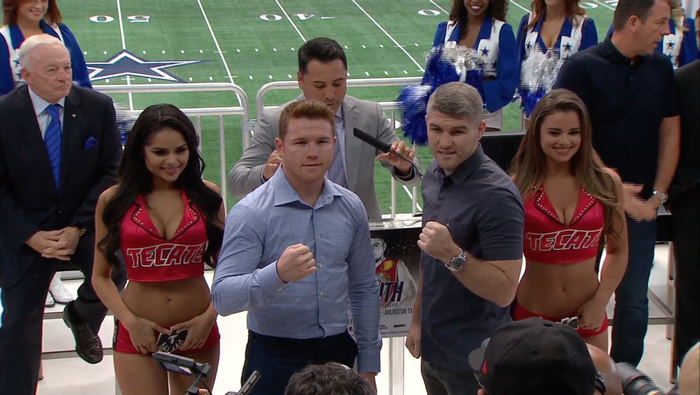 Saul “Canelo” Alvarez’s next fight will be against Liverpudlian Liam “Beefy” Smith for the latter’s WBO super welterweight title at AT&T Stadium—the home of famed NFL franchise the Dallas Cowboys.

It’s not exactly the fight everyone was clamouring for. Alvarez, who vacated his WBC middleweight title to buy himself and promoter Oscar De La Hoya some time in negotiating a fruitless fight contract with Gennady “GGG” Golovkin, the opponent the world wants, was last seen in the ring knocking out an undersized Amir Khan in devastating fashion.

However, the fight against GGG never materialized, and the middleweight division is now in a state of flux. Canelo is moving back down to super welterweight where he captured WBA and WBC gold before being outclassed by Floyd Mayweather Jr. Meanwhile, Golovkin, the pride of Kazakhstan will now be fighting British-born IBF welterweight champion Kell Brook. At least the latter contest is still in the middleweight division.

Though undefeated, Smith will be making a gargantuan step up in class against Alvarez on September 17th. The Scouser won his title last year by knocking out John Thompson inside seven rounds. Few can fault Smith for showing the cajones to take on such a high-profile fight when considerably outmatched on arguably the largest boxing stage in the world. But, people expect better of Canelo.

The press conference promoting this fight was a bust. There were tens of minutes spent listening to all types of boxing bureaucrats and figures. There was even a five-minute long birthday celebration for Canelo—a man who is often credited with an unshakeable confidence, reduced to an embarrassed, wry smile as his rosy-red cheeks matched the shade of his hair.

One part of the press conference rankles more than any other. Some of the comments made by De La Hoya were baseless and outright untrue. Sure, he was doing his job as the figurehead of Golden Boy Promotions. But, comments such as “Texas has the best commission” isn’t a part of his remit other than to schmooze and stroke the egos of those present in Dallas that day. Let’s not forget this particular athletic commission was the one who licensed Antonio Margarito for his fight in Cowboys Stadium against Manny Pacquiao after his ban for being caught deliberately loading his gloves by the California commission.

In promoter mode, De La Hoya described Smith as “the most popular fighter right now in the UK.” That statement would be true if the UK didn’t have world champion fighters such as Anthony Joshua, Tyson Fury, Michael Bisping and GGG’s aforementioned opponent in Brook. Hell, even Canelo’s last opponent in Amir Khan has a load more pull in the UK than Smith ever has.

We know you’re trying to sell the fight, Oscar. But, with Canelo competing on the weekend of Mexican Independence, do you think unfounded hyperbole about a relatively unknown British boxer will push that buy-rate up?

Just like before the Khan fight, Canelo and De La Hoya are having insults and accusations volleyed their way for supposedly cherry picking opponents and actively avoiding a fight against Golovkin. On the defensive, that’s exactly what Canelo accused his Kazakhstani foe of on Monday.

“All of his opponents have been the easy road,” Alvarez told RingTV. “He has never fought someone who has really pushed him or taken him to the next level. All of his opponents have been easy opponents. Brook is going up to weight classes [to face Golovkin]. I only made Amir Khan go up one weight class. People say it was two but it was only one and this guy Brook is moving up two to fight GGG at 160lbs. That’s a reason why it’s good not to speak or make comments on things that are out there.”

There may be some semblance of truth to Canelo’s argument. However, it smacks of “whoever smelled it dealt it”, with Canelo unknowingly admitting the faults of his last in-ring foe.  It also fails to address that Brook is a respected welterweight world titleholder who Khan actively avoided to fight during his pomp—fresh off winning welterweight titles and Olympic Silver in Athens back in 2004—and throughout the rest his career.

If Kell Brook is that bad an opponent, what does that make Amir Khan?

Matthew Macklin, Smith’s mentor, finished off his obit at the press conference by saying: “After September 17th, the whole world will know who Liam Smith is.” Let’s hope this rings true after the fight and the Englishman is known as a competitor, rather than cannon fodder as expected.