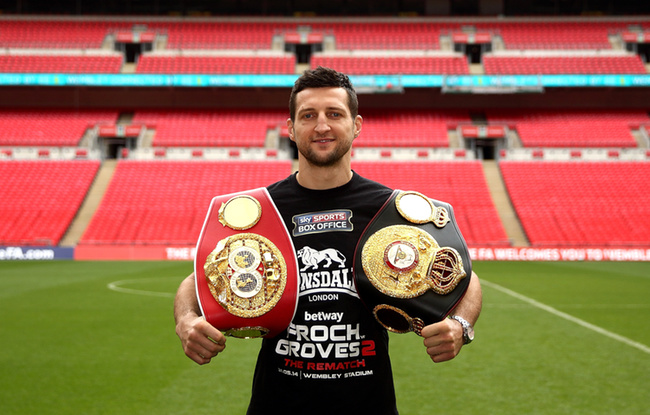 Former three-time super middleweight champion Carl Froch has officially retired from the sport of boxing. Announced this past Monday on the fighter’s social media feed, the 38-year old will now go onto to use his expertise as a boxing analyst for Sky Sports.

“I’m incredibly proud of what I have achieved in boxing but now is the right moment to hang up my gloves,” Froch told Sky Sports. “I have nothing left to prove and my legacy speaks for itself.”

That legacy includes a rather impressive resume of wins over the likes of Jean Pascal, Jermain Taylor, Arthur Abraham, Mikkel Kessler, Andre Dirrel and Lucian Bute. Froch also acquired the WBC, WBA and IBF titles in that run, though never holding them all at the same time to become “Undisputed”. His first major win came when he won the WBC belt against the Canadian Jean Pascal, but American audiences didn’t fully become acquainted with “The Cobra” until he knocked out Jermain Taylor in a come from behind victory back in 2009. He then placed second in Showtime’s “Super Six Tournament”, losing in a valiant effort against none other than Andre Ward. Despite the loss, Froch went on to recapture two title belts and closed his 13-year career with a second win over George Groves, a rematch that took place to clear a controversial stoppage-decision that clouded their first encounter. Overall, the Englishman compiled a final record of 33 wins, 2 losses with 24 KOs.

But what made me a fan of Froch was seen not only in his wins, but in his losses as well. He made no excuses when losing to Ward, and gave the former Olympian full credit in being the better man the night the two met. He held a similar attitude when he lost to Kessler a year earlier, and was a complete gentleman before, during and after their rematch in 2013, a bout in which Froch won convincingly. What was also notable about Froch was his willingness to travel to the opponent’s home turf to fight for a belt. He did it against Kessler, Abraham, and Ward, and never complained about it once, just showed up and fought his ass off in exciting fashion. Safe to say, Carl Froch was a fair fighter.

Fans are now disappointed in the potential bouts that have now dissolved due to his retirement. The former champ had been set to face off against Mexico’s Julio Cesar Chavez Jr. before a shoulder injury forced a postponement, and the nail was put further into the coffin when Chavez Jr. lost by KO this past April. Rumors had also been floating around about potential bouts against the much-feared Gennady Golovkin or the current IBF successor James DeGale, but with over a year of inactivity from the ring, and nearing the 4th decade of his life, the Nottingham native thought better to walk away from the sport, physically and financially in tact. That’s another thing we don’t see enough of in boxing.

The other topic being discussed is whether or not Froch will make it into the Boxing Hall of Fame. While his resume may not shine in comparison to the legends of past, some of that is due to the lack of attention given to the super middleweight landscape during the time he was active, and given that, Froch fought just about everyone who meant anything in the division. He should also get some credit for the way he’s gone about his fights: traveling onto enemy territory, rarely complaining about terms, admitting when he lost, and offering rematches when the wins were questionable. If the Hall of Fame based any part of its selection on character conduct, then Carl Froch makes a strong case for being let in.

Overall, Froch wasn’t the most gifted boxer, but he made up for any technical shortcomings with courage and a willingness to trade inside the ring, as seldom is a fight involving “The Cobra” a boring one. While he won’t go down in history with the most accomplished career, he should be remembered as having an honest one, and that alone should warrant his decision to retire. At least in my opinion, he’s very correct in saying that he has nothing left to prove in the sport of boxing.

Canelo Alvarez vs. James Kirkland: Why It Matters