Carlos Condit and the Art of the Elbow 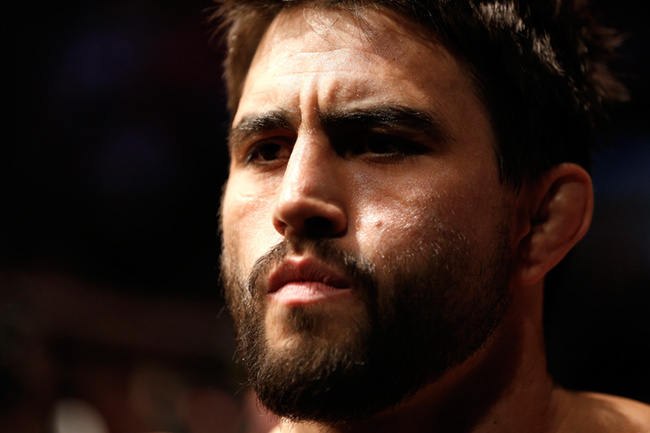 Elbow strikes are criminally under utilized in mixed martial arts competition. Within the UFC I would hazard that the majority of elbows are thrown on the ground, and within those most are the kind of “stay active”, short and ineffective elbows which Nick Diaz has been so critical of.

Carlos Condit is, on the whole, a fairly inaccurate puncher. He has a reach on almost everyone he fights, yet steps in leading with right straights and left uppercuts. Most of his punches really only serve to set up his biting kicks.

Seemingly midway through his bout with Thiago Alves, however, Condit had the lanky man's epiphany—in punching range, longer limbs leave bigger physical openings and longer lag times. But elbows... they're twice as damaging and half the length.

Each time Condit ran in with his hands, Alves did what Alves has always done, he moved his head and threw back. Condit came off the worse every single time. Suddenly, seconds into round two, Condit ran in almost chest-to-chest and Alves flew to the mat. Alves' back had concealed the blow from the camera, but it came to light that it had been a tremendously close range upwards elbow. The kind you see in old karate forms and think “what, are you going to hit them in the sternum?”

From then on, the bout was a barrage of elbow strikes. I have always called Carlos Condit the greatest opportunist in the division. Once he sees something work, he will exploit it ruthlessly until the fight is over or the opponent adjusts. Of course, it's difficult to adjust when someone has just spread your nose across your face like Nutella and you're eating more shots before you've had time to finish reflecting on the first.

Alves fought on gamely, but the elbows kept pouring in. The fight was called off at the end of the second round, which was disappointing because Alves was shaken but not done, and his vision didn't seem to be compromised—though, of course, I am always keen for physicians and corners to prevent further damage, rather than call off a fight following a catastrophic beating.

The elbow can serve many purposes and that is what makes it so dangerous. If you use the point of it, and you clip an area of thin skin—the brow, around the eyes—it will cut an opponent like a razor. The great Kenny Florian could slice a man up with elbows like no one in MMA history. There are professional boxers who would kill to make the kind of cutting connections Kenflo made in his prime.

Yet the elbow can also hurt a man in a way that very few punches do. While it is true that longer strikes can build up tremendous speed—as the end of a whip does—knee and elbow strikes are far more directly connected to your center of mass. Getting as much of your bodyweight into a punch as possible is a skill which takes ages to learn—you can smash a bag with respectable force with an elbow from day one. Better yet, see how easily you can move a heavy bag with just a shoulder bump. The less joints involved, the less opportunities for power to be lost in timing the co-ordination of said joints.

UFC first timer, Darren Till didn't look tremendously varied or thoughtful on the feet, but his takedown defense was absolutely on point. When he sprawled on Wendell Oliveira and ran through him to get on top, Till trapped Oliveira in half guard, as so many elite ground and pounders love to, and proceeded to get to work with the elbows. Elbows from top position again benefit from the limited number of joints—the full weight can be dropped on the opponent in an elbow, if you're arm's length from the opponent in his half guard, you're going to struggle to punch him with any weight. As Oliveira underhooked Till's far leg, as one would to enter deep half, though he seemed to be wanting to invert for a knee bar, he demonstrated amply the difference between grappling and MMA. Till sat back, and reigned down elbows on Oliveira's head as now both his left leg and arm were pinned in position.

Perhaps the most interesting fight of the night, for me, was also easily the worst. Ryan Jimmo versus Francismar Barroso. There's no two ways about it, Ryan Jimmo is a boring fighter and has had a reputation as one for a long time. But why?

Well, his fights almost invariably consist of a lot of clinching... but if you watch the bouts that isn't what he wants. He moves like Machida. He's a big, strong, fast guy. There's no reason he can't do what Machida has done—Machida is an example of the power of timing, not of magical speed or hitting ability.

I've seen Jimmo walk fighters into the same sort of traps that Machida does, baiting the chase and then slamming them with a straight. I sat in press row for his bout with Manuwa and thought “he's doing really well... between the clinches”. The two major differences in the distance karate counter games of Jimmo and Machida that I can put my finger on are that:

1. Jimmo moves directly backwards, where Machida has learned to cut his hips out to an angle and stay off the fence.
2. Jimmo is more active.

The first is fairly self explanatory. If you step backwards every time your opponent steps in, something you have to do if you want them really running onto you when you decide to counter, you're going to hit the fence eventually. You hit the fence; you get dragged into a clinch. A clinch is not where the karateka wants to be.

Circling out once you hit the fence only works if the opponent is making some real mistakes.

The second one is a lot weirder. How can the more active fighter be worse off? He's not gassing himself out, so what's the issue? When Machida is out in the open, there's feinting and there's running, but there's not much attacking except the occasional body kick, and then he's really trying to hurt. When Jimmo is out in the open he is circling and pumping the jab, kicking the legs, staying busy.

To set up the long-term counter game, it's important to be inactive. Lyoto Machida and Anderson Silva would do nothing of note for minutes at a time, until their opponent ran at them. That karate style, long term counter game—looking to land that one significant counter every few minutes—relies on not much happening the rest of the time.

If Jimmo learned to circle before he felt the cage, he could avoid getting tied up in the clinches which have given him a reputation as a boring fighter and taken time away from his main task of setting up that big reverse punch.  If he attacked less with jabs, opponents wouldn't feel they had to worry about stepping forward—the false sense of security, and the frustration of having an opponent who is reluctant to engage, are vital to the success of the long term karate style counter game.

I feel Jimmo was done a tremendous disservice in the bout against Barroso, however. After taking a cringe inducing kick to the cup—more accurately, across and through the cup—Jimmo was left wretching on the floor for minutes before being able to rise to his feet. Having taken the full five minutes permitted to recover, he continued and looked to be struggling with the pain. Not to mention the effect that this kind of shot to the nether regions will have on breathing.

If a fighter is dry heaving into a bucket, it's probably worth stopping the bout. It was an accidental blow, it could be called a no contest, no need to blame Barroso—but to pretend that a punt across the plums won't significantly impact a fight just because a fighter has had five minutes to recover seems daft.

The sole difference between Jimmo and Machida is ringcraft. Physically, Jimmo is as gifted as anyone who ever fought in the UFC. Whether he sinks or swims in the coming fights is down to whether he recognizes how often he runs straight onto the fence and into clinches, and—to an unfortunate degree—on if he is fortunate enough to avoid things like this:

Thiago Alves: Return of the Pitbull