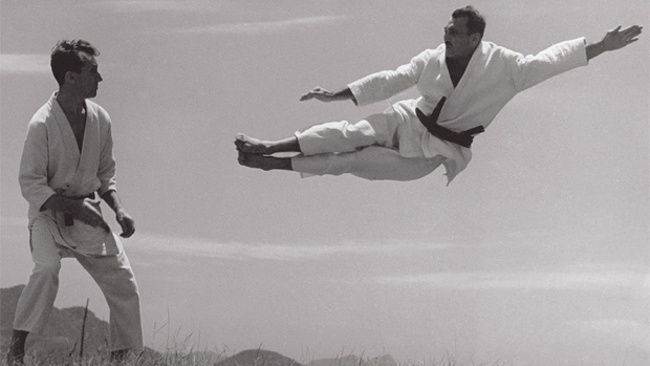 The release of a biography Carlos Gracie, The Creator of a Fighting Dynasty, by his daughter, Reila Gracie, recounts a family epic, with a sober look at the intellectual father of modern jiu jitsu and—if nothing else—should settle the wiki-wars as to the prominence of Carlos Gracie in the cosmology of modern fight history.

The book, a translation of the version originally published in Brazil, is a sweeping narrative, quasi-biblical in its scope of characters, taking us into the Olympus of Gracie jiu jitsu and modern MMA, through Brazilian political and sporting history, and above all, the family. The fight family which emigrated from Scotland to northeastern Brazil, then to Rio making a mission of spreading their style of jiu jitsu, with Carlos and his four fighting brothers as spearheads.

Reila has a paused, deliberate demeanor, the kind it would take to do over 400 interviews that yielded 550 pages (plus photos) documenting the life of her father, born in 1902 in northeastern Brazil (Belém do Pará 1902-1994). The full launch of the book will be in January, but it can now be acquired via selected outlets.

The history of the Gracie fighting dynasty hinges on patriarchs Carlos and Helio, and cannot be complete without chronicling the role of its many members, as the history of Rome involves not just Romulus and Remus, but many emperors and characters. Passages reference the Behrings, the Machados, Waldemar Santana and many family quarrels: between Helio and George; Robson and Helio; Rolls and Rorion and Rickson and Rorion. As such, sometimes it's difficult to keep up with the cast of characters. But readers should allow the narrative to flow like a river, and it should trigger pleasure centers in the brain for those who revere the Gracie name and family. 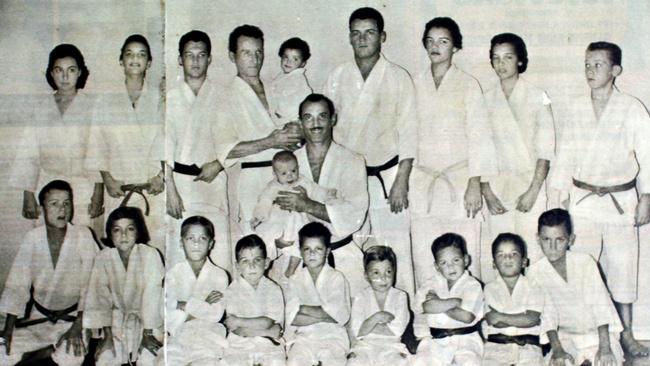 There are some great nuggets for those interested in Gracie lore: Carlson's birth name was Eugenio; also, grandfather Gastão Gracie sold dynamite in Belem on the side, and anytime there was an suspicious explosion in town, authorities were knocking at his door.

The narrative lags a bit in the recounting of fights, tournaments and challenges, but thickens when it comes to the relationship between the family members.

The book clarifies—for those that were in doubt—as to who was alpha between the two patriarchs, and elevates the prominence of George, who fought the most contests. "Helio was important. So was George, who fought more than anybody. People don't know that," asserts Rilion, the youngest son of Carlos' 21 children and a black belt teaching in Miami.

Reila chronicles her father's eccentricities and spirit: family was primordial and the concept of paternity was different from society. Carlos thought nothing of having his children live with Helio or taking in his brothers' offspring to raise.

"For Carlos, more important than the concept of paternity per se was the solidification of his concept of family, which was very unconventional," she writes. Carlos was eccentric, to say the least. And there are some bombshells.

According to Reila's history, Carlos wore only white linen and consulted a Peruvian master spirit by the name of Lasjovino. Carlos was a bigamist, only had sex to conceive, and women understood that they were to allow Carlos' family to raise the kids. He engineered a way for Helio to have biological children, and Rickson's biological mother is not Margarida, Helio's wife (something insiders say Rickson only learned as an adult). Also, Carlos had a convoluted symbiosis with best friend Oscar Santa Maria. 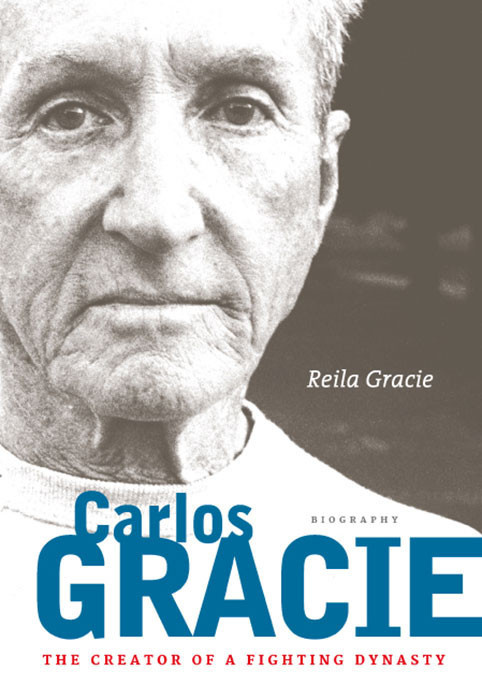 For reasons explained in the book, Carlos sent his son Rolls to live with Helio, and Rolls—who had the charisma and fighting skills to be the family "champion" and future leader of the clan—called both Carlos and Helio "pai." Reila recounts how Helio would favor his biological son Rorion in the intra-family "trainings," but Rolls would consistently prevail.

Descendants describe how the family home in Teresopolis, with 21 rooms in the mountains near Rio, became the family headquarters and a jiu jitsu laboratory with the number of children, cousins and guests constantly rolling and testing techniques.

Rolls's adventurous and competitive spirit led him to compete in sambo, wrestling, catch wrestling, boxing, surfing and ultimately reveal Gracie jiu jitsu to Americans in San Diego. The death of Rolls (who had the personality seen in Renzo and the intensity of Rickson) in a hang-gliding accident, provoked a large fissure in the family. A harsh remark from Helio at the funeral hurt feelings, an episode which still infuriates Rolls's widow, Angela. Another big wedge was Rorion's attempt to trademark the "Gracie Jiu-jitsu" name in the U.S. to the exclusion of other family members.

The book has its flaws: it could use tighter editing and copy-editing and with so many characters, an index (present in the Brazilian edition) would help keep track of all the fighters, family members and characters in the plot. But in the greater scheme, this is nitpicking, for Reila shines a light on the early days of the transition of Japanese jiu jitsu taught by Mitsuyo Maeda to the art that became Gracie jiu-jitsu (later Brazilian jiu jitsu) and, curated by the extended Gracie family, emerged from Brazil to conquer the fight world.

As Carlos masterminded his family's battles with the capoeristas, the wrestlers, Japanese masters, and luta livre practitioners, he became more interested in mysticism, and detached from fighting and teaching. He observed nature and delved deeper into numerology, the dietary canons which all the children had to follow and became the "Gracie Diet." All designed to conserve energy, keep blood pH neutral and extend stamina and provide long life. 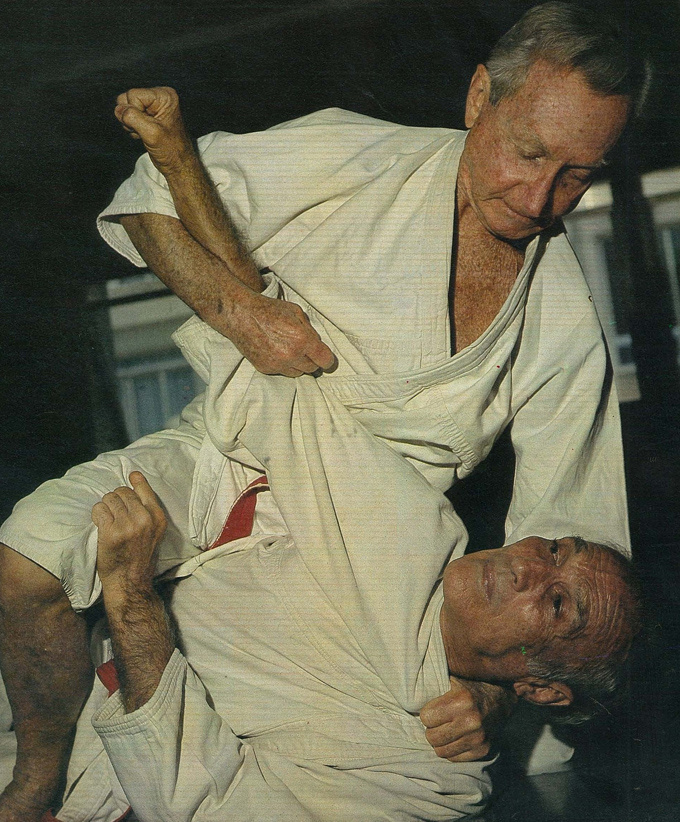 Alpha and Omega: Carlos and Helio

Like a pride of headstrong lions, each Gracie in the family tapestry has their role. Celebrated fighter Helio was a faithful believer and follower of Carlos' instructions and vision. Carlos was the patriarch of the family, and Helio was his first champion. They were - to borrow a term—a tag team, and only when older did Helio deny that Carlos was the protean figure. Carlos and Helio were partners, perhaps in the same manner that Royce and Rorion Gracie were a partnership in the early UFC, meant to show the efficiency of Gracie jiu jitsu to the world.

"Helio would go see a building to set up an academy, and if Carlos didn't like the aura or address, he would veto the space without setting foot in it," Reila recalls. "Helio would consult Carlos even to ask what color car he should buy."

Reila, whose low-key demeanor is mirrored by her son Roger Gracie, includes a helpful tool: a family tree that helps neophytes and experts of the clan equally. Completing such a book requires enough detachment from her father to not blindly mythologize the patriarch. The book will be of interest to fighters, doctors and alternative healers, grapplers, fight historians, yoga enthusiasts, nutritionists, and others. There are also pictures that show young Carlson, Rickson, Rolls, Crolin, Carlinhos and many more, and give great peeks to the past. 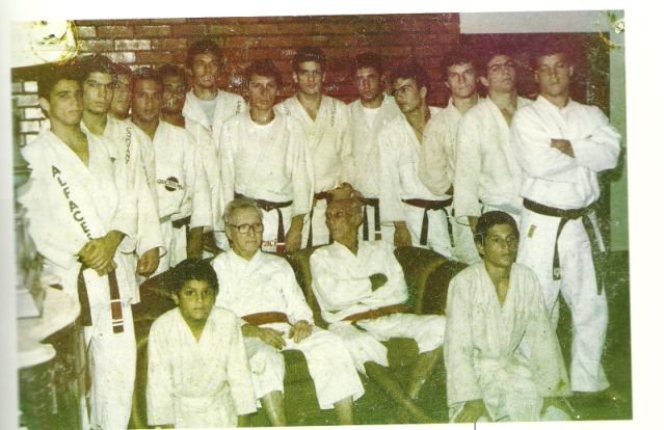 The jits genie is out of the bottle, and Reila does not discuss what Carlos thought of the UFC. But reading between the lines, it is evident that the public is consuming the brutal nature of MMA without fully understanding the ground grappling, much less seeing the benefits of the jiu jitsu or martial arts lifestyle.

That was the incremental Faustian pact made by the family as they revealed their secrets to the public: Helio's matches with the Japanese masters like Geo Omori and Masahiko Kimura, and Waldemar Santana; vale tudo matches by Carlson; Royce and Renzo in UFC and Pride, and on to the present day.

When it came to presenting their soft martial art to the whole world - the early days of the UFC - what good would it have been if they sent the family champion or toughest of the lot, Rickson, to prove the superiority of Gracie jiu jitsu?

However, the American version of the narrative was shaped greatly by Helio's son Rorion, who had the best command of English and a de facto partnership with Royce in the establishment of the UFC. "Rorion was very important," notes Reila.

Believing that publishing in the U.S. is the key to spreading any message worldwide, Reila says she was asked by potential publishers to add chapters on the UFC, but she chose the self-publishing route. "I wanted to focus on the creator of the movement." 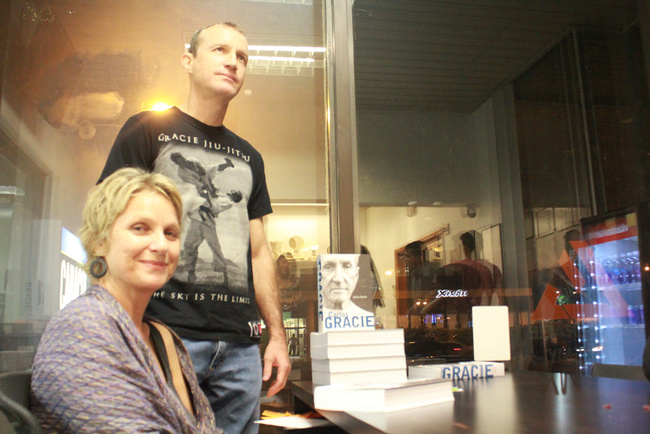 The mantle of fight visionary is now in the lap of UFC honcho Dana White, whose love for fighting - boxing particularly - has propelled the UFC into global prominence. White knows knockouts sell tickets; the Gracies believe the UFC rules undermine the finer points of their art. Fighters contesting positions and angles on the ground get stood up to appease booing fans. "The way fighters are taped these days," laments Rilion, a doppelganger for Rolls who can be seen in the background of Royce's corner in the early UFC and was acknowledged to be the finest guard technician in the family, "they can punch a hole through a wall."

"[The book] speaks of many good things, and other bad things too," says Rilion. "There was a lot of controversy in the family. Helio was important, as was George. My father and the first Gracies were ready even to die for jiu-jitsu."

Maybe the Gracies' MMA fight hegemony has been broken the same way Brazil's dominance in soccer is now in question. As the Gracies try to regain prominence at the highest levels of the future fight game—now with Kron—the legacy is intact.

Perhaps, most valuable information for readers lies in the final pages, a list of 12 commandments or life lessons that Carlos imparted and lived by, refined from Buddhist monks to Chinese and Japanese masters, and through Maeda and Carlos: "Be so strong so that nothing can disturb your peace";  "give all your friends the feeling they are valuable"; to "think the best, work solely for the best and always expect the best."

Thanks to Maeda, the Gracies, and the fighters that have devoted their lives to learning or teaching BJJ, or those who have acquired the art to complete their arsenal... thanks to them, jiu jitsu lives, perhaps forever.

Waldemar Santana: A Challenger to the Gracie Throne