By Willard Ford and Steve DeBro 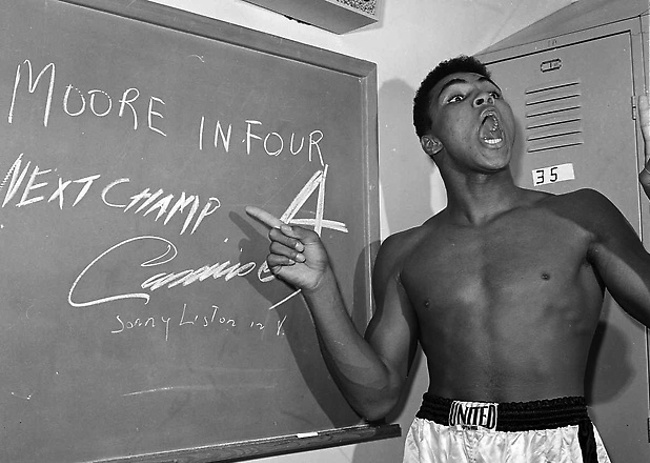 “What she did, all that publicity, got me thinking—you’ve got to be colorful, and you’ve got to promote if you want to sell tickets. Mrs. Eaton taught me that and I’ve been campaigning ever since.” Muhammad Ali

Before he became Muhammad Ali, Greatest of All Time, Cassius Clay had an important but largely forgotten period in Los Angeles that helped shape his public persona and transition him from amateur champ to international superstar.

Clay was a promising young heavyweight, on a roll after winning a gold medal in the 1960 Olympic Games in Rome. Aileen Eaton was the impresaria of boxing and wrestling in Los Angeles, a tough and brilliant promoter and businesswoman nicknamed "The Dragon Lady" who had a knack for using whatever means necessary to sell tickets. She created Gorgeous George, the first wrestling superstar (way before Hulk Hogan and the WWE), promoted the bulk of Art “Golden Boy” Aragon’s fights in the 1950s, and ruled the West Coast boxing scene with an iron fist and velvet glove. Clay was talented and brash, but his promotional talent and presentation was still a little rough around the edges. 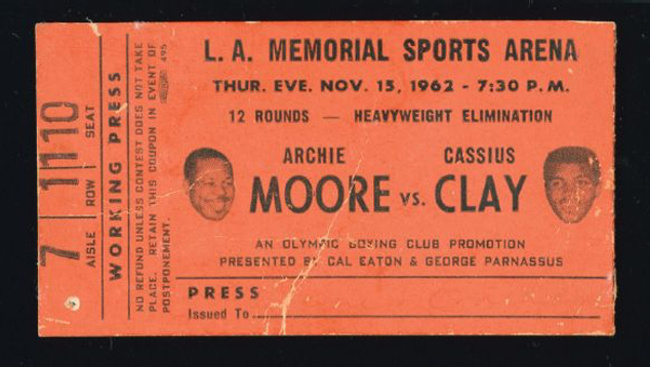 Eaton booked Clay to fight several matches at L.A.’s Sports Arena, including a “changing of the guard” fight against the aging former heavyweight champion Archie Moore. To promote the fight, she had Clay do his road work on the streets of downtown L.A., running from the Main Street Gym to the Olympic, with a Cadillac full of journalists trailing behind and a banner on the car. She created buttons that read “I Am The Greatest” and had Clay hand them out to passersby.

Clay was fascinated by wrestling, and she had him watch the audacious pre-fight hype of “Classy” Freddie Blassie (who later became famous for the song “Pencil Necked Geek” and Andy Kaufman’s “My Breakfast With Blassie”). Clay was a quick study; he tuned into the hype, rhythm and rhyme of Blassie and the other wrestlers and began to marry his confidence with show biz schtick to become a box office star.

Before the fight, Clay said “Archie Moore will fall in four.” True to his word, Moore was TKO’d in the fourth, bringing Clay’s professional record to 15-0. In less than two years, he’d beat Sonny Liston and claim his first crown. Eaton continued to dominate West Coast boxing, wrestling and roller derby out of the Olympic Auditorium for another two decades, passing away in 1987. Throughout the years, Ali and Eaton remained friendly, but never worked together again.

Willard Ford and Steve DeBro are producing The Olympic Auditorium Project, a documentary film and cultural history project telling the story of the fight scene in and around downtown L.A.’s most violently entertaining venue. You can get more information and support their Kickstarter campaign here.