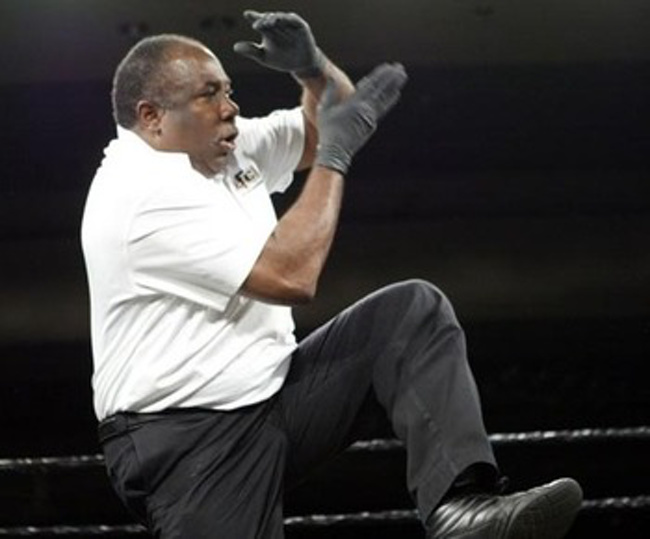 You could be forgiven if you didn’t know April 11 was Cecil Peoples Day. That's not a joke: two months ago, the Martial Arts History Museum in Burbank, California, held a day of tribute to Peoples, the karate master and commission-appointed MMA punch line who once said that leg kicks don't finish fights. A press release for the event highlighted Peoples' transformation from point fighter to full-contact champion before calling him "one of the most notable and recognized mixed martial arts referees in the business."

Besides being a perfect case study in the meaninglessness of the word "notable," that's about the most generous way you could describe Cecil Peoples, who most of us know as the worst MMA judge of all time. Judging and refereeing are both thankless jobs; the best performances go unnoticed or forgotten while the worst become message board punching bags. But with every asinine score card he turned in, Peoples became more of a legend: it's like he went out of his way to take our collective perceptions of a fight, lift them into the air, and drive a figurative knee into their figurative spines. Peoples seems to have quietly left his old posts behind—he hasn’t judged an MMA fight since 2013—but he's secured a legacy based on blunders and one of the most bizarre pre-fight gestures a referee could turn into his calling card.

Still, sins fall along a spectrum, and it doesn’t take a hero to deliver retribution. Earlier this week, Reddit MMA dug up a Peoples-related gem from the March 1992 issue of Black Belt magazine entitled "Brawl Breaks Out at Kickboxing Match", highlighting the time Peoples reffed a World Kickboxing Association card in Vegas between champion Hector Pena and challenger Roney Lewis. After Lewis threw one too many illegal blows, Peoples deducted a point, and Lewis responded with a shove. Then this happened:

"At the end of the round, Peoples went to Lewis’ corner to reprimand him, but Lewis responded with a front kick to Peoples’ groin.

Peoples followed with a punch that chipped one of Lewis’ front teeth. As handlers rushed in to break up the fight, one of them picked up a corner stool and threw it at a group of people, hitting several of them. Other individuals who appeared to be Lewis supporters began charging the ring and security officers. One of Lewis’ handlers hit WKA President Howard Hansen in the head as he tried to protect a female timekeeper from the ruckus.

When a semblance of order was finally restored, the ring announcer facetiously raised Peoples’ arm as the winner, and the crowd responded enthusiastically. Lewis was fined $200 and given a 45-day suspension for his actions."

The third man is the first line of defense against disorder in combative sports, so if that penalty sounds too light for flagrantly booting a referee in the pills and starting a near-riot in the process, well, yeah, it is. (Then again, there was that time when Phil Baroni punched referee Larry Landless after prematurely stopping his first fight with Evan Tanner, and the referee apologized in writing to Baroni and, for some reason, his girlfriend.) The damage to his tooth was arguably the most serious consequence that Lewis faced. Peoples was a terrible official, but in the same realm where he made so many unjustifiable decisions, it's nice to know he did something totally justified.

If you're wondering, Pena kept his title via disqualification. And as for Lewis, besides facing the athletic commission's review, he learned a lesson that bears repeating: if you hit the referee, don't be surprised when he hits back.

Fightland Talks To: A First-Time Referee