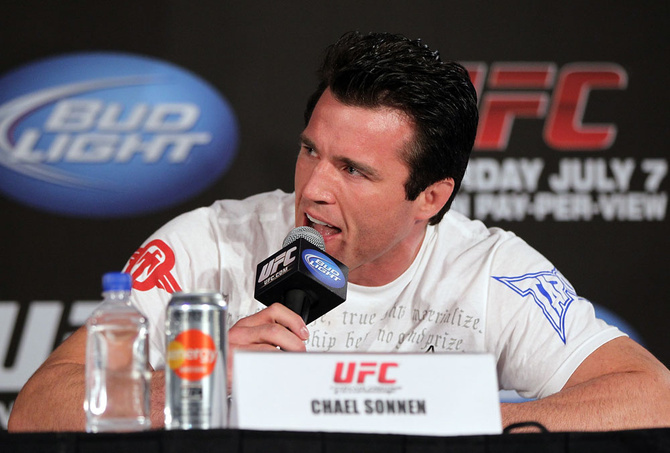 Last night on The Ultimate Fighter, team coach and contender for the light heavyweight championship Chael Sonnen put even more distance between himself and second place in the race to be the most compelling personality in MMA. As he has all season, Sonnen dropped his goading, couplet-rhyming, master-of-self-promotion shtick while in the gym. His advice to his fighters throughout the season has been supportive and decent, even vulnerable. At times it’s even tended toward the philosophical. Last night was such an occasion.

Gathering his team together before Kelvin Gastelum’s fight with Bubba McDaniel of Team Jon Jones, Sonnen acknowledged that Gastellum, like all fighters, was probably scared. But it would be the wrong approach for his fighters to try to tap into some other emotion in order to conquer that fear, he said. Instead, actions win fights:

“So many times we try to find the right emotion. What emotion is going to help you?” At this point Sonnen held up both his fists. “This is what helps you. Forward motion, getting your legs back, getting up off the bottom, working the whole time: Those are actions. Not one of those was an emotion. Anger, happiness, sad, fear, scared: Not one of those is going to get a judge to mark your name.” Sonnen lifted his fists again. “This is what marks your name. Actions.”

Listening to Sonnen’s speech I was reminded of a profile of Deadwood creator David Milch I read years ago in which the writer, gambler, obsessive, ritualist, recovering substance abuser, and creative volcano explains that he never conceives of a scene before he writes it because, he says, of the old expression: “You can’t think your way to write action; you can only act your way to write thinking.”

Now, ask William James, the American philosopher and pioneering psychologist, or even a recovering alcoholic who’s been through AA, and they’ll tell you the phrase goes something more like “You can’t think your way to right action; you can only act your way to right thinking.” But whether the author of the New Yorker piece misinterpreted what Milch was saying or whether Milch was having a little bit of literary fun with what he admits is just a “highfalutin’ expression” doesn’t matter. What matters is that he and Chael Sonnen are right: Whether you’re a writer or a fighter, planning is all well and good, but you won’t know how well you swim until you jump off a bridge. As a writer and part-time MMA punching bag myself, I can only attest in my small way that the bridges are equally high and the waters equally perilous.