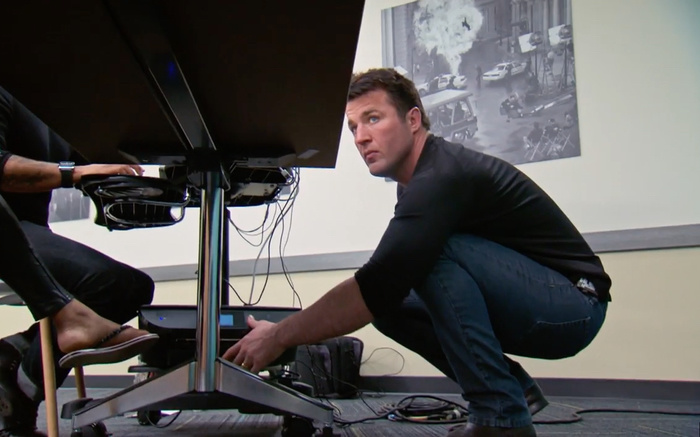 This past Monday on Celebrity Apprentice, former UFC star Chael Sonnen bought his struggling team some extra time to complete a challenge by “creating” a “technical difficulty.” With his teammates huddled around a computer and precious seconds ticking away, Sonnen slipped behind the desk and with all the cunning of a fox snipped the cord with a pair of scissors. The computer went dead and Sonnen’s team panicked, but the extra time was theirs. “In spite of the heroic and brilliant move on my part I didn’t feel like a big hero,” Sonnen admitted later. Surely his teammates would disagree.

People being people, though, and the laws of reality television being what they are, Carson Kressley from Queer Eye for the Straight Guy and former WNBA star Lisa Leslie let their personal animosity blind them to the good deed Sonnen had done for them, and when they told host Arnold Schwarzenegger about the mixed martial artist’s “creative” move, he kicked Sonnen off the show on the spot.

“In my world this is not a grey area,” Schwarzenegger said. “I will not tolerate cheaters in my boardroom.” And with that, Chael Sonnen was gone.

Can’t you see now, Chael, that your problem was entirely about timing? That on any other season of Celebrity Apprentice such tactics would have been lauded rather than vilified? That if the host of the show were still Donald Trump and not Arnold Schwarzenegger you would not only still be in the game, you’d be sitting by the master’s side by now, his right-hand man, assured of victory? How strange that in the very week president Donald Trump was forcing his brand-new press secretary to lie about the size of the crowd at his inauguration and his trusted advisor Kellyanne Conway was introducing “alternative facts” into the lexicon, an avowed Donald Trump supporter was getting kicked off Donald Trump’s own television show for committing just the kind of brazen fraud and linguistic trickery that would earn him a job in Donald Trump’s White House?

Not that we really believe you cut that cord, Chael. Oh, we watched you crouch behind the desk, sure, and we saw the scissors sitting there, but we never actually saw those scissors in your hand and we never saw that cord get chopped—just like we never saw Tito Ortiz lock in that rear-naked choke you tapped to during your fight two days earlier (a fight you walked out to in a “Make America Great Again” shirt, by the way). All we saw were the faces of your teammates, who apparently don’t notice you crouching there conspiratorially not 18 inches away, followed by a small burst of light and an electric-shock sound effect you can find in the files of any Hollywood Foley artist. The whole thing seemed suspicious. But the next thing we knew Lisa Leslie was telling us she saw you standing there with the scissors clear as day, like the kid with his hand in the cookie jar. “I’m really in shock because I’m thinking he just cut the cord to the computer but I didn’t see him cut the cord but I saw ...” Leslie said. “It was just like somebody bleeding, somebody had a knife; somebody just got stabbed and you’re holding the knife—you clearly just stabbed that person!”

Sorry, Lisa—not anymore. You’re thinking very 2016. In 2017 in America, a person will look you straight in the eye and tell you A is B and expect to be believed. He will tell you cheating isn’t cheating, that a squeeze is a choke, that millions of people voted fraudulently, that a roomful of trained reality TV cameramen can fail to film a man slicing a computer cable with a pair of scissors, and that facts have alternatives—that a bloody knife isn’t a bloody knife.

“This wasn’t cheating … I gave us a technical difficulty,” Chael Sonnen told America after cheating Monday night. It was just the kind of double-speak that will no doubt land him a job in Trump’s cabinet within the week. Maybe I’m wrong, Chael: Maybe your timing was perfect after all.

Tito vs. Chael: Taking the Art out of Mixed Martial Arts