Chael Sonnen Wants to be a Referee Now 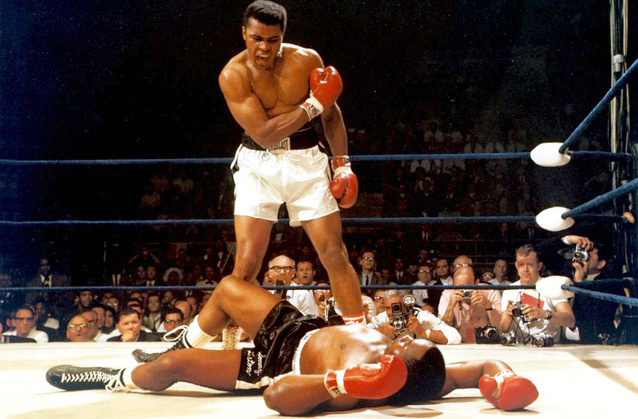 The second fight between Muhammad Ali and Sonny Liston has become one of the most iconic events in sports history. From the debatable legitimacy of Ali’s “phantom punch” to Neil Leifer’s legendary ringside photo of Ali taunting a prone Liston, the fight has become, in the way that moments will in the blurring fullness of time, something mythological, even mysterious, and significant: the fast-talking golden boy with the strange and scary religious affiliation whipping the terrifying bruiser with a single punch and ushering in a new brash era with him, a one-man Beatles closing the door on one age and ushering in the next.

At the time, though, Ali/Liston II was a debacle. Almost as soon as Liston hit the canvas, writers and fans began screaming that the fight was fixed, that the former champion had thrown it—either because he had bet on Ali or because he owed the mafia money or because he was afraid of retribution from Ali’s friends in the Nation of Islam. To many, the fight was yet another stain on an already corrupted sport, one that for years had been run by the mob and other unsavory characters. And it didn’t help matters that the referee that night--who failed to get Ali to a neutral corner, who failed to start his count when he was supposed to, who didn’t realize Liston had been down for at least 20 seconds before letting the fight continue, and who then stopped the fight a few seconds later and declared Ali the winner by knockout--was himself a former heavyweight boxer. “Jersey” Joe Walcott may have been a great champion in his day, but that night he became living proof that boxing’s sentiment-fueled tradition of allowing guest referees to officiate big fights was doing nothing for the integrity of the sport.

Yesterday, UFC light heavyweight Chael Sonnen, who has spent the last two years turning MMA media into his own private playroom (complete with fake commercials, outlandish rants, even poetry readings) and perfecting the art of making his opinions essential listening--the king of MMA rabble-rousing, trash-talking, carnival-barking, self-marketing, and wolf-ticket sales--tried on the latest in a series of hats: That of the paragon of impartiality, offering his services as a referee for the upcoming Anderson Silva fight, a man he spent years hounding, mocking, toying with, and nearly beating.

During an interview ahead of his fight this weekend with “Shogun” Rua, Sonnen told MMAFighting’s Ariel Helwani that he would be putting in an application with the Nevada State Athletic Commission to ref the rematch between Silva and new middleweight champion Chris Weidman at UFC 168. It’s an idea that’s so absurd—an active fighter officiating a main-event fight featuring a man he’s lost to twice and for whom he’s make no secret of his displeasure—it sounds like something that would only happen in professional wrestling. Surely this was just another one of Sonnen’s acts, to be accompanied by blusterous pronouncements and demands spoken directly into the camera: the born myth-maker and storyteller demanding the world recognize and reward his newfound objectivity. Instead, Sonnen tapped into that part of himself—the decent, modest, reserved part—that seems like the real Chael Sonnen (the one who so gently and modestly guided a team of young hopefuls through the most recent season of The Ultimate Fighter), but at this point who can say? Sonnen the Decent might be another mask, like Sonnen the Braggart and Sonnen the Brazil-Baiter.

When Helwani asked if he thought he’d actually get to referee the Silva/Weidman fight, Sonnen answered soberly, as if it were the most natural thing in the world—possible if not probable. “To get the main event? No,” he said. “It’ll be tough unless I can work a show or two before then in Nevada, and I don’t actually know what the schedule is there. But to referee? Yeah, of course.” No bluster or bragging, just the simple recognition of bureaucratic reality and his place in the pecking order: two things Sonnen has never concerned himself with in the past.

Things got stranger. The man who many believe talked his way into a fight with Jon Jones earlier this year then told Helwani that he wouldn’t be making any efforts to influence Nevada State Athletic Commissioner Keith Kizer’s decision. “I don’t want to make a pitch to him,” he said. No pitch?!! Chael?? “He makes expert opinions; he knows exactly what he’s doing. And there are great refs out there. … I want to ref it. I’m sure every other ref does too, but I’m putting my name in.” It’s moments like these, more so than the moments when he’s ranting and raving and rhyming, that I am most fascinated by Sonnen—the moments when he’s acting like one of us. How strange it is to be most mystified by a perfomer when he's acting the least like one.

There are times when I think that I’d like to meet Sonnen and be able to say for sure what he’s actually like, stripped of microphones and away from cameras. Then I think that finding that out would suck away all the mystery and confusion Sonnen has built around himself. Which would make him just another person. And the world is full enough of those for me. In our age of transparency I’d prefer not to know and to continue believing that in his heart, Sonnen’s desire to be a self-described “unbiased” MMA journalist and referee is yet another act in the absurdist play that is his public life. At this point, not even James Franco can match Sonnen when it comes to the post-modern art of turning your life into a performance.

The Benefits of Being a Big Mouth