Chaiya and the Art of Muay Thai 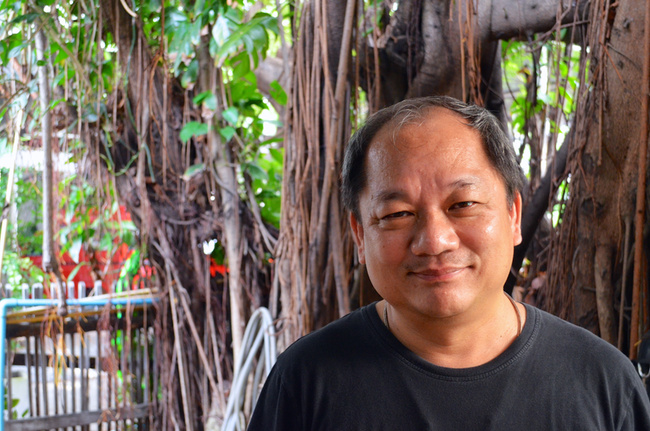 The image of a wise old martial arts master, patiently imparting his wisdom in a calm, respectful manner to worthy students who seek him out in his modest dwellings, is a fantasy common to the Western mindset, or at least to my personal childhood mindset. It hasn't really matched my reality the past few years training in Thailand, though, where wise old masters are replaced with friendly and/or aloof and/or hard-drinking and/or I-couldn't-give-a-shit pad holders, and fellow devoted students are replaced with foreign fighters on holiday training-binges or Thai boys and their teenage antics.

On the mats of Baan Chang Thai, however, my fantasy of learning from an old Muay Thai master in a tranquil gym shaded by a small grove of trees looks like it's coming true. Kru Lek, a fine artist and experienced teacher of Muay Thai Chaiya, a predecessor of modern Muay Thai, stands before us and extols the virtues of his chosen martial art. Through his interpreter, he tells us that Muay Thai Chaiya is the real martial art of Muay Thai, different from the sport version performed in the ring today. "If you don't punch or kick in the first round of a ring match," he says, "you're disqualified. But that's sport-fighting. In the real martial art, it's not like that; you don't have to attack first. That's what we teach here." 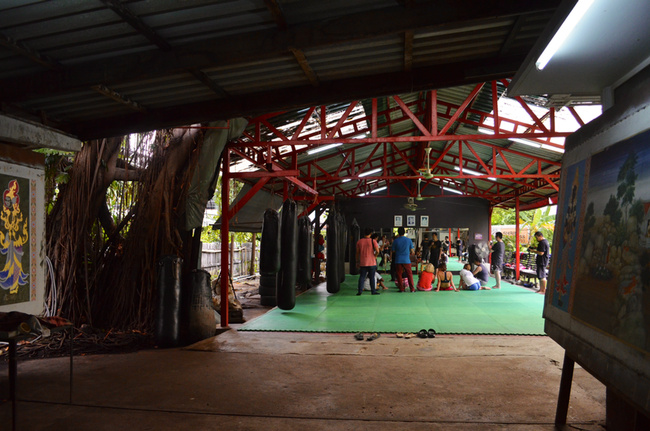 Originally established as a fine arts school, Baan Chang Thai, or "House of Thai Artisans," now seeks to preserve and teach classical Thai martial arts. My seven colleagues and I, all sponsored by the Tourism Authority of Thailand in an effort to drum up tourism based on Thailand's appeal as a health, fitness, and martial arts destination, jot down notes as Kru Lek speaks.

"One of Muay Thai Chaiya's major strengths is its solid defense system," Kru Lek says. To illustrate, Kru Lek and his long-term student and interpreter, a Thai-American named Mark, take turns attacking and countering. "Here you can see how arms and legs are weapons," Mark says, holding up an elbow to block Kru Lek's punch. "Yes, they are weapons, but they also have nerves so they can get hurt. In Muay Thai Chaiya, we try to position our arms and legs so that the attacker would hurt themselves on your defense, say, your knee or elbow.

"Think of a Chaiya fighter like a durian with its spikes," Mark continues. "As a Chaiya fighter, your defense is part of your attack. Attacking a Chaiya boxer is like trying to grab a durian—you can't do it well because the defense hurts you. In Chaiya, if you position your arm or leg a certain way, even just a slight movement that uses minimal effort, you have a great block." 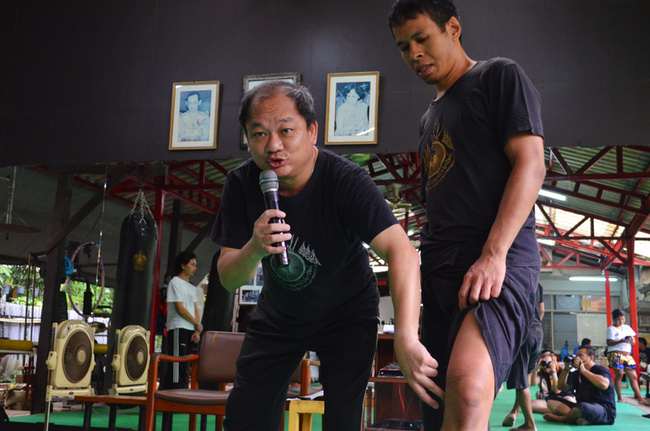 Our teachers lead our class of eight in some basic Chaiya footwork. We line up facing the mirror, mimicking Kru Lek's demonstrations. Even the simplest moves take more coordination than you'd think—the footwork and the movements feel foreign, markedly different from your standard ring Muay Thai techniques.

"Don't get discouraged!" Mark says as we fumble. "Kru Lek told me he practiced just his footwork three whole months because his teacher wanted to test his patience and dedication!"

After stumbling through the basics, we are treated to demonstrations of real-world self-defense techniques, including ground work, which I've never really seen addressed in a Muay Thai gym before. Kru Lek calls up one of our bloggers, Katya from Russia, and proceeds to demonstrate how one could ward off an attack with simple strikes. "If you're on your back and someone's attacking you from atop," Kru Lek says, "put your hands together in front of your face, make a Y-shape, pretend you're crying, and then hit him in the face!" 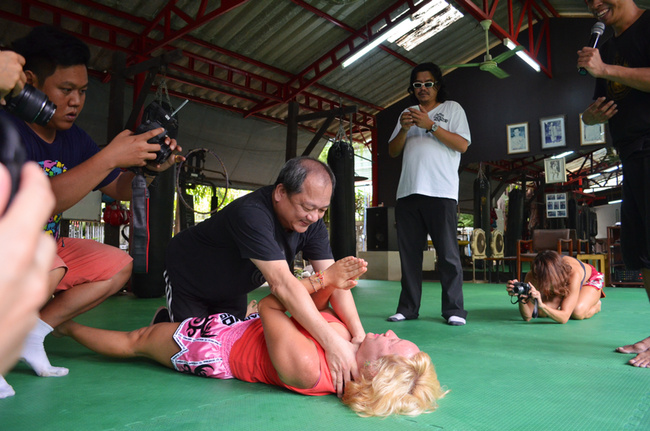 One of the bloggers, Alexandra from Slovakia, asks if Mark or Kru Lek have ever had to use Chaiya in a real-world situation. Mark says no, the only fighting he's done has been in the ring when he was younger. Kru Lek, on the other hand, has relied on Chaiya a number of times. Through Mark he tells us the story of fighting off a group of neighborhood thugs who attacked him on a bus when he was a teenager.

The attack, which Kru Lek successfully deflected, happened just over 40 years ago, shortly after he began learning basic Muay Thai Chaiya from his older brother. A few years after that incident, Kru Lek stumbled upon an article about a Chaiya master, whom he later managed to track down. After a bit of persuasion, the master agreed to accept Kru Lek as a student.

During his young adulthood, Kru Lek studied fine arts at university, later becoming a fine arts instructor in Bangkok. He continued to practice Muay Thai Chaiya on his own, but it wasn't until one of his paintings was featured on Thai TV that he began teaching Chaiya. The TV program, which profiled his painting of two Thai boxers, introduced local viewers to Kru Lek and his background in Muay Thai Chaiya. Word spread around the community and eventually his Chaiya students outnumbered his fine arts students. Kru Lek estimates that in the nearly 20 years his school has been open, he and his team have taught over 1,000 students from 50 different countries. 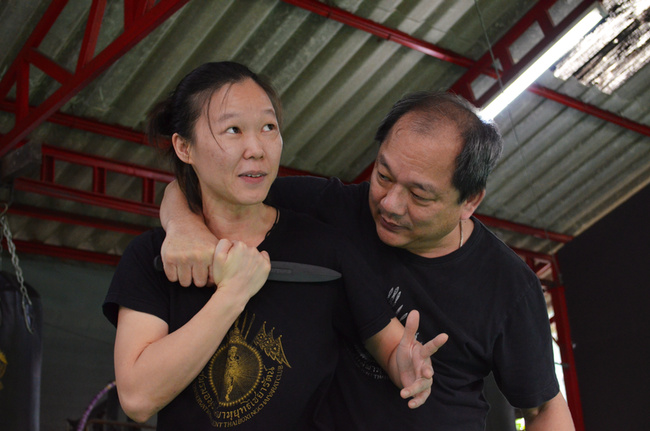 "We have students who go off and fight on their own after they train with us," Mark says, "but this is not considered a training camp. This is a school where we teach the art of Muay Thai Chaiya, not stadium fighting. We don't use all the Chaiya techniques in the ring because they're not meant for the sport. We don't want to break anyone's arm in competition.

"Muay Thai Chaiya and modern ring Muay Thai are very different in a lot of ways," Mark continues. "I used to be a ring fighter, but I wanted something more. All you did was striking, and the technique seemed minimal. There wasn't much footwork or ways to deal with certain things. When I found Chaiya, though, it felt complete. There was so much technique, and I knew I wanted to learn this style from the very first class.

"I think the problem, though, is that most people are not patient enough to devote the necessary time to learning this art. A lot of fighters could really benefit from learning the defense that's part of Chaiya, but most can't or won't put in the time to get to the level where it comes naturally in the ring. You have to have the right mindset, but I guarantee you, if you're patient enough to study this art, your ring fighting will become top-notch."

"I've heard the term Muay Boran before," another blogger says, "but I've never heard of Muay Thai Chaiya. Are they the same?"

Mark fields this question, tells us that Muay Boran is a misleading term. "Boran means 'ancient,' which suggests it's an obsolete art. The way I've seen Muay Boran taught these days, it's taught in a mixture, like some ring Muay Thai mixed with some old techniques. Muay Thai Chaiya is an old style, like Muay Korat or Muay Lopburi, but Chaiya is a pure style, a complete system, unlike what's known as Muay Boran.

"That's why we call it Muay Thai Chaiya, not just Muay Chaiya, because this is Muay Thai. It's Muay Thai in its original, complete, martial arts form, not the sport that most people think of today." 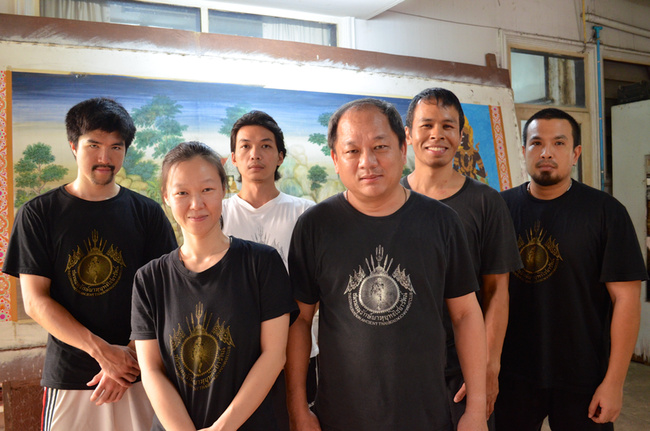 When I ask Mark why Chaiya isn't more popular, why it's relatively unknown outside of a small circle of purists and dedicated martial artists, his answer repeats a theme common when discussing Muay Thai's modern form: the money aspect. "It goes back to gambling and what makes money. Chaiya isn't popular because there aren't any Chaiya tournaments. There would be no real, true Chaiya competitions because people's arms and legs would be broken, or they'd be dead. Thus, gamblers don't bet on it, promoters don't make money off it. Instead, you have all these assembly-line gyms cranking out stadium fighters like they're the McDonalds of martial arts."

The focus on sport Muay Thai at the expense of the pure martial art of Chaiya appears inevitable in Thailand's current social and economic culture. Often from poor backgrounds, most modern Muay Thai fighters in Thailand don't have the luxury of devoting hours a day to a sport or skill that won't earn them a living. If the sport is what's paying their bills, the sport is what they'll practice.

This, according to Mark, is to the detriment of Muay Thai's cultural history. "Most fighters don't take the time to learn something deeper because they're so focused on winning prize money and title belts. Fighters start learning sport Muay Thai at a young age, but they don't start young when learning Chaiya. We do have some kid students at this school, but very few are dedicated. It would be great if we could start more of them young, preserving the heritage."

Mark mentions the idea of opening his own school someday, says he thinks Chaiya will attract a new group of devotees as more people discover it. In the meantime, though, he's still training under Kru Lek and teaching some of Baan Chang Thai's novice students. "A lot of the old masters have died off," he says, "and in too many cases their knowledge has died with them. I don't want to see that happen to Muay Thai Chaiya. There is so much of Thailand and Thai culture in this art. Just the names of the techniques themselves are beautiful, like 'Crocodile swings its tail,' 'Prince Rama walks in the forest,' 'Hanuman presents the ring.' So much of our history is preserved in this martial art, and I want to help bring it to the next generation."

The Ghost World of Muay Thai