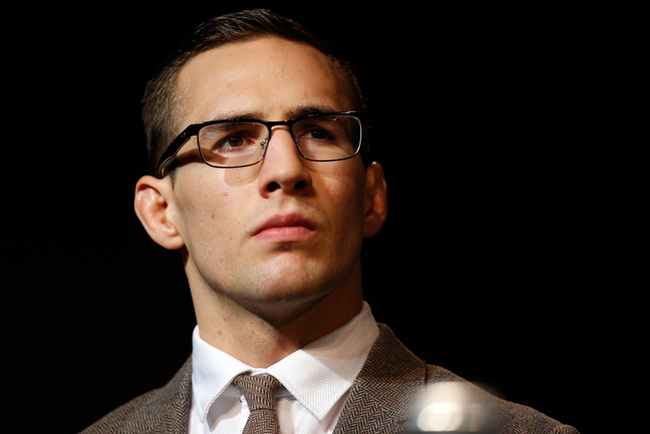 The last time Rory MacDonald won a fight under the UFC banner, he also took home Performance of the Night honors, after a noble and formidable showcase versus the Belgian Tarec Saffiedine. He was promised a title shot, which quickly became buried in the matchmaking methodology of the UFC. Thankfully, he has it yet again.

The last time Robbie Lawler fought under the UFC banner, he nailed shut the gaping yaps of anyone who ever casted an ounce of doubt about his ability to come up to the very top of the UFC game. After beating Johny Hendricks in the second episode of what was almost a trilogy between both welterweights, Robbie Lawler finally had the title belt wrapped around his waist.

Now, MacDonald and Lawler face each other for the championship at UFC 189, at the MGM Grand Garden Arena in Las Vegas on July 11th—the same night Brazilian featherweight champ José Aldo will determine whether or not Conor McGregor truly is who he says he is. Rory is Robbie’s first challenger.

It’s strange for a champion to come into his first title defense as the underdog, even stranger if against a challenger whom he has already defeated. But that’s exactly where we find ourselves going into UFC 189. Betting lines for the contest opened this weekend at a couple of online betting houses, and both are deeming MacDonald as the favorite.

If you forgot Lawler was victorious in a split decision at UFC 167, in November of 2013, on the fight that preceded his first fight versus Hendricks, which he lost, for the vacant welterweight title. Robbie would go on to win the following three fights, including his second face-off with Hendricks, who fights this weekend in Dallas at UFC 185. On the other hand, 25-year-old Rory would go on to win the next three fights following his split decision loss to Lawler.

Surely these numbers will dramatically change over the course of the next months. After all, the fight isn't until July, and so much can happen between now and then to alter the minds and guts of betting specialists. But maybe this just means that deep down the world knows that Rory MacDonald is truly the chosen welterweight king.

To the fans, who do you think has this fight locked down?

Feel The Fight: Fightland Sits down with Robbie Lawler