Check Out the Only Known Fight Footage of Charles Bronson 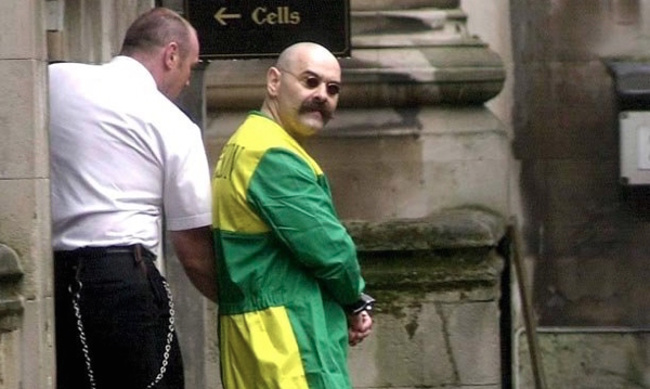 Charles Salvador, born Michael Gordon Peterson, aka Charles Bronson and Charles Ali Ahmed, is probably best known as “The Most Violent Prisoner in Britain,” an honorary title attached to his name hundreds of times by the British press during the 40 years he’s spent in prison since knocking over a post office in 1974. During that time Salvador, now 62 years old, has attacked more than 20 guards and dozens of his fellow prisoners, taken 11 hostages, caused hundreds of thousands of dollars in damage to prisons and hospitals, spent decades in solitary confinement, and initiated numerous one-man protests and hunger strikes. He was even the subject of a movie starring Tom Hardy. But not even an absurdist phantasmagoria of cinematic violence like Bronson can begin to capture the wild fame-hungry rage of the man himself.

Considering his record and his reputation it’s hard to believe that in 1987 Peterson was actually released from prison and allowed to roam the streets of England. During those brief 69 days of freedom Peterson lived true to form: robbing a jewelry store, fighting (and reportedly killing) a Rottweiler on a bet, and embarking on a career as an underground bareknuckle boxer, this on the advice of infamous London mobster Reggie Kray (one of the last of the Famous International Playboys). It was Peterson’s fight promoter, Paul Edmonds, who convinced the former convict to change his name to Charles Bronson, despite the fact that Peterson claimed never to have seen any of the actor’s movies.

Up to this point Bronson’s illegal boxing matches have been merely the stuff of legend, and morbid curiosity-seekers and fight fans could only speculate about what Britain’s Most Notorious Prisoner looked like in the ring. But earlier this week the Web site LadBible finally released the only known footage of Bronson’s fights, a few seconds of action that give the world a small glimpse inside the maelstrom of violence that has plagued the British penal system for nearly half a century.

Considering Bronson’s laundry list of assaults over the years, involving glass jugs, jam jars, poison, silk ties, metal trays, knives, sauce bottles, and most parts of his own body—not to mention his numerous descents into madness and long stretches in solitary confinement—one would be safe in assuming that Bronson boxed like a maniac: all brute strength and no form, all anger and no finesse, pure blitz and rage, no poetry at all to his violence. And it’s true, at the 2:35 mark of the video below, you’ll find the kind of chaotic Tasmanian devil frenzy you might expect from a psychopath who’s been in jail for more than a decade, winging wild hook punches at his opponent in a blind whirl. But keep watching and you’ll see another Bronson—perhaps the same Bronson who turned to visual art in 1994 while in solitary confinement; whose paintings have been displayed in London tube stations; who developed and published a fitness regimen for workout junkies who, like himself, are short on space and low on resources; who’s won 11 Koestler Trust awards for his art and poetry and published 11 books. That’s the Bronson (or maybe the Peterson or the Salvador) you see at the 2:42 mark, subtly parrying his opponent’s jab and coming over the top with a knockout right counter of his own. A picture-perfect “delayed counter,” as our own Jack Slack would describe it, the work of a psychopath with more than just the touch of the artist about him. A brute with the soul of a sweet scientist.

I Fought an Inmate in a High-Security Thai Prison