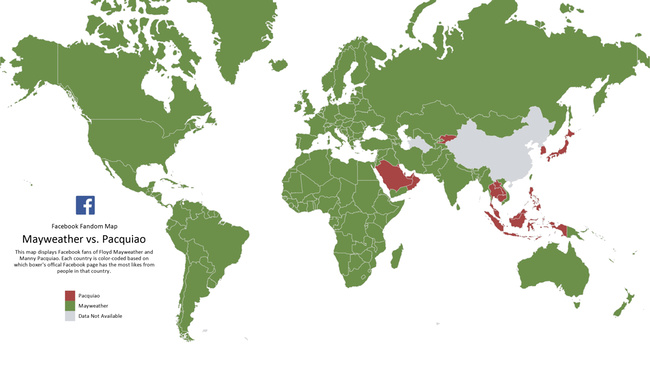 This week, Facebook hopped on the Mayweather versus Pacquiao hype train and they did it with a little bit of swag. On Wednesday, the world’s social network of choice revealed a series of maps showing which of either boxer its users were backing up. To make these little heat maps of sorts, to see who a user will support, the network used the number of likes in Mayweather and Pacquiao’s official Facebook pages. Facebook counts on a billion and a half users.

The first map shows you which boxer got the most love around the world. Money’s got the lead over Pac-Man in this race. It makes sense: Money’s an ostentatious dude, he didn’t get that nickname out of nowhere. He flashes a lot, he’s got the steez that get people on board with him, he’s a showman, you know. He’s a rock star, while Pac-Man is a humbler, more low-key character, and that’s just as rad. As such, Money reaches 9.6 million people in likes via Facebook, while the Filipino “Nation’s Fist” counts 6.7 million likes. Virtually throughout the entire world Money has the lead in terms of likes. He loses the race in some countries, however: Japan, the Middle East, and obviously the Philippines belong to Pacquiao—at least in terms of likes. Interestingly, the Philippines are in the top five countries with most likes for Mayweather. 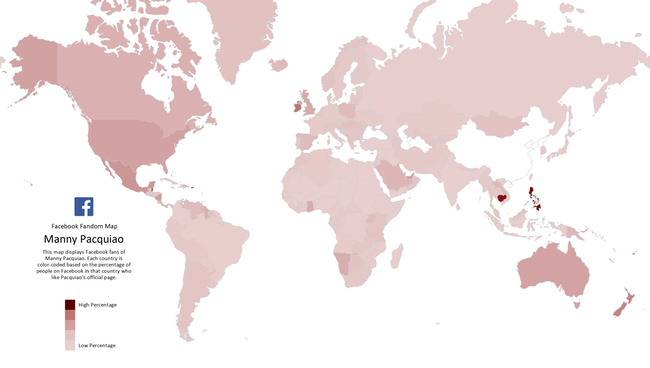 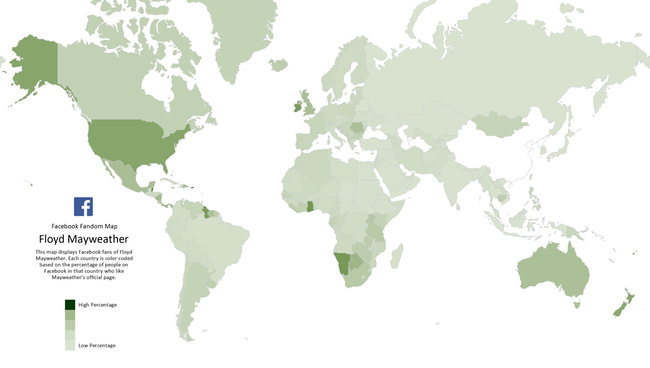 The second and third maps show you in which countries either boxer has the most fans. Even though Mayweather takes the United States for himself, Pac-Man still has a ton of American fans. In Mexico—a nation entranced by the sport—he’s beloved. In the United Kingdom and Australia he’s beloved. He’s got more fans in Argentina than in Brazil, and his top five countries are his homeland, the United States of America, Mexico, Canada and the UK.

Mayweather’s top five fandoms are the US, Mexico, the UK, the Philippines and Australia.

These guys are slated to take each other in a historic boxing bout around 11 PM Eastern Time at the MGM Grand Garden Arena.