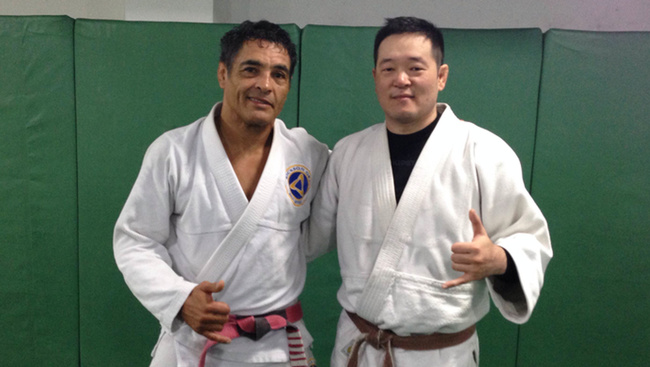 Saturday’s UFC Fight Night in Macao features a half dozen of China’s best MMA fighters. But these guys are just one small step removed from the very first four Chinese to ever train and compete in mixed martial arts. Those four, Zhang Tiequan, Ao Hailin, Dai Shuanghai and He Peng, weren’t even the best Sanda fighters of their generation.

But when Chinese-American Andy Pi went looking for Chinese MMA fighters for a promotion he was putting together, these were the guys the sports universities would release to try out mixed martial arts. Zhang Tiequan eventually made it to the UFC, losing all three of his bouts before being released, whereupon he joined Ao Hailin and Dai Shuanghai and helped train and mentor the next small group of Chinese MMA fighters, the six guys fighting on the Macao card.

The Chinese MMA circle is still very tiny, and the origins of the sport can actually be traced back to one man, a Chinese-American named Andy Pi. 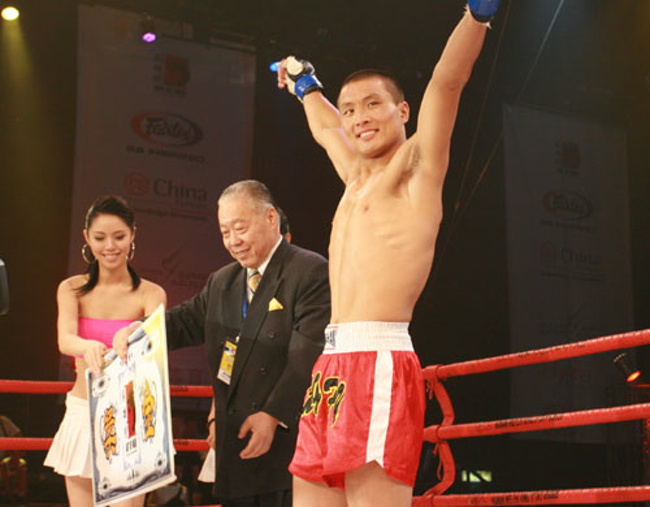 Andy Pi has trained every single prominent Chinese mixed martial artist in Brazilian jiu jitsu. He co-founded the first MMA promotion in China with his brother Konrad, organized financing for it, jumped bureaucratic hurdles, trained and cornered fighters, and competed himself for a while. He currently lives in Beijing with his wife, three children, and runs China’s oldest BJJ gym, the Beijing Jiujitsu Academy. But ten years ago he was a trailblazer, flying from Beijing to Dubai to Manila promoting MMA in China.

Andy arrived in Beijing in 1997 at the age 24. His entire family lived in Beijing, and they urged Andy to consider leaving Fremont, California behind to seek out his fortune in China. A brief visit turned into a commitment, and by 1998 Andy Pi had picked up and moved to Beijing. With nothing much to do at first, and few friends, Andy started a Brazilian jiu jitsu class out of his home.

“I’d been training for three years at the Royce Gracie Academy in Torrance, and I just fell in love with it,” said Mr. Pi. “For me, as a smaller guy, I found BJJ to be perfect, a perfect self-defense system. So when I got to Beijing, I stayed at it. I taught a few of my friends, and I taught them everything I knew because I wanted real training partners, not just someone to throw around.” 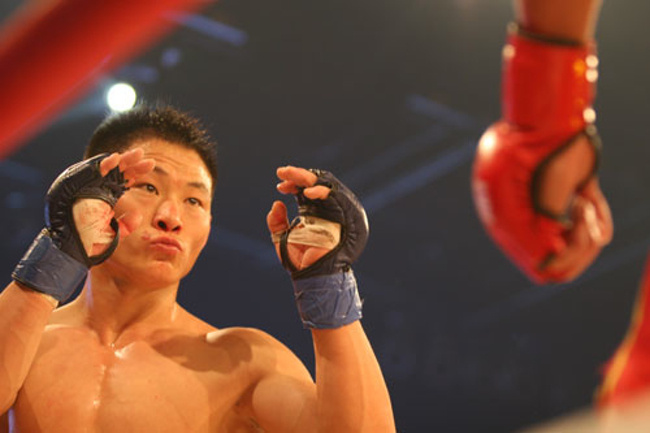 A young Ning Guangyou, who fights on Saturday's Macao card.

By 1999, Andy had gained a small following through word of mouth, and advertisements in the classified sections of expat magazines. He was on a business trip to Guangzhou when he met a Brazilian-Arab (whose name Andy won’t divulge) with ties to the United Arab Emirates. Andy had put an ad in the paper for anyone who wanted to train BJJ, and although the paper printed Andy’s email wrong, the Brazilian somehow sent an email to the correct address.

“It was truly maktoob,” Andy says, using the Arabic phrase, “it was written,” meaning it was destiny.

The two became good friends, eventually doing business together selling cordyceps worms to the U.A.E. That same year, Andy took a group of Chinese judo practitioners to the Abu Dhabi Combat Championships, the submission wrestling competition that has since become one of the most popular events in the world. The Chinese lost every match, but it was Andy’s first taste of international competition, and the beginning of what would eventually be a fruitful relationship with the influential and powerful U.A.E. MMA community. 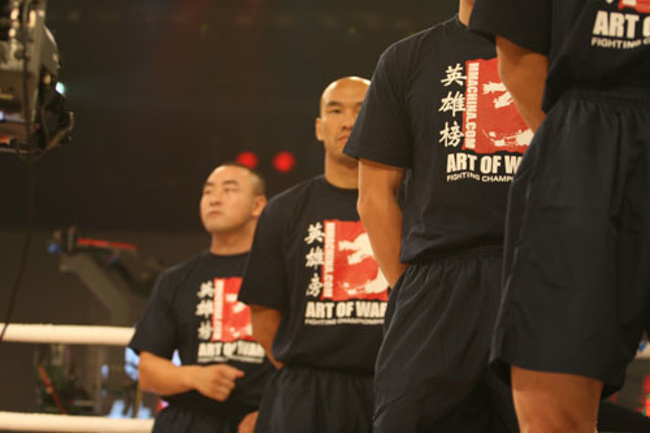 Bao Li Gao in the back, Zhang Tie Quan in the front.

Andy returned to Beijing and kept teaching BJJ. By then the martial arts community in China had grown somewhat larger, and gyms were staging informal competitions with each other. In one of those competitions, Andy had his arm broken by a kick. Although he still managed to submit his opponent via arm-bar, the experience shocked him, and set the stage for China’s first MMA promotion, the Art of War.

“I couldn’t believe that we didn’t have any doctors at the event,” said Andy. “And it got me thinking, MMA is only getting bigger here, and if we don’t get organized and do this proper, someone is going to get hurt. And that is the last thing I wanted.”

“It took years for the American public to accept mixed martial arts, and stop referring to it as a bloodsport or whatever, and here in China, an even more conservative country, any real injury or worse would kill the sport forever.” 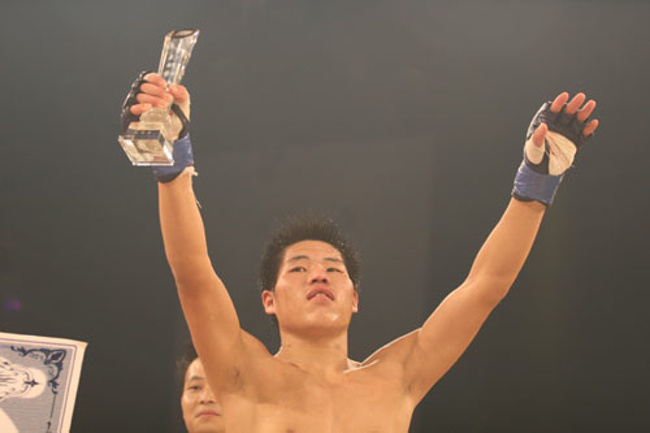 Andy put together a business plan, and with help from his family, friends and investors in the US and the U.A.E, the Art of War was born. The first event was in October of 2005, and featured the original four Chinese mixed martial artists: Zhang Tiequan, who later fought in the UFC, Ao Hailin, Dai Shuanghai, and He Peng. Later that year, Andy accompanied the four of them to compete in the Universal Reality Combat Championship (URCC), based out of Manila. Although all four were accomplished Sanda fighters and wrestlers, none of them had any substantial MMA experience, and they had been learning Brazilian jiu jitsu with Andy for three months. Nevertheless, they won all four of their bouts in Manila’s famed Araneta Coliseum that night.

“It was an incredible feeling, especially after He Peng knocked out Mark Sangiao in the last fight,” Andy said. “Mark is a great fighter, and after all of the Chinese won the previous fights, everyone thought Mark would beat He Peng. But when He Peng scored that round house knockout, the whole place went silent. The only people cheering were the corner guys and me.”

“I knew we were making history.”

The Art of War went on to stage 15 events in China, featuring a who’s who of Chinese MMA fighters, including Li Jingliang, who defeated David Michaud at UFC 173 as well as Ning Guangyou, Yang Jianping, Zhang Lipeng, and Wang Sai—all of whom are competing in Macao on the 23rd of August. The fighters lived together in one dorm on and off for two years. Ning Guangyou, Zhang Lipeng and Wang Sai still train together often. Bellator’s Vaughn Anderson was also fighting in the Art of War at this point, and lived in the dorm with them. 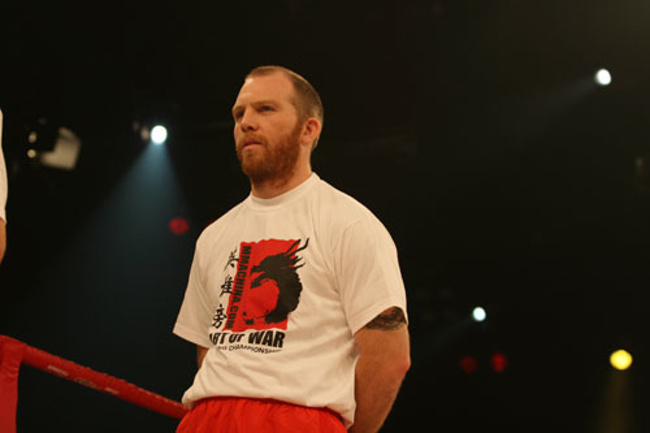 “Art of War had come through Taiwan looking for guys, and at the time I was just sitting on my couch eating Doritos,” said Vaughn. “I went up and fought Ao Hailin and got my ass kicked. That pretty much jump started my fight career. I changed my eating and training habits, and then lived with these guys for a year training and and fighting almost every day.”

The promotion finally closed up shop in 2010 after a proposed collaboration with the UFC fell through. The royal family in Abu Dubai, who backed the Art of War, are also invested in the UFC—in 2010, Sheikh Tahnoon Bin Zayed Al Nahyan bought a 10% stake in Zuffa, Ltd, which owns the UFC—and there was pressure for the Art of War and the UFC to work together in China. Instead, the UFC decided to go it alone, and has since been relegated to a head office in Singapore and events in Macao only, instead of Mainland China.

“It’s unfortunate that the Art of War closed down, I put my life into that business,” said Andy Pi. “But I know that we put MMA on the map in China, and if it weren’t for us, there would be nothing out here today.”

This weekend in Macao, though, almost the full Chinese contingent will be veterans of the Art of War.