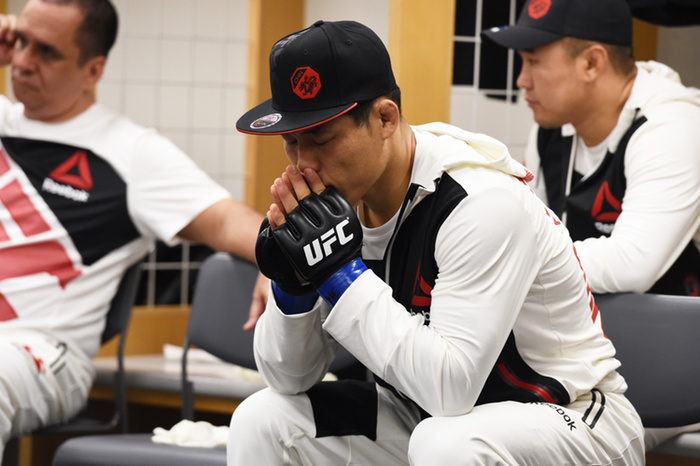 Chinese MMA took a heavy blow when Li "The Leech" Jingliang face-planted into the mat on September 27th in Tokyo, Japan. He had been dominating the fight up until that moment. Keita Nakamura was supposed to lose; he was an underdog coming in on short notice after years slaying the minor league Asian circuit in promotions like Deep, Shooto, Legend FC and others (winning 9 of his last 11 fights), a veteran on his way out, a good test.

But like a vet Nakamura endured a beating in the second and third rounds, saw an opening when Li rested for a bit, and dipped to the back like a serpent, locking in the choke for a highlight reel submission. Great win for Japan, bitter defeat for China. Li, 27, is now 2-2 in the UFC, including a tight split decision loss against Nordine Taleb back in October 2014. If it weren't for the yawning maw of the Chinese market, he would probably be expecting a pink slip any day now. Zhang Lipeng was cut earlier in the year and Ning Guangyou, although victorious so far, is 37 years old and has a few fights left, if that. Making the UFC was a crowning achievement for Guangyou, and if he can play out his contract with wins, all the better. But is he the one to carry the Red Flag into the international MMA circuit? Most likely not.

At this point, the hopes fall to the generation coming up. The problem here is the disconnect between the regional promotions who feature Chinese fighters and the international promotions that offer the exposure needed for the sport to grow and attract more athletes. The two major promotions active in Mainland China are Kunlun and ONE. Neither are content to be the Asian-version of the Resurrection Fighting Alliance (RFA) and provide a path from gym to amateur to semi-pro to the big leagues. Not only that, but there is enough money to be made working with Kunlun and ONE that Chinese fighters may not see a good reason to make the jump to the UFC.

A UFC contract offers exposure, but the standard for a three-fight contract is around USD 30k, which is nothing when you consider the travel, health, and training costs that go into preparing a Chinese fighter for Fight Night in Japan, for example. It just doesn't make sense. Athletes in China can take advantage of a domestic system that pays them a wage and promotions like Kunlun that are prepared to shell out 30k per fight for the better fighters. For the elite, especially in Kunlun and other Chinese-operated promotions, there are real fortunes to be made.

Naturally the downside of that system is the shafting the lower-level competitors receive— low or late pay, switching opponents at the last second, unenforceable contracts and other nonsense—but it's a familiar system, a system that keeps its word, shady as it might be, when it comes to the opportunity to make real money.

The UFC offers none of that to a Chinese fighter with a limited ability to smack talk and create hype. The UFC is about glory for a lot of fighters, about competing against the best and proving oneself. That resonates only slightly among Chinese martial artists who must make a living first, seek glory second.

The first to succumb to the call of the UFC was Zhang Tiequan  (back in 2011), and after him came a clutch of prospects (Zhang Lipeng, Jumabieke Tuerxun, Wang Sai, Ning Guangyou, Yao Zhikui and Li Jingliang) who have pushed the envelope a bit further. The UFC has already cut three of the six and the Leech, despite his great potential and heartbreaking losses, faces the same fate right now. Yao Zhikui and Ning Guangyou are still alive and both will be fighting on November 28th in Seoul for UFC Fight Night.

Yao is just 24 and should be 2-0 in the UFC—a lot of people thought he beat Royston Wee in Macao in August of 2014. He can improve his record to 2-1 with a win over Freddy Serrano in Korea and help keep the flame alive for the Chinese mixed martial arts community.

The Leech's loss hurt, especially because it looked like he had it in the bag until the RNC put him to sleep, but if Guangyou and Yao can pull off wins next month in Korea, then the China MMA Dream stays alive, if just barely.