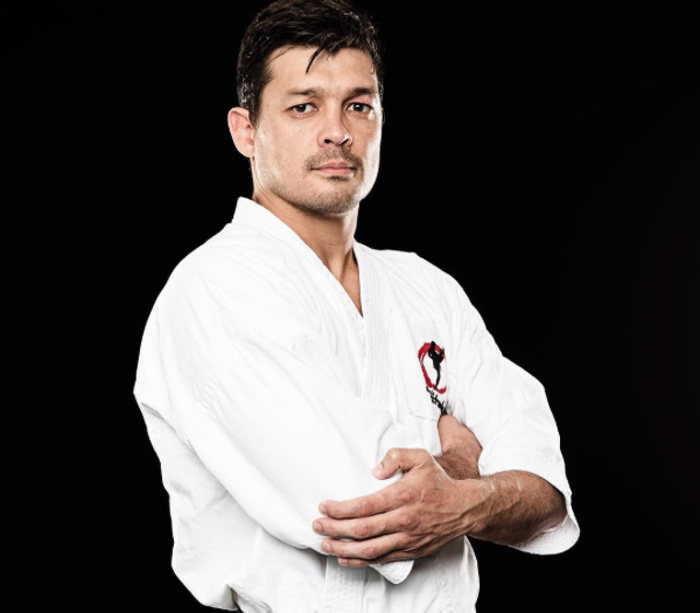 This weekend might seem like one of the slower ones in the fight game, with no UFC event to talk about, but between Bellator and Glory it promises to be a decent few days of scraps. Certainly there are three men competing this weekend who I have my eye on not because I expect an easy win, but rather because even in a loss you will always see something peculiar from them. The Style Bender, Israel Adesanya, challenges for the Glory middleweight title this weekend, with his flamboyant array of kicks, stance switches, and his neat feet. Robin van Roosmalen defends his Glory featherweight title with his flat nosed infighting, built on blistering combinations into low kicks. And finally, Chinzo Machida fights in Bellator with his even more karate-like style than his famous karateka brother and former UFC champion, Lyoto.

If you are expecting a lot from Chinzo Machida's career, it might be time to dial it back. The Brazilian karateka is just six fights into his professional mixed martial arts career but he is already 39 years into his life. The likelihood that Machida has some kind of title run or lengthy highlight reel of knockouts in him for the years to come is extremely poor. However, that doesn’t mean that Chinzo Machida is not worth your time. The more successful karateka in pure Shotokan point fighting competition, Chinzo's style shares many traits with his younger brother's, but differs in some key ways.

Both Machida boys will fight out of both stances, at long range, picking their shots and using the distance as a barrier through which they can identify their opponent's lunges and counter them with strong straight punches. The old gyaku-zuki or 'reverse punch', coming from down by the chest and being thrown with a step of the lead foot—just a straight, but one interesting form of it.

Lyoto Machida prefers to fight out of the southpaw stance for the majority of his time in the cage, and this means that he can check or parry the lead hand, step to the outside of the lead foot, or lean his head out the window to place himself away from his opponent's other hand.

Chinzo Machida fights orthodox more often than not, and this means that he often uses his lead hand to parry or trap the opponent's lead hand and throws his right hand inside it. The danger of this is that his head is still in the line of fire of the opponent's rear hand. It isn't impossible to do, in fact the inside parry counter was a staple of Conor McGregor's counterpunching against Nate Diaz in their second bout, it's just an important consideration and a change in dynamic.

The purpose of Chinzo's lead hand movement can be better seen here due to the exaggerated distance. He is dragging his opponent's lead hand out of position to clear a path for his right straight.

And here we see the ever-present danger of the right hand after Chinzo has occupied both hands on one side of his opponent's centerline. But Chinzo gets his left arm and shoulder up to bar the shot.

Lyoto Machida's southpaw stance allows him to play quickdraw with his lead leg round kick. Any moment of weakness or a flinch which brings his opponent's rear elbow out of position and Lyoto's long left kick is thrown into it with rib splintering force. In one of his several victories without taking a notable strike, Machida stopped C.B. Dolloway with a single left kick under the elbow.

But Chinzo Machida, working from the orthodox stance, also likes to kick into the 'open side', using his left leg against orthodox opponents. Front snap kick and diagonal (or triangular) snap kicks to the midsection are Chinzo's forte. They are shorter, and they often go unnoticed by the viewer, but the ball of the foot digging into the midsection is never pleasant and they do their job.

And of course the danger of the high kick or the lead leg Brazilian kick is ever present.

Snap kicking with the lead leg straight out of the stance—without the Schilt/Kikuno style march—was a tactic used by the great JKA Shotokan competitor, Masahiko Tanaka. Tanaka went on to teach many of today's top instructors as he ran the legendary JKA's instructors course. Yoshizo Machida, a JKA instructor’s program graduate, would likely have trained with Tanaka extensively. Tanaka called these kicks cut kicks, but to do them out of the stance involves sneaking the back leg in underneath the fighter from out in the long, standard stance used for moving and the majority of striking in Shotokan style fighting. The danger of this is that it makes retreat a little more difficult. Here Chinzo falls over as his opponent steps in while Chinzo is sneaking up his rear leg to dig in the lead leg snap kick.

Like his elder brother, Machida is great at cutting angles when he needs to. Against the fence he will circle out beautifully, often engaging his opponent just to evade under their retaliation.

And like his brother he uses side steps to gracefully evade the bullrushes he doesn't feel confident enough to step in and counter.

And I'm sure you've seen these booty feints before. Both Machida's use their hips to feint kicks and attempt to capitalize on their opponent's flinches. For Chinzo the simple inside kick feint to legitimate outside low kick is money.

Finally, Chinzo Machida has the eye of someone who has been looking for openings against resisting opponents for the last twenty-five years of his life, and that's hard to replicate. Whether it was picking up on Mario Navarro's tendency to duck each time Chinzo showed a feint, and capitalizing with an uppercut—not really a competition karate weapon...

Or, after throwing dozens of right leg front kicks at the southpaw Brian Wood and being forced to fight off one leg when Wood caught it and dived for a single leg takedown, Chinzo decided a nice air-hiking knee would work a treat.

The one mark against Chinzo Machida is that he is doing this all too late. After making his MMA debut in 2005, fighting again in 2006, then waiting until 2010 to get his third fight in, it seemed as though Chinzo's interest in MMA was sporadic. After taking two years out following shoulder surgery, Machida managed—for him—an impressive three fights over the next four years: 2013, 2014 and 2016. On a three fight winning streak and now fighting for Bellator, it seems a waste to fault Machida for wasting his potential or not getting into MMA seriously soon enough. It's worth watching to see what he can do, rather than talking about all the things that he won't have time to do.