Chris Leben on Drugs, Jail, and His New Memoir 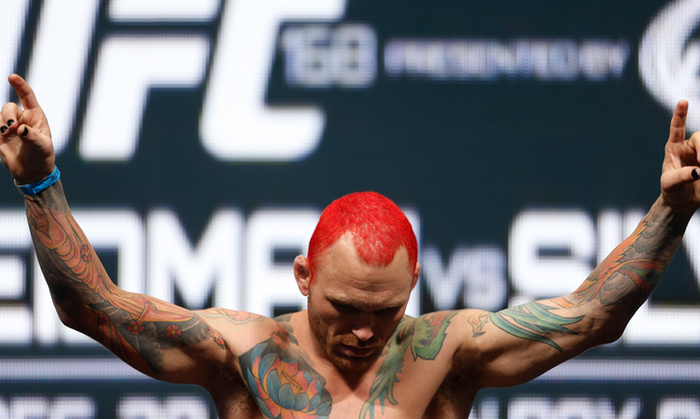 For close to a decade, for good or ill, Chris "The Crippler" Leben was a larger-than-life character in MMA. He was the wild man middleweight who helped turn the first season of The Ultimate Fighter into appointment viewing, out-brawled Wanderlei Silva in under 30 seconds, and once beat Aaron Simpson and Yoshihiro Akiyama in the span of two weeks. But success under the spotlight belied the personal problems that surfaced when no one was watching: facing some of the best fighters in the world while partying at a frightening pace, sampling from a buffet of vices that swelled into a 300-milligram-per-day Oxycontin addiction, and enduring stints in rehab and jail, the most recent of which saw him serving time this past autumn.

It's all there in The Crippler: Cage Fighting and My Life on the Edge, Leben's memoir due out January 5 from Skyhorse Publishing. Instead of whitewashing those personal failures into a hero's journey, Leben's book reads as a mix of war stories and regrets, an unvarnished look at the life behind a name that helped put MMA over to the reality-TV-watching public, and a confession. "A lot of times I'd think of myself as the good guy when I'm telling these stories," Leben says. "Then I started going back over what I was saying and I was like, 'Fuck, man. I'm an asshole.'"

Fightland spoke with Leben about digging up his past, his desire to fight again, and the horror show of kicking Suboxone.

Fightland: Straightaway in the book, you mention that you're basically functionally illiterate.
Chris Leben: When I graduated high school, I really had no reading and writing ability. I more or less learned how to read and write from Myspace, trying to get laid. I actually got a lot better in jail—I was reading nonstop in jail. My spelling is still atrocious.

During the process of working with your ghostwriter, Daniel Patinkin, what did you make of having to go back and revisit some of the tougher episodes from your life? Was it therapeutic? Was it miserable?
All of the above. Some parts make you laugh, other parts were stressful, other parts were things I never thought I'd hear myself saying again, and that triggers you to have to go deal with all that emotion again. They say it's good and sometimes it is, but other times it's like fuck, let sleeping dogs lie, you know? Sometimes it would make me be like, "Fuck. I've gotta walk down to the store and get a drink."

There were some things in the book that really took me by surprise, like reading about you smoking crack with a bum after you'd been on The Ultimate Fighter. Do you think your experience with substance abuse was unique among fighters?
Fighters are like strippers: they're not paying their way through college. What I mean by that is that there's something in the past that's driven them to do what they're doing. And I feel that's the same thing with fighters. Every fighter, even when they walk in the gym and they'll seem like the most clean-cut good guy, you're gonna find the skeletons down in there somewhere. There's something that makes you go, "I'm gonna risk getting my face smashed in front of all of my friends and family and throw possible future careers out the window. I'm gonna dedicate everything to doing this, and who knows what the ramifications are gonna be for me 10 years down the road." To take that risk, there's definitely some stuff going on inside that guy.

You were always portrayed as a hard-partying guy, but serious substance abuse was a factor throughout your career—you mention getting blackout drunk in Vegas a few days before your fight with Patrick Cote, and later on you talk about experiencing the symptoms of opiate withdrawal before fights. How did drinking and drugs become a part of your day-to-day life?
Drinking and drugs were always a part of my life—I was almost born into it. Until I got on The Ultimate Fighter, I didn’t realize there was anything different between me and other people. It was really Nate Quarry and The Ultimate Fighter that made me realize: fuck, normal people don’t do this shit. They're not drinking when they might be fighting in two days—they're eating healthy and everything else. So drinking and drugs never became a part of day-to-day life: they've always been part of my day-to-day life that I've continually struggled to make not a part of my day-to-day life.

The nice thing was if you pop a couple Percoset or Oxycontin, people don't notice—when you show up drunk to practice, that's frowned on, not to mention it's hard to lose weight when you're drinking because there are so many calories in alcohol. I'd be on the hardest, strictest diet in the world, then I'd fuck up and go fuckin' have six Long Islands. If I could just take a pill that took the edge off, that was obviously a better answer for me, not to mention it helped with injuries and the physical pain. It turned into a cure for the emotional pain as well. That's how that whole thing really spun out of control.

When I went to rehab after [fighting Mark] Munoz, I got out and went on Suboxone. Basically, it's rich man's methadone, and this is the stuff that doctors give you. It's like the most addictive substance in the world with the least number of people being able to get off of it out of any drug out there. It's got the highest relapse rate, this Suboxone shit…I was sober for like a year in Hawaii, I had a few beers for a couple weeks, then when I got to San Diego I was completely sober again—If you would have asked me I would have told you, "I'm 110 percent sober, I just take my medication from my doctor that I'm prescribed." Well, man, I tried to quit [Suboxone] twice. Once I ended up in the fuckin' psych ward and ended up fighting like 12 cops naked and shit. The next time I went crazy trying to quit too. The last time my life fell apart was because I was trying to cut my dosage down, I went crazy, and I started re-medicating with alcohol. But luckily, in jail you don’t have the option to relapse. I had over two months where I got a chance to kick this shit. They say Suboxone's not bad for you, they say it doesn’t get you high because it's a partial agonist, but it does something man, because I was sicker than fuckin' shit.

It was the worst thing I've ever had to go through in my life: they had to bring me to the ER a couple of times, I went into seizures on the cell floor and shit. For the first 10 days I was in jail, the shit that some of the people told me I was doing was incomprehensible to me—I don’t remember the first 10 days at all. The first month, I was sick. Bad. The second month I started working out a little bit. I gained a shit ton of weight because for the first month I didn’t get out of bed at all, but luckily that's been coming off— I've been hitting my diet and working out, and I'm down almost 20 pounds since I got out of jail. 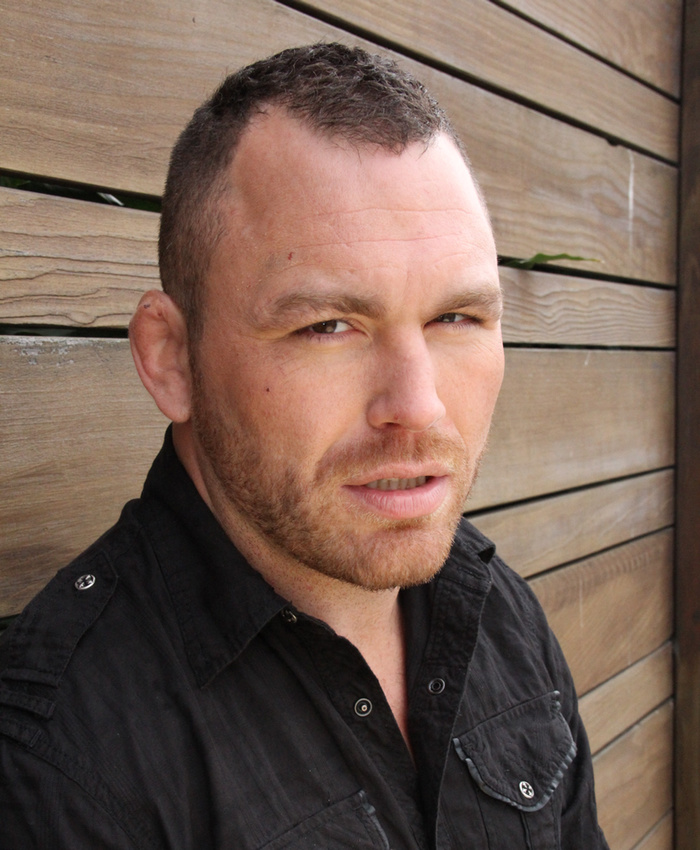 Opiates are the problem of the moment, across all social strata from the cities to the suburbs. Given your own experiences with addiction, do you have any thoughts regarding a solution that other people might not be thinking?
It's a horrible epidemic. I just spent a couple months in jail, and the most amazing thing is that probably 80 percent of the people in jail have drug problems. Most of them lost their jobs because they got thrown in jail, so they didn’t have money for drugs and they stole some shit, then got thrown back in jail. Then they get on probation and they get a probation violation for testing positive for drugs, then they get thrown back in jail and lose their job again. It's like this never-ending cycle. I think support and education is more the answer than policing. When you're a drug addict, the fear of going to jail or getting arrested isn't going to stop you.

Did fighting give you more than it took away, or was it the opposite?
There's a little of both. Even right now, I'm between jobs, trying to find a gym to coach at. It's a struggle to make a living and a retirement and a career out of this particular industry. That being said, I love the gym. I love training. If it wasn’t for those build-ups to fights and getting sober for a couple weeks, or at least cutting things way down before those fights, I'd very likely be dead, so it probably saved me in that aspect. As far as my career overall, there are great moments and there are also some shitty moments. The great moments are because I did things right and things worked out the way I planned. In my case, the bad things weren't because I did the right things and they didn’t work out: the bad moments were because I was fucking up outside the cage, generally speaking. That always leaves you with a coulda-woulda-shoulda feeling, you know?

It looks like you've been training pretty heavily since your most recent stint in jail. Are you happily retired or are you getting the itch to fight again?
I got an itch—I won't lie. Now that I'm out, fuck, I can't even drink because I've got this three-day alcohol test, I've got a probation officer, and I can get tested randomly at any time. I feel sharp as nails and quicker than ever. My cardio sucks, but I feel faster and quicker going with these 21-year-old kids now, training five hard five-minute rounds. I get through it, I feel good, and I like to get hit in the head again. I think that before, being slightly sedated, you want everybody to calm down—as a coach I was always telling my fighters, "Don't hit so hard, don't be knocking each other out." Now that I'm kind of back to the old Chris Leben, I'm definitely meaner, which is probably a good thing for our sport.

As a pure story, one of the best aspects of the book is that there's no big moment where everybody lives happily ever after. But as an empathetic reader who's talking to you now, I get sad seeing these familiar problems stay with you over such long spans of time.
I think you're right—that's a thread to the book and it's an important one, because as soon as I stop working on myself or trying to better myself, it all falls apart again. As soon as I think "I've got this licked, I've got it beat," it fuckin' falls apart again. For me, self-reflection and noticing when I'm wrong and promptly admitting it, and constantly monitoring who's in my life and what I'm doing with my life is something I need to be proactive on forever. As soon as I don’t do it, it all falls apart. The only happily ever after is when we die—until then, you're gonna have struggles. I feel like I'm halfway through a second book already with the struggles in my life since I got out of jail just over a month ago. It's been difficult, but you keep on keepin' on. You try to be better today than you were yesterday. That's all you can do.