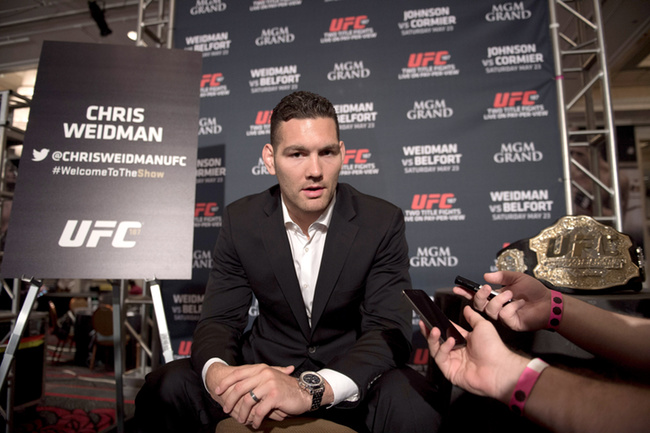 Less than a month away from July 11th’s UFC 189 super-event featuring the highly anticipated featherweight title dispute between Brazil’s José Aldo and Ireland’s Conor McGregor, it feels as if nothing else matters. Over the past few months, the heat level has risen, and at this point José Aldo is watering at the mouth to get into the Octagon with the Notorious.

The opinion of the hour belongs to Chris Weidman, who’s putting his money on a victory from McGregor. He’s not just calling McGregor’s win—he’s going as far as specifying that the Irish sensation will finish the Brazilian champ via technical knockout in the second round. Despite all that, Weidman calls himself a fan of Aldo.

In an interview given to FOX Sports, Weidman said he’s a “big fan of Aldo but I think McGregor’s winning the fight. I think McGregor finishes him, TKO. End of the second round…Trust me, I know the world’s going to end if he wins the fight. Everybody wants to see [McGregor] lose, besides the UFC. I think he’s just so big for the weight. Very athletic, big and confident. I think those are his biggest attributes.”

Beyond seeing in McGregor a supreme specimen, Weidman believes Aldo isn’t as focused as he ought to be heading into the fight that could tear him down from the summit he’s occupied for so many years. He told the interviewer, “I don’t know. This drug test thing. His coach is talking about retirement. Maybe [Aldo’s] head isn’t 100% into the game.”

The drug test thing he talks about is the botched sample collection that happened earlier this week, when an American NSAC tester showed up without the proper accreditation. Upon finding this out, Aldo destroyed the sample and Conor called him and Dedé Pederneiras, his coach, weasels. Aldo was tested again with no incident. Pederneiras also announced a few weeks ago that he would be retiring from coaching soon.

Aldo’s last fight was a phenomenal display of endurance, strength and resilience. After five battering rounds, he defeated Chad Mendes via unanimous decision. Weidman understands his power and status, yet he still thinks McGregor will triumph: “I feel like he showed a lot in [the fight versus Mendes], but for some reason I still think he loses this fight.”

Chris Weidman, the Fall of the Brazilian Old School, and Jacaré’s National Responsibility