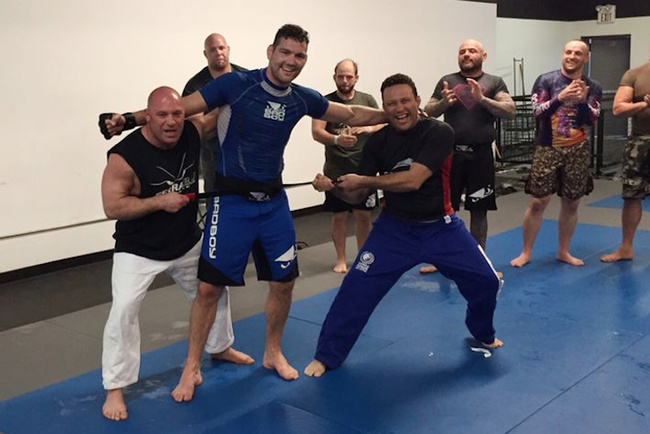 2009 saw the professional mixed martial arts debut of current middleweight champion of the world—the man who definitively dethroned Anderson Silva and cemented the latter stage of the Spider’s career—Chris Weidman. He got his first two wins in the local New Jersey circuit: the first by kimura and the second by technical knockout. That year, Weidman—a two-time All-American NCAA Division I wrestler—faced André Galvão in the quarter finals of the acclaimed grappling tournament, the Abu Dhabi Combat Club, still as a one-year novice in Brazilian jiu jitsu. He lost to Galvão—grappling and BJJ world champion on multiple occasions—but Weidman impressed the community with his ability. Six years later, Chris Weidman remains undefeated as the UFC middleweight champion, and he’s achieved black-belt status in Brazilian jiu jitsu, a feat that is sure to add fuel to the competitive fire that burns between he and Vitor Belfort—a tremendous BJJ player.

Gonna be wearing this around for a while. Thanks again @Renzograciebjj and Matt Serra for all the hard work!!

Less than three weeks away from fighting for his third consecutive middleweight title defense at UFC 187, Weidman received his black-belt from two of the sport’s transcendental figures: Matt Serra and his master, Renzo Gracie.

Of the occasion, Weidman said on Instagram, “Huge surprise today! I got my black belt from Renzo Gracie and Matt Serra! So honored and blessed to have these guys by my side!”