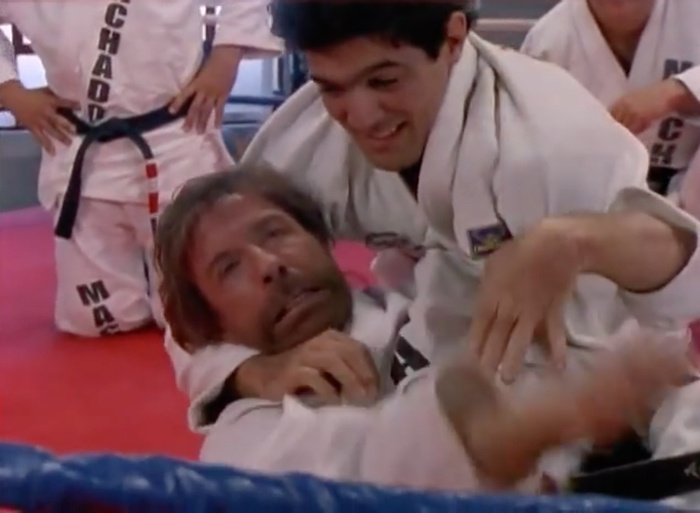 While this might sound like an amazing, balls-out action sequel birthed straight from the opportunistic/visionary mind of Menahem Golan during the glory days of The Cannon Group, it’s actually just hundreds of words of Norris taking an idea that most people would probably agree on—predatory and greedy insurance and pharmaceutical companies are severely endangering the average American’s right to life and liberty—and couching it in a bunch of light conspiracy rhetoric and some really poorly articulated martial arts metaphors. If one of Canada’s most infamous opinion writers from the ‘00s hadn’t re-emerged from obscurity to tell everyone about the time she attacked a stranger’s baby with her milk-free boob around the same time, it could have been a contender for most absurd column of the week.

Leaving aside the dubious politics of his argument—while I still believe that fighting is political, I don’t think the perspectives argued in this particular piece are 100% relevant to Fightland—Norris’s work is still quite baffling. The man has multiple degree black belts in multiple disciplines. He even awarded himself with a “Black Belt in Patriotism” and then wrote a whole book in which he applied the wisdom that he’s learned form a lifelong dedication to martial arts to his plans for MAGA-ing. So why do his martial arts metaphors have all the grace and depth of a white belt arguing on Reddit?

1. The title contains at least 20% of the column’s Jiu-Jitsu-related content.

Approximately 2/3 of the way through the piece, Norris writes: “A couple years ago, in a column I headlined ‘Obamacare jiu-jitsu,’ I explained that the art of jiu-jitsu is to use an opponent’s weight and strength to your advantage. I believe state governors and other local representatives can further choke the life out of Obamacare by using this martial arts technique. I’d like to repeat some of that information, as it would be timely right now.”

Then he uses the word “leverage” and liberally quotes from a Forbes article by “a health care investment analyst” named Avik Roy.

He concludes the piece by half-heartedly dragging the Gracies into it: “When I think of Obama and Obamacare, I can’t help but think of the words of Rickson Gracie, retired mixed martial arts world champion and a member of the renowned Gracie family, who once said, ‘If size mattered, the elephant would be the king of the jungle.’ Let’s continue to fight and show Washington that We the People are the kings of the jungle.”

And that’s it! The words “jiu-jitsu,” a passing reference to the foundation of BJJ theory, and a Rickson Gracie quote. The Roy excerpt doesn’t even demonstrate the concept of leverage particularly well.

Jiu-jitsu-style leverage can be used to make interesting arguments when applied to situations outside of the martial arts world—this Twitter thread on the Amber Rose/Kanye West beef of 2016 is a great example—but it requires more explanation and follow-through than Norris, a 3rd degree BJJ black belt, is offering here.

2. The column violates between 1 and 5 of the 12 tenants of Chun Kuk Do, the martial art founded by Chuck Norris.

The first rule of Norris’s moral code is “I will develop myself to the maximum of my potential in all ways.” But when Norris says that he’d like to repeat some of that information from his first column on jiu-jitsu and health insurance, he means literally cutting and pasting the majority of the OG “Obamacare Jiu-Jitusu” column from 2012. You try showing up a dojo with the exact same skills and knowledge that you had five years ago and see how impressed your sensei is by that level of inertia.

By attacking Obamacare and Democrats in general and Obama individually, Norris could also, depending on your interpretation, also be thwarting rules 5 (“I will look for the good in all people and make them feel worthwhile.”), 6 (“If I have nothing good to say about a person, I will say nothing.”), 7 (“I will give so much time to the improvement of myself that I will have no time to criticize others.”), and 10 (“I will maintain respect for those in authority and demonstrate this respect at all times.”).

There are probably some decent martial arts metaphors and similes to be explored when discussing the current nightmare that is the U.S. healthcare situation. Off the top of my head, for example, I’ve got: “Trump debates healthcare reform like a child who once saw some Olympic Taekwondo competition on TV: he thinks jumping up and down and yelling scores all of the points.” But whatever they are, they’re not lurking in the murky rhetorical shallows of “Obamacare Jiu-Jitsu” or “Obamacare Jiu-Jitsu 2.” When it comes to publicly discussing medical concerns, perhaps Chuck Norris should stick to his one true skill in that arena: telling plucky children that they have AIDS.