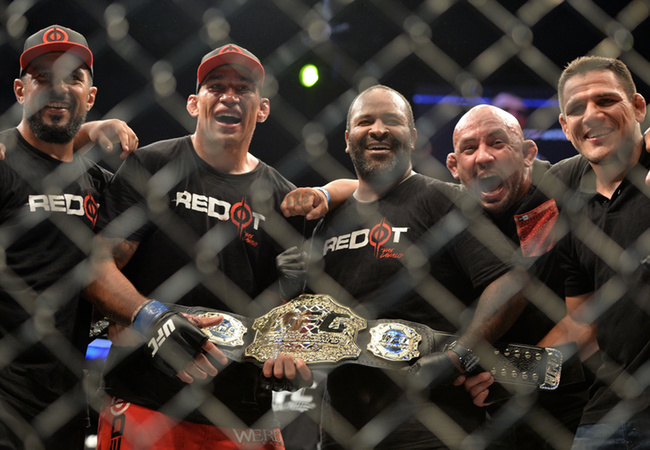 On Saturday night another one of Master Rafael Cordeiro’s Kings MMA products, Fabricio Werdum, shocked the world by submitting dominant champion Cain Velasquez in the third round of their heavyweight unification bout in Mexico City.

It is the second major upset in a championship bout that the Huntington Beach gym has pulled off in three months. Rafael dos Anjos completely outclassed Anthony ‘Showtime’ Pettis to win a decision at UFC 185 on March 14. Again, Pettis was the heavy favorite going into the bout, and it was a familiar situation for Velasquez in Mexico City despite being sidelined for 20 months with a knee injury.

Had it been the Fabricio Werdum that first graced the Octagon during his initial stint with the promotion from 2007 to 2008, Velasquez may have gotten away with his somewhat labored performance on Saturday night. Having only shown up in Mexico two weeks before the fight, a time that would not allow him to acclimatize to the altitude accordingly, ‘Vai Cavalo’ had the edge on the absentee champion having set up a base on location 40 days before UFC 188.

A task that has been pretty impossible outside of Junior Dos Santos’s first round KO of Velasquez at UFC 90, Werdum was able to stand with the powerful Mexican-American. Cordeiro’s influence was noted throughout the display as he confidently exchanged with Velasquez.

Having cut his teeth in the sport as a talented jiu jitsu player, it was quite the spectacle to see Werdum hang on the feet with Velasquez, and he was forced to weather and early storm from the AKA heavyweight before picking the right moment to pounce in round three. 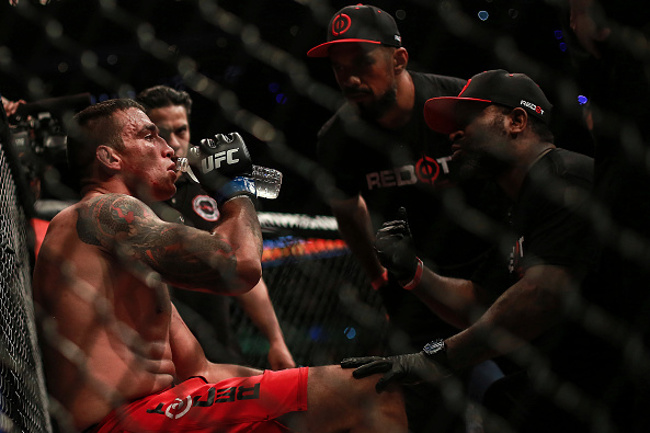 As Velasquez pushed for a takedown, Werdum locked up and arm in guillotine that forced the tap from the champion. Although his striking displays against Travis Browne and Mark Hunt announced Werdum as Velasquez’s next challenge, the submission finish of Velasquez was almost like a tip of the cap from the Brazilian to his formative years as one of the most exciting heavyweight jiu jitsu players in the world.

Of course, it’s not the first time that Cordeiro has brought a motley crew of Brazilians to the top of the sport. Wanderlei Silva and Mauricio “Shogun” Rua became the personification of Pride Fighting Championship under the tutelage of Cordeiro while representing Chute Boxe. The Brazilian team’s hard sparring sessions became legendary throughout the MMA world as the athletes tore into each other with reckless abandon. This lack of caution carried into their bouts and made for some of the most spectacular MMA showings of all time.

Although the Muay Thai expert Cordeiro never disappeared from the scene, there is no denying the contrast between the styles of his former Chute Boxe champions and the likes of Werdum and dos Anjos who now sit on top of their respective UFC divisions. The Kings MMA duo have shown tremendous technical ability during their UFC ascent, which was underlined by Werdum’s knockout of Mark Hunt to claim the interim heavyweight strap and Dos Anjos’s ability to pick Anthony Pettis apart. It’s not only the technical showings of Codeiro’s world champions, but the confidence that they exude while doing. More so than Werdum, dos Anjos had been completely written off before his clash with Pettis. There were telltale signs of his underdog status as the Brazilian lightweight fought all five rounds of the bout on his terms.

For a long time it seemed as though the Brazilians dominated the sport, which slowly began to change as UFC became the world’s flagship promotion. Even then, there was a time when Brazil held four of UFC’s divisional titles as Renan Barao, Jose Aldo, Anderson Silva and Dos Santos stood at the top of their respective brackets. Although there are three Brazilian champions out of the ten divisions inside the UFC’s catchment today, outside of the Kings MMA pair, only Aldo remains as a titleholder. On July 11 the featherweight king will walk into a bout that has opinion split for the first time as he meets surging Irish contender Conor McGregor.

Andre Pederneiras is one of the most respected coaches in the world having guided the likes of Aldo, Barao, dos Santos and BJ Penn to glory with Nova Uniao over the years. However, the Brazilian has made some noises to suggest that he could be stepping back from the helm of the gym after Aldo’s showdown with ‘The Notorious’. Although he claimed that he would still be active as “a consultant for Nova Uniao”, in his interview with Guilherme Cruz of MMAFighting.com, his absence could have some serious knock on effects for the gym’s athletes.

While Pederneiras’s record as coach speaks for itself, it seems like it’s very much Cordeiro and Kings MMA’s time to shine. Having taken Fabricio Werdum to championship gold at 37 years of age and given the evident evolution of the new champion—especially in his striking displays—there is no doubt that Cordeiro played a massive part in the heavyweight title capture.

There seems to be a lot of clamoring for a rematch between Werdum and Junior Dos Santos. ‘Cigano’ claimed a knockout victory over ‘Vai Cavalo’ in his UFC debut back in October 2008. The loss also resulted in Werdum’s marching orders from the promotion. There is obviously a long list of potential opponents for his first title defense—a rematch with Velasquez and Stipe Miocic are two other prominent options for UFC—but certainly, a second meeting with Dos Santos would really underline Werdum’s evolution if he took back his loss.

All in the Family: Rafael Dos Anjos and Kings MMA

I Trained With Rafael Cordeiro In Mexico