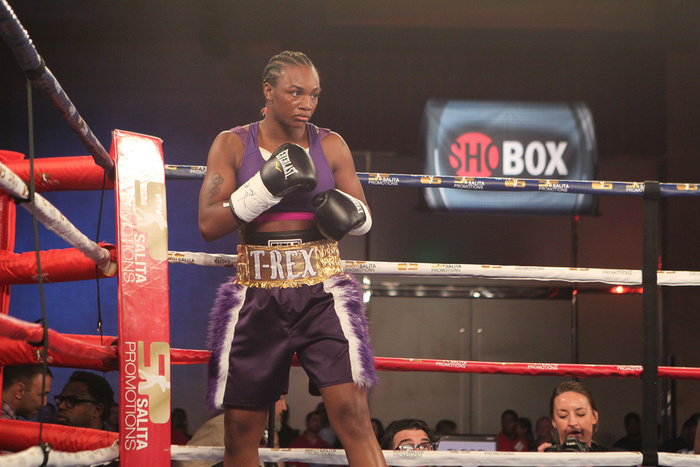 ​As Claressa Shields enters the ballroom at the sold out MGM Grand Casino, the crowd in Detroit immediately erupts and begins rapping along to her entrance music.

"Whoop that trick/I'mma make these suckas recognize I ain't playin'..."

The 21-year-old didn't choose some cookie cutter safe music for her historic bout against Szilvia Szabados, the first women's bout to ever headline a premium cable card. Shields has been unapologetically herself throughout her illustrious career, and she isn't going to start making concessions now.

After her thorough 4th round TKO destruction of Szabados, Shields held court at the ringside press table. Despite having appeared on every major network imaginable as an interview subject, Shields hasn't been molded into the standard fare cliché-spitting boxer. If she knows you're wrong, she'll let you know. So when one reporter makes an erroneous suggestion, she simply smirks and asks, "I wasn't getting hit, I dunno what fight you were watching?"

The fight people want to watch is any one involving her. And for good reason. Shields is arguably the greatest female amateur boxer of all-time, and by extension, one of the most dominant Olympians ever, having captured back-to-back gold medals while barely losing a second of any fight.

It's for that reason she is in the position she is in. Television networks love dominance, and so do fans. As much as people say they crave parity, it's the dynasties and the all-time great performers who are most popular, and both draw and gain the most money. This holds true in individual sports as well, such as tennis and golf, where Roger Federer and Tiger Woods became mega stars despite their chosen professions not typically occupying Page A1 of sports sections across America.

Women's boxing not only falls into that category, it typically neither gets press coverage, nor television coverage whatsoever. Prior to Shields-Szabados, there had been just one women's fight on Showtime since the turn of the millennium. 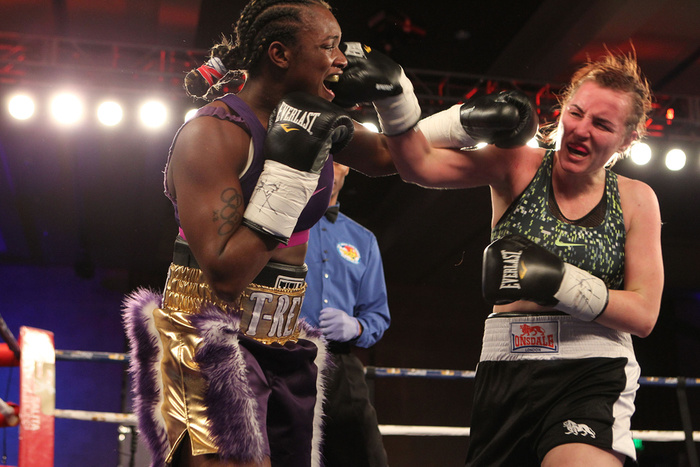 But there's something different about Shields, and clearly Showtime knows it. The network paid out more in rights fees than it normally does to get her on the ShoBox telecast, a show that typically relies on excellent matchmaking, rather than big purses and star power, to attract an audience.

Its chief rival, HBO, dropped the ball with Shields last year. The network acquired the rights to her professional debut against Franchon Crews, which was staged on the undercard of the Andre Ward-Sergey Kovalev light heavyweight title clash. Though the fight was originally scheduled to be a part of the pay-per-view telecast, it inexplicably was moved to the "free view" slot, airing on cable preview channels and on YouTube. This was despite the fact that nearly all mainstream coverage of the card itself came thanks to Shields and her marathon press tour, and as such, any additional eyes outside of the hardcore boxing fans who would have bought the event anyway no longer had to spend a dime.

Where HBO fumbled, Showtime picked up the ball and ran with it, doing the complete opposite: Giving Shields the main event slot 50 miles from her hometown of Flint.

HBO also fell into a common trope when it comes to coverage of female fighters in its handling of Shields. The company profiled her as part of the Fight Game program, highlighting her traumatic past, having fought her way out of poverty and abuse during her childhood. There's nothing wrong with telling her remarkable story—it's one that should be heard, and one that Academy Award winning Moonlight director Barry Jenkins is now taking a stab at telling. But too often, women in boxing are viewed through the lens of trauma, as sympathetic characters and inspirational story subjects first, and actual athletes second. Whatever the network's intentions were at the outset, when it came time to show her actual fighting ability, it and the promoters handling the pay-per-view opted for a dreary junior welterweight affair between Darlys Perez and Maurice Hooker over Shields' fun battle with Franchon Crews.

Shields fights with a pent up intensity seldom seen in high level boxing. She somehow manages a frenetic pace, while also being an accurate combination puncher, reminiscent of a prime Shane Mosley.

"I'm like Joe Louis and Sugar Ray Robinson put together," offers Shields with a smile. "That's just naturally how I am. If I was at Berston Field House, if I was in the basement somewhere fighting somebody, I would fight the same way with the same mindset."

According to CompuBox's Lee Groves, if Shields' numbers were extrapolated to the full three minute rounds enjoyed by male boxers, she would average 106 punches thrown per round, a prodigious output reserved for the sport's most heralded action stars. Against Szabados, she landed 88 of the 180 power punches she threw in less than four rounds, connecting at a 49% rate, while only being hit by any type of punch 11 times.

"Jesus Christ," exclaims Shields upon learning the lopsided stats from her most recent outing. Indeed, the beat down was bad enough that even her former Team USA teammates Mikaela Meyer and Virginia Fuchs could be seen ringside gasping and covering their mouths at times. 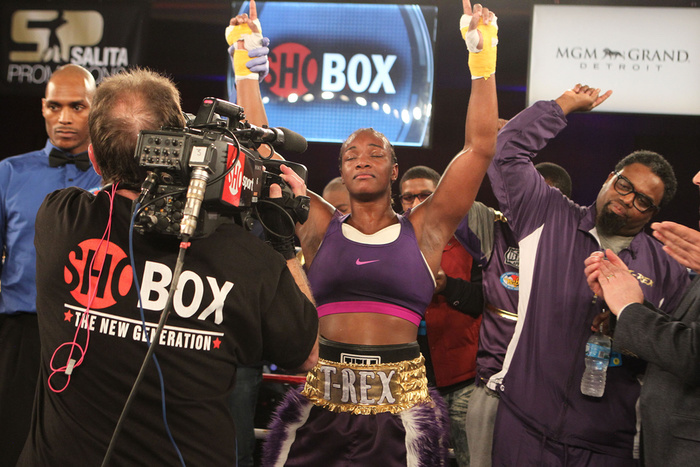 Therein lies the one hurdle when it comes to Shields' career: Who wants to fight her? This particular fight was offered to a current world title holder and a former champion, both of whom turned it down. Ultimately it went to Szabados, a former title challenger who determined the risk-reward ratio favored her either way—a determination she might have reconsidered following the bout.

"Who is the next "seasoned professional" I'm going to beat? Who want some? Don't all speak at once," tweeted Shields.

According to Shields' manager Mark Taffet, the goal is to match Shields with middleweight champion Christina Hammer by the middle of 2018. Hammer is a legitimate box office and television draw in her home base of Germany, where women's boxing has been enjoyed and appreciated for some time

Until then, Taffet says, it's about highlighting "unique aspects" of the fights she does have, and keeping her in the ring and in front of television cameras as regularly as possible.

In other words, marketing Claressa as the dynasty, not the underdog.

Before Shields collects her NABF title belt and exits the casino, the turns back to the press one more time.

"Christina Hammer don't want no part of me. And the thing is about the slower pace--I'm not gonna slow down for 12 rounds. I'm gonna fight the same pace I fought today. She better pick it up," she said.

The boxing world inside and out of the ring will need to adapt to her, because Claressa Shields will never, and should never change.