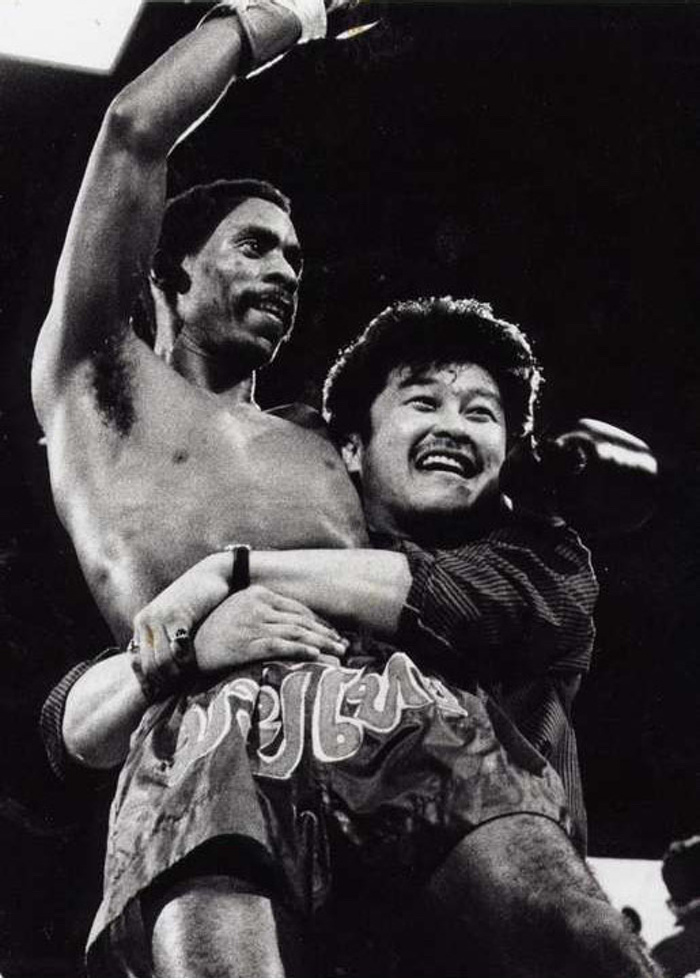 Fabio Pinca’s stunning victory last week against Manaowan Sitsongpeenong for the prestigious Rajadamnern Stadium 67kg/147llbs title in Bangkok, Thailand, brought to mind another magical and unrepeatable East versus West contest—one from another time, another country.

Ripple dissolve to one of the great belters in the international history of Muay Thai boxing. A fiery five round bout in 1990 between England’s Ronnie Green and Thailand’s Sombat Sor Thanikul at “Pickett’s Lock Leisure Centre” on the granite fringed suburbs of London town.

England versus Thailand. East versus West. Black and White versus Brown. This was the big one but it wasn’t a hyped up race war between two nations, cultures or colors. This was a sporting clash of titans, an honest to God contest between two glove fighters at the height of their powers and the peak of their game. Who would emerge as the victor?

I was far from the madding crowd at Pickett’s Lock on that cold, dark night in January. I could have bought a £20 ($25) ticket at the gym and cheered from the stands with the beered-up lads but elected instead to watch it on Rupert Murdoch’s Sky TV at a mate’s house down the road (a Richie Rich kid with a pricey satellite/cable TV package). This was 1990 and Muay Thai wasn’t a mainstream sport that you could simply follow on the BBC or ITV on a Saturday night like western boxing. Muay Thai was a minority caper. Something that was a bit like Karate but with boxing gloves and no white pajama suits, right? Wrong.  But that was the prevailing thought amongst sports fans and armchair potatoes. That and kickboxers not being good enough to glove up and go western. Double plus wrong. Still, at least Rupert Murdoch had the foresight to bung it on Sky Sports for a tiny audience of fans and punters.

This was sporting history, believe it or not. The first Muay Thai world championship to be held in the UK and broadcast live to Thailand. And although Pickett’s Lock in Edmonton wasn’t exactly the Royal Albert Hall in central London, it was a big deal, high stakes contest and a rare chance for our boys to show their grit against the Thais. I was eager to see it go down. This was 1990: the very beginning of an uncharted decade. I was 20 years old (just) and kickboxing, according to John Cusack’s character in Say Anything, and Frank Warren, the colorful English boxing promoter, was going to be “the sport of the Nineties.” How wrong we were. It turned out to be Mixed Martial Arts instead.

That night Ronnie Green against Sombat was the main event at Pickett’s Lock. It was a brutal card of Thai muggings worthy of a Bangkok back alley. The first Thai swiftly reduced tough as nails Irish kickboxer Paul Lenihan to noodle salad with doomsday kicks. Leroy Atkinson, a concrete-shinned kick fighter, fared little better in his match against the highly dangerous Dok Mai Pah, another Thai with bombs for limbs. This was home turf. And the Thai visitors were trouncing us with muscular elegance. Would Ronnie Green salvage pride and win one for Queen and Country? Not half.

In the blue corner, hailing from Deansgate in Manchester and weighing in at 135llbs, Ronnie Green was the have-a-go kickboxer from Master Toddy’s stable of pugs and thugs. He’d been punching the clock with Toddy ever since 1978 and was a game competitor, eager to improve his war craft and willing to have a crack at just about anyone in a square foot ring. Simply put, if Ronnie Green, the first Brit to become a world Muay Thai champ, was fighting on the GLORY circuit today, he would be a big assed multi-millionaire with a gaggle of celebrity friends in his Instagram pictures. However, back then, he was just an obscure knight of the fighting realm; a minority sportsman who, said the critics, should have really been a western style boxer instead.

In the red corner, and fighting out of the legendary Sor Thanikul gym in Bangkok, was the formidable figure of Sombat the superstar Thai kickboxer. In white shorts and trim with a big, scary scar on the top of the head and a vacant glint in his eyes, he was no chocolate soldier. A reigning Lumpinee Stadium champ, “a terror of the rings” (and Bangkok nightclubs) from 1988-92, Sombat was one of the most popular and dangerous fighters around. Standing tall for a Thai at 5’10”, he usually fought between 145-155 pounds and was always wheeled out to dole beatings to farangs (foreigners of western origin) on the international fight circuit. A relentless and effective ring operator, with GPS-guided bombs for shins, he was the best, if not the best, fighter in the Sor Thanikul stable.

The bell went ding. Switch-hitting and firing combos of punches and kicks, north and south, east and west, Green went to task and dominated Round 1. Was the Thai visitor puzzled by the ferocity of the fast hitting Mancunian or just starting slow? In Round 2, Green was clearheaded and surgical. Working in combinations of 3-5 shots, he ventilated the cranium of Sombat and sent him down with a meaty right leg kick. The first two rounds belonged to Green but there were three more to go and Thais usually take opponents to task in that territory of a fight. Sure enough, Sombat came out in Round 3, all guns blazing, and tried to tie up Green in a death clinch with his knees. Green, nonetheless, was able to use his ring craft to nullify the shots and staggered Sombat with a right cross to the kisser. Three rounds down. Sombat was behind on points.

Thais don’t like to lose and Sombat returned to the fray in Round 4 with silent rage. Green countered and obstructed every shot and dropped Sombat to the floor once again. He was throwing grenades left, right and center and picking the Thai visitor apart with ease. Sombat’s face was beginning to swell up and Green’s leg kicks had done their trick on his thighs. Up and down, with hands and legs, coming forward, this was the way to fight and beat the Thais. At ringside, commentating the match was Dale Cook, the American kickboxing legend. “Ronnie Green,” he said, “is on the verge of becoming a hero in Britain.” If only Britain knew who “Ronnie Green” was. This was Thai boxing. And Sky Sports or not, its audience back then in 1990 was very small indeed.

With a deadeye stare, in the fifth and final round of the contest, Sombat ran amok. Unfortunately, he flew straight into another asteroid belt of high punches and low round kicks. Green, “the Black Tiger,” the “Machine Gun” switch-hitter, had stolen the night from the Thai superstar. The crowd at Pickett’s Lock were up on their feet and chanting “Ronnie.” Though he had clearly won all five rounds, the judges at ringside, two Brits and one Thai, scored it a draw. The crowd drew a gasp before booing. Master Toddy stepped into the ring in his Saturday Night Fever white suit and raised Green’s arms in victory.

It was a great night for British Muay Thai because, respected verdict of the judges aside, Ronnie Green had shown to the world at large how to beat the Thais at their own sport. The following week the bout was the talk of the locker room and the videotape much passed around. The fight, in short, is a master class and one well worth the analysis of repeated viewings.

Not long after Ronnie Green got a rematch with Sombat. There were few niceties. Blooded by their first encounter, and sporting longer hair, Sombat was out for high-pitched revenge. In many ways the second encounter surpassed the brutality and intensity of the first. Shooting kicks and punches with uncanny accuracy, Green dominated Sombat over five rounds, beating him to the shot with concussive repetition and punching through the sloppy guard of the Thai with Hellfire missiles. Boxing up and down and checking the target, this was classic Toddy style. Hardly a teep (front push kick) was thrown by either man during the contest.

Poor Sombat. It was same-same but different to the first encounter. He was rattled and flummoxed by the destructive limbs and cheeky Ali shuffle of the black farang (foreigner). Not to mention his kill to succeed. For Sombat, fighting this Ronnie guy, home or away, was a five-round stroll in a green and unpleasant land of low kicks and fast hands. With punishing attrition, Ronnie Green had gone to work on Sombat Sor Thanikul and, once again, had made the big shot fighter from Thailand look technically bankrupt. This time round the judges had their spectacles on and Ronnie Green, “the Fighting Gentleman,” from Manchester in England won the bout on points.

The two men never met nor fought again. Sombat went on to fight Ramon Dekkers in 1991 and lost by unanimous decision on home turf in Bangkok. Like the Flying Dutchmen, Sombat died young from health issues unrelated to competitive fighting. Ronnie Green hung up his gloves in 2002 after a fight career dating back to 1979. He exited the ring as a distinguished world champ, in four different weight classes, with a highly respectable record of 90 wins and 8 defeats. Now aged 56, Green continues to live and teach in England. “When I was fighting,” he said in a 2014 interview, “I knew that I wanted to inspire British fighters to go out to France, Holland, Japan and Thailand to compete. There was nobody before me in the UK at world level and I wanted to be the first one to let the UK know that we can do it too, compete at world level with the best and win. Fear is fear. And if you think you can’t do it, you can’t. I believed I could and I did.”

Mind the Glap: One Man's Love Affair with the Thai Spinning Elbow