Cleveland Has Its Gritty Champ 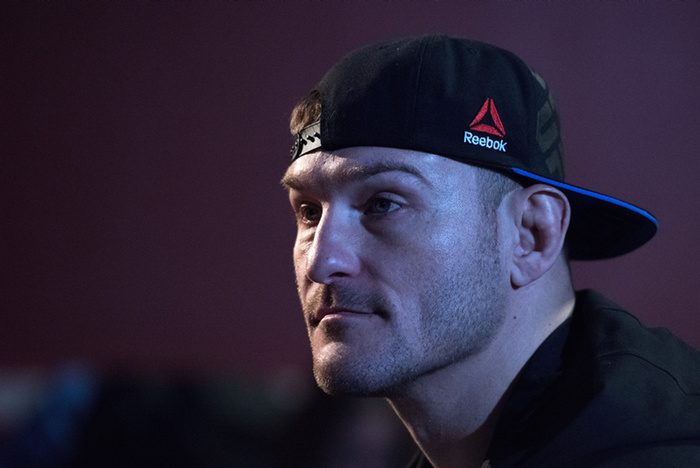 Stipe Miocic, son of Croatian immigrants to Cleveland, put Fabricio Werdum to sleep early in the first and became a heavyweight world champion. He shouted it out in his hoarse, Midwestern accent, his eyes wide with shock and disbelief as his team jumped and yelled incoherently around him. Cleveland finally has a champ, not the Browns nor the Cavs, but a firefighter from the Strong Style gym who hasn’t changed much in the decade or so since he started out fighting, only getting better and more fierce, finally becoming the champ his peers saw in him from the very beginning.

Ohio is at the very edge of the region we call “the Midwest,” defined in the famous sociological study, Middletown, as comfortably average, unchanging, and typical of the American working class. When all else shifts and morphs, the Midwest remains stolidly simple, a Rockwell painting in which the make of the cars change, but not much else. Something finally changed for Cleveland though, long suffering butt of the sports world, confirming that not all things coming out of Ohio are destined to fall just short.

The region does churn out great fighters on a pretty regular basis. The Miletich fighters out of Iowa; Milwaukee’s Roufussport champs; Brock Lesnar and Sean Sherk out of Minnesota. And now Stipe Miocic out of the Strong Style gym in Independence, Ohio. Do all of these athletes have something in common? Is there a link between Cincinnati native Matt Brown and Stipe that goes deeper than just training with Markus Marinelli? Can you place Ben Rothwell out of Wisconsin next to any other fighter out of the Midwest and draw parallels?

The authors of Middletown would argue that, yes, you could. There are values that draw people in the Midwest together and forge communities despite the constant pressures of technology and demagoguery and changing demographics. Wisconsin, for example, might be willing to elect a fierce opponent of the middle class in Paul Ryan, because he portrays a “next door-family man” demeanor, but they’ll choose anyone other than the brash loudmouth currently leading the Republican primaries.

There are alliances in the Midwest between back to the land hippies, upper crust financiers, and close-minded old farmers that have created a wealth far less ostentatious than the flash of El Lay or the Hamptons, but perhaps more enduring. Towns like Sioux Falls and Dubuque and even Cleveland have turn of the last century main streets dripping old, sleepy wealth that have since become global corporations with assets across the board. You’d never really know it though, because Midwesterners ain’t trying to make it rain. At least not where anyone can see it.

Midwesterners are not all hard working simple folk who eat meat and potatoes every day, but there is something to a reputation and its effect on one’s personality. If you call a kid a thug often enough, you’ll get what you wished for. Out here, between the Rockies and Appalachia, if you tell a kid to be humble and gritty and take nothing for granted, it’ll seep in over time. It also gives rise to a certain type of humor that takes the solid base of humility and work ethic and turns it on it’s head from time to time. Just for kicks. 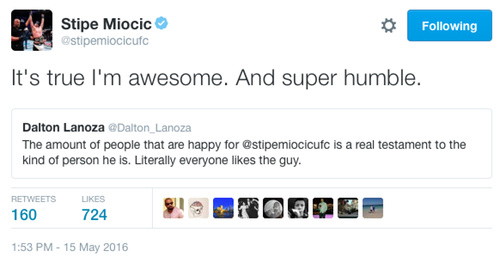 Stipe seems like that kind of a person. He fights fires first, then goes to the gym to fight people. Down to tell jokes and be the life of the party, but also completely disbelieving and thunderstruck when the big dream finally comes true. Although he has a build and athleticism we rarely see in the heavyweight classes, he still carries it Ben Rothwell-style, deceptive enough to get the great Fabricio to charge in heedless toward his own demise.

That’s the contradiction at the heart of the Midwestern stereotype: the weight of the community creates a person both unable to leave the day job, and yet fully capable of transcending the daily grind.

Stars born between Ohio and South Dakota tend to be overlooked until they’ve delivered a short, sudden right hook to whomever is champ. Stipe was not necessarily overlooked, but maybe not truly understood. He lost to Stefan Struve and then to JDS in a hard fight, and it seemed like he was like most other heavyweights in the UFC: strong enough to beat anyone on a good night, but also susceptible to anyone else in the division on a bad night. That might still be the case, we won’t know until he defends his title a few times, but he comes from a place known for consistency. Do we finally have a heavyweight champ who can last longer than a few fights before succumbing to injury or flash KO?

Cleveland sure hopes so.

How Stipe Miocic and Misdirected Aggression Killed the King