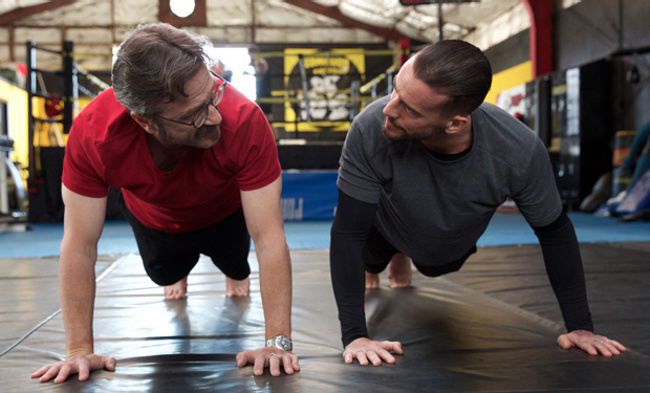 As a born critic there have been few things I’ve allowed myself to love all the way. There’s the Smiths and the Marx Brothers and the novels of Philip Roth and the films of Terrence Malick and The Third Man and The Wire and Curb Your Enthusiasm and doo-wop from the Fifties and girl groups from the Sixties and the Beach Boys. And there’s MMA, of course. With everything else my affection comes with qualifiers and conditions, but when I’m in I’m in all the way.

My latest object of devotion is comedian Marc Maron’s podcast, WTF. Time I used to spend reading books or talking to friends I now spend listening to this embittered middle-aged comedian talking through his neuroses and getting actors, musicians, comics, and occasionally the president of the United States to talk about theirs. I tell everyone I meet to listen.

The reason for my newfound near-religious (and evangelical) fervor is because WTF, which Maron started broadcasting five years ago at a low point in both his career and personal life, is about evolution—the growth of the narcissist into the universalist, the self-consumed into the empathetic. What started out as an outlet for Maron’s anger, discontent, rage, jealousy, hostility, and self-loathing, an attempt to make sense of a collapsing career and an antagonistic world, has grown into one of modern media’s few opportunities for actual human connection. Maron understands humanity’s shared anxieties, neuroses, and addictions, and guests open up to him, confessing their own collapses, fears, and shame, even suicide attempts.

Marc Maron: "I think what resonates with people [about WTF] is a kind of raw honesty and authenticity."

The success of WTF has led to a TV show on the IFC channel, Maron, about a comedian named Marc Maron who records a podcast. The show is currently in its third season, and the fictional Maron is getting ready to become a TV talk-show host. On tonight’s episode, which airs at 10pm, WWE star CM Punk meets Maron at the Submission Factory gym in Pasadena to help him get in better shape for his debut. Punk plays himself, a former longtime professional wrestler trying, at the age of 36, to transform himself into a mixed martial artist.

CM Punk, born Phillip Brooks, made his World Wrestling Entertainment debut in June 2006, defeating Justin Credible at the Hammerstein Ballroom in New York City. During his eight years with the promotion, Punk was a hero and a heel, the heavyweight champion and a tag-team champion, the world’s only two-time winner of the Money in the Bank ladder match, a seven time Slammy award-winner, and undisputed master of the Go to Sleep maneuver.

Last year Punk retired from professional wrestling, citing health problems, money concerns, and a sense that he was being “creatively stifled” by the WWE. Six months later, at a UFC event in December 2014, Punk announced that he had signed a multi-fight contract with the UFC. At the time Brooks possessed little actual fighting experience and was widely derided for his decision, but he sounded less concerned with physical injury or embarrassment than the slow death of his spirit.

CM Punk: “In pro wrestling, it’s fake. People always get offended by that word: ‘No, we like to say it’s predetermined.’ For whatever reason, people get angry at ‘fake’ but ‘predetermined’ eases the blow? It’s fake. At the end of the day it doesn’t really mean anything.”

Knowing Marc Maron as I do (both entirely and not at all), it’s strange to think of the comedian’s life dovetailing with the life of a professional wrestler-turned-cage-fighter. After all, one of the things Maron is always talking about on WTF is his distaste for sports and his discomfort with and resentment about the trappings and expectations of conventional masculinity. But Maron rebuilt himself and his career by digging into himself and exposing his frailties to the world, finding a new sense of purpose in self-exposure and in soliciting and connecting with the self-exposure of others. And Punk turned his back on the orchestrated play-acting of the “sports entertainer” and threw himself into the most frightening sport America has to offer in the hopes of creating a new version of himself. Both found something meaningful in a life that was more vulnerable, more dangerous, and more genuine than the one they’d been living. Both sought redemption in transformation and the authentic life. They belong together.