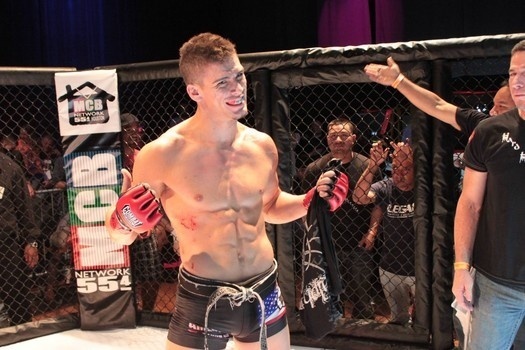 I come to Texas from Connecticut by way of Iowa and because in Iowa I came to need violent caged encounters between able-bodied men, the first thing I do is ask around for someone young, cocky, undiscovered, and undefeated. The name comes back: Charlie Ontiveros, Charlie Ontiveros, Charlie Ontiveros. Charlie Ontiveros is a 21-year-old from Cleveland, Texas, a place that rings familiar, and when I look it up I realize that this is the Texas town where 19 men were charged with sexually abusing a single 11-year-old girl. I don’t know what to do with this information, so I just call Charlie Ontiveros. It’s his father on the line. I say my name is Kit and I must, absolutely must, meet Charlie and may I come to all of his fights starting with tomorrow’s. To everything I say Charles Ontiveros Sr. says, “Yes ma’am,” which is disconcerting but also amenably tractable, and that’s part of how I end up in a Houston locker room watching a man plunge a needle into a red crevasse over Charlie’s left eye. But only part.

These are among the details I do not give the suited man who comes to eject me from Charlie’s inner sanctum, past various levels of security guards I had expertly evaded and deep within the theater at which the event was held. (The key to guard evasion is affecting the confident air of someone — a fighter’s girlfriend or wife perhaps — who belongs in the room, and applying an amount of eyeliner sufficient to render such a performance convincing.) Someone tells me the suited gentleman is “from the state,” so I name him “Texas.” I do not begrudge Texas his intention, or even the enjoyment he evidently takes in wielding his guardly authority, but when he catches my eye across the room of fighters and bends and unbends his index finger in the manner of a scolding librarian, I know that Texas and I will die enemies. “What,” he asks, “are you doing here?”

An excellent question, succinctly put. Something stagnant in the word “wellness” pushes me here; as does talk of “life-years,” and the aggressive, pointless health of my nearest neighbors. A friend’s mother, midway through a master cleanse, shudders with horror when I say I’m bound for Mexico. I suppose I have come because something about other peoples’ mothers makes me long for a tribe with no ethic of self-preservation.

I say, “I just have this media pass.”

Texas cocks his head, narrows his eyes, and tugs on an orange paper bracelet around his wrist. “If you belonged here,” he says, “you’d have one of these.”

I suspect it would take more than a bracelet for me to belong here, pleather-couched between a reticent black 260-pound heavyweight champion wearing a hat that says “Jesus Didn’t Tap,” his extremely gregarious black 275-pound friend Chris in the same, a chubby Hispanic coach named Mando currently absorbed in the wrapping of Charlie’s hands, and lithe, lily-white 170-pound Charlie himself. Charlie’s an undefeated welterweight, long and lanky with prominent cheekbones that strike me, in this particular context, as dangerously exposed. Which is to say that when you watch enough fights you start to draw a catastrophe-minded map of the body, marking all the spots most likely to snap under impact.

Behind Texas and me, the fighters and their cornermen are engaged in a nervous celebratory chaos borne, I suspect, of the need to distract Charlie, who is in a silent pre-fight fugue as Mando wraps his hands. The joke in the room is that when Derrick, the slow-to-speak 275-pound heavyweight who will tonight successfully defend his belt, has mounted you, the best way to get out of the situation is to come onto him.

“I just pinch his butt,” says Chris. “He jump right up and say, ‘Stop with that gay shit.’”

“I lick his ear,” someone offers.

“He talk so low you can’t hear him,” someone says of Derrick.

Chris glides about the room as he speaks. “Do a split,” someone demands, and the 275-pound superheavyweight does a to-the-ground straddle worthy of a Texas cheerleader.

“I ain’t acting too colored,” he says, apropos of nothing in particular. “I just watched Django before I came here is all.”

Charlie is laughing so hard he is crying, wiping tears from his cheeks. Like Derrick, he speaks very little, but when he talks it’s in a deep low drawl with long pauses in between words. He’s got an unfighterly paucity of ink, and the ink he does have, on his ankle, he obtained without the permission of his father. “We’re going for an All-American Boy look with him,” says Charles Sr. Everyone in this room knows Charlie needs a “look” because he is on his way to the UFC or Strikeforce or Bellator and the attendant big-show sponsorships. It might happen after this fight, and it might happen after the next. Tonight Charlie’s opponent is a Strikeforce veteran named Todd “Maniac” Moore, but the fact that Moore is a Strikeforce veteran and a superb wrestler is not what has everyone worried. What has everyone worried is the fact that Charlie Ontiveros, undefeated welterweight, pride of Cleveland, Texas, UFC-destined, is about to fight with a broken thumb.

It happened a week back while sparring with a training partner, a break close to the base of the hand. Charles Sr. begged him to pull out, but Charlie hates it when his opponent gets switched at the last moment — as had happened three times in his three professional fights — and didn’t want to inflict that fate on Moore. Behind this magnanimity is the certainty that he’ll win anyway; he has never, after all, lost, never really been challenged.

“They’re calling your name out there,” said Charles Sr., just back from a visit to his wife in the arena.

I join the audience outside. In the way of any traveler, I ascribe every aberration to the jurisdiction. I have been to fights at bars and strip clubs and flyover state fairgrounds but never have I see a barefoot ring girl — this one’s Vietnamese, in a bikini — and I’ve never seen an announcer cat-call a ring girl on his descent from the cage. “Texas,” I think, and that’s when Charlie walks through a red velvet curtain and shows himself to a screaming crowd. This is the moment, as always, when all the disparate elements come together, when the crowd snaps into a terrible harmony. Behind me sits a 5-year-old, and his small nail-bitten fingers grip the back of my seat as Charlie’s brows are Vaseline-slathered.

Charlie’s got six inches on his opponent, but it looks like 10 because he is everywhere long and Moore everywhere short. They dance a bit. Charlie lands a hard right on Moore’s face, and we can all see that Moore’s operating on a different time scale. By the time Moore realizes he has been hit Charlie is kneeing him in the stomach. Moore falls to the ground, turtled, and Charlie drops on top of him so fast it’s as if they fell as one man. Right back up they pop and Charlie drops his hands, dances lightly, tauntingly, Anderson Silva-like, gliding about the cage in a gleeful side-skip I believe instructors of women’s aerobics call a grapevine. That’s when Moore shoots and Charlie, falling, throws both hands on the canvas. He feels the bone in his thumb crack a second time.

Adrenaline swallows the pain but not the scrape of bone-on-bone, the pop, some deep and definitive readjustment in the mechanism that is his hand. He’s worried that bone has already broken through skin, but when he looks the wound is still invisible, and the bell rings.

“My thumb’s broke,” he tells Mando, and for the first time since the fight began the base of his hand burns through the wrist.

“Just bring him to me in pieces,” says Mando. “Jab with your right.”

Were a fighter’s psychology a simple thing we might say that the shock of his rebroken thumb has awoken something in Charlie because round two is not at all like round one. He lands a hard jab to Moore’s face, a kick to the body. Moore can’t possibly match Charlie’s speed so he shoots in a panic, dragging Charlie down, but Charlie finds his footing and on the way back up he throws a hard knee into Moore’s stomach. Moore is hurt, and Charlie, excited, follows up with a high kick, a jab. While Moore is on the fence trying to shield himself from the force of Charlie’s onslaught the entire crowd stands, screams with manic gratitude.

As he’s striking, Moore gets both of his arms under both of Charlie’s and drags him to the ground with barely a struggle. A moment ago we were watching nature use a man to embody itself; now we watch a man caged. Moore is on Charlie’s back, hooks in, arm around Charlie’s neck. Charlie rotates, mounted now. Moore punches with both hands, arms curved like a video game gorilla, and Charlie keeps turning and turning like a kid rolling down a hill, but however much he rotates he remains a target trapped between Moore’s legs. Charlie tries to grab Moore’s arm in order to control his wrists and stop the onslaught. The problem with this otherwise solid plan is that in order to grip the wrists of a man trying to pound you, one needs operational thumbs.

And so Charlie keeps spinning. They look like some kind of industrial-age machine, Moore pounding as Charlie rotates. Moore jabs and jabs and jabs with his right fist, and gradually the jabs turn into elbows, targeted at Charlie’s torn brow. It’s hard to see past the blood. We look because Charlie, in his abandon, has made us brave enough to look. After 40 seconds of ground-and-pound, the ref taps Moore on the shoulder. Todd “Maniac” Moore obtains, from outside the cage, a rolled up Texas flag. He unfurls it, lays it at the center of the cage, kowtows, and kisses the lone star.

Charlie is seated on the canvas, slumped against the fence as the doctor wipes blood from his face and presses the wound. “I’m not worried about my face!” Charlie snaps, “I’m worried about my hand.” He looks at his father, whose eyes are watering. “I’m sorry.” “S’alright,” says Charles Sr. wipes tears away with the palm of his hand.

By the time I get back to the locker room the doctor has a needle deep into a cut above Charlie’s eyes. “I’m sorry I snapped at you,” Charlie says as the man digs around in the wound. The doctor laughs and says no more as he pulls thread through skin 10, 11, 12 times. The room is dead quiet but for an occasional outburst of embarrassed reassurance. “You rocked him,” Mando says, then goes quiet. “You’ll be okay,” says his father. “Your mom and me always knew, since you were a baby and grabbed my finger tight, that you was going to be a world champion.”

“It’s a learning experience,” says Charlie determinedly, as if he heard that line somewhere, and that’s when I know we’ve all lost something because there are limited lessons to be learned by losing a fight to which you came injured. They’re lessons about prudent judgment, wellness, self-preservation. They’re lessons about “sticking to the game plan” and “staying healthy.” They’re lessons that make someone like Charlie Ontiveros, a boy who once would walk broken into a cage, just a little more like the rest of us. I want to tell Charlie that I came here not to learn but to unlearn those lessons, but I’m not allowed in this room, and the doctor is talking about how best to remove each stitch without risk of infection.