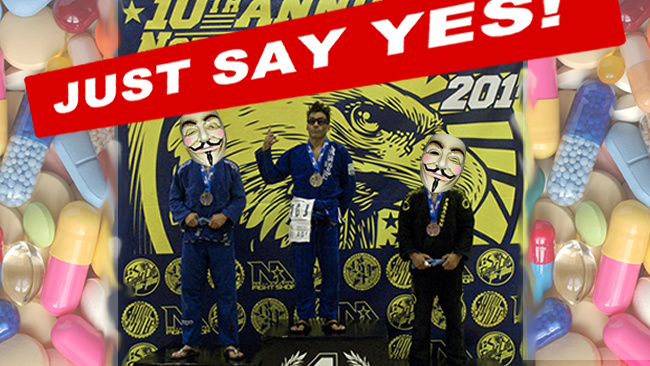 So I missed Metamoris 4. Which sucked because when I watched the matches later that night, holy shit were they great. Especially Chael Sonnen vs Andre Galvao. Now I don’t mean ‘great’ in the sense that I was shocked by the outcome—let’s face it, oddsmakers ranked Chael as a +1400 underdog—but by ‘great’ I mean in how he flipped his middle finger at both the Nevada State Athletic Commission, and those saying he didn’t belong on the same mat as one of the most decorated jiu jitsu champions to ever live.

Many regard Chael, with his smack talk and theatrics, as the ultimate entertainer. But review his bio—youth and high school wrestling standout, Division I All American, Greco Roman Olympic trialist, elite MMA title contender—and you realize the guy is really the ultimate competitor, driven to constantly test himself.

Which is why I skipped his Metamoris match—so I could compete at the NABJJF North American tournament, and test my jiu jitsu.

Friends who don’t train often ask, why put yourself through the pain of training every day, cutting weight for a competition, setting aside an entire Saturday, subjecting your to possible humiliation, etc.

For the test, I say.

It’s really that simple: for the test.

Three to four times a year I compete in a jiu jitsu tournament. It started with my wanting to understand the mental side of MMA—specifically, what a fighter goes through in the months leading up to a fight. Now, I wasn’t about to start training MMA (head trauma, fear of injuries, the sound of a solid leg kick), so I joined the Art of Jiu Jitsu academy, in Costa Mesa, California, the day it opened, a little over two years ago. 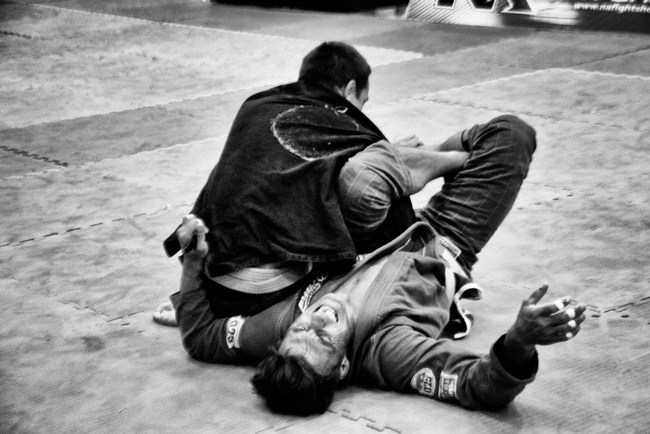 AOJ is my first Brazilian jiu jitsu gym. I’d grappled here and there, even taken a few private lessons with BJJ legend, Fredson Paixao. But this was my intro to the world of sport jiu jitsu.

And that’s something I didn’t realize: jiu jitsu gyms are broken into sport (where the primary emphasis is competition, and advanced non-street techniques), self-defense (emphasis on deflecting strikes and real-world encounters), and casual (my term for the more fun/relaxed gyms, which I really enjoy visiting).

So in my ignorance I joined a sport jiu jitsu gym, and within a few months found myself competing in my first tournament. Coming from a wrestling background, I felt comfortable in no-gi classes and no-gi competitions, but I was utterly disoriented in the gi. First two tournaments I lost in the first round, and that’s when I learned what Ronda Rousey meant went she told me, “Sports are a metaphor for life.”

Which goes to say, that in one-on-one competitions, be they MMA/judo/jiu jitsu, or even tennis, you test yourself, face obstacles and fail, then adjust your approach, fail again, train smarter, succeed, fail, succeed, etc.

And that’s the secret sauce for life: fail, fail, fail, and finally, if you don’t quit, eventually triumph.

Which is why Royler Gracie said that everyone should compete at least once. Climb the podium or not, you’ll learn a few things you can’t learn from a book.

Such as dealing with the stress. You’ll try and ignore it, but in the days before a tournament the stress mounts. Not unlike prepping for an exam, or business presentation, or job interview. You’re cutting weight. Pondering the correct strategy.

You’ll also learn that there’s no way to cram for life. They say confidence is the result of preparation, and that’s definitely the case with jiu jitsu. In grappling there is no ‘puncher’s chance.’ Superior technique trumps size, conditioning, and strength every time. Those things are only a factor in somewhat even matches. 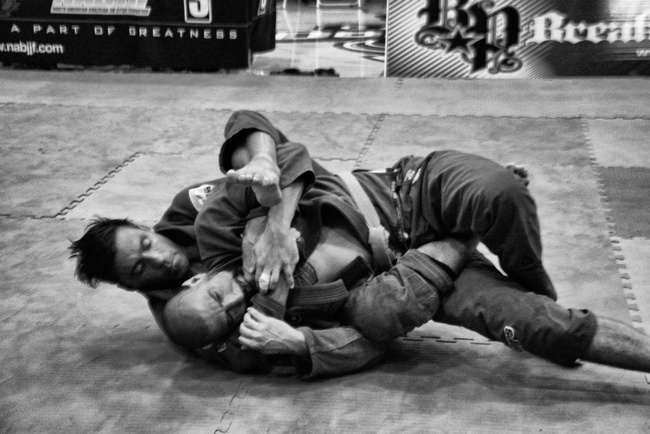 After your losses, which will haunt you for weeks, you double down on drilling sessions, logging five-day weeks for half a year. Lo and behold, you win your next tournament. It’s not you, you realize, it’s the preparation. This epiphany helps dampen the stress, because now you’re excited to try those shiny new techniques.

The Miyao brothers (internationally-revered BJJ players) said, “I don't think about beating my adversary, I just think about trying to do the movements, to do the perfect movement. I try to do my technique against his. I don't fight against a person, just against his positions he uses and his techniques.”

As match time approaches you check your weight on the official scale. Praying you’re not over. Because then it’s all about running laps outside or scrambling for a sauna, trying to eke out a few ounces of sweat, which will leave you dehydrated and spent. Unprepared is all this means.

Over the arena loudspeaker your division is called. Watching the ongoing matches, your heart starts jacking. You stuff everything in your bag, and notice your hands are shaking. You pace a bit, check your phone, then approach the bullpen, hoping you didn’t forget anything. You show your ID, and a tournament official checks your weight and your gi (or your no-gi trunks and rash-guard) to ensure compliance. Again, adequate prep.

Then comes the waiting game. Again, more prep for life. You stretch on the hard gym floor, roll around a bit, trying to ignore the constant bullhorns and cheering. The endless procession winners and losers returning to the bullpen. Some tears. Some smiles. Hear your name and it’s time. You stand and glance at the exit door, then at your opponent. Heading for your match feels like a walk to the gallows.

When you’re alongside the score table, the ref signals both fighters to enter the mat. Fuck. This is it. You bow and step to the center. Shake hands and it’s on.

Win or lose, that steady adrenaline buildup is a drug. One of the most powerful you’ll ever feel. It’s why Chael accepted the match against Galvao, and it’s why, if you are an MMA fan and want to know what’s the what, you should sign up for a jiu jitsu tournament. No excuses, there are divisions for every age and experience level.