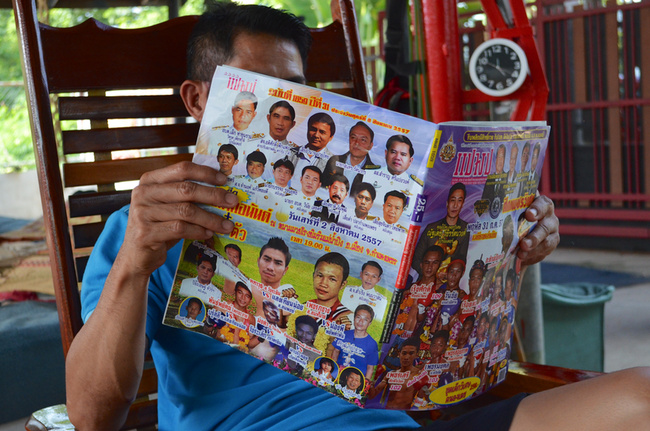 [I met Mr. Fat in July 2014 in a rural part of Thailand's Isaan region. Only 34 years old, Mr. Fat has spent the past eight years as a professional gambler in Bangkok. He has since returned to his family's home in Isaan with his wife and newborn child. My local friend Boom, fighting out of Giatbundit Gym, introduced Mr. Fat to me as his cousin. During dinner at the family's home, Mr. Fat spoke for hours about his life betting on fights in the capital.]

Let me make this clear: I didn't start off loving Muay Thai. I loved gambling, and that's what opened my eyes to the beauty of Muay Thai.

First time I ever placed a bet was when I was a kid. A bunch of the adults in my village in Isaan were watching a soccer match on TV, and I said I wanted to bet on it. They laughed at me, but they weren't above trying to take my money. I called it right the first time and walked away with some cash. After that, I was hooked.

I kept betting on soccer matches with the adults, and that's how I learned about odds, how to research a team and make a safer bet. Then I got into gambling on Muay Thai, which is way better than soccer because it's a faster sport. You wait minutes, instead of hours, for the final result. 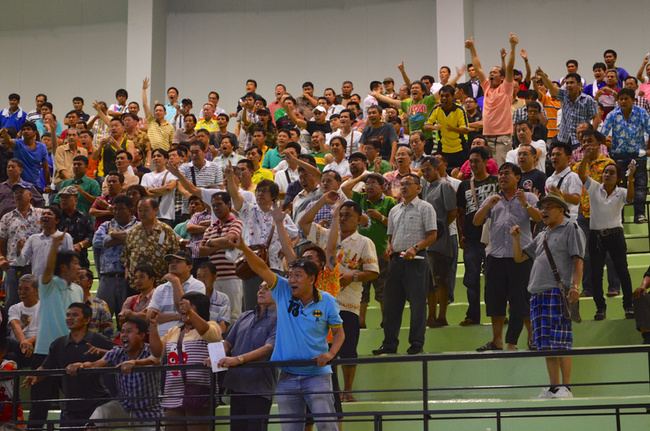 It was a hard world to break into. I remember my first night at Omnoi Stadium in Bangkok. I was just trying to learn the rhythm of gambling, and all the hand signals they use to communicate with each other. I ended up making a small bit of money that first night. I thought, Hey, this is pretty easy! So I kept going back. And then, of course, I started losing money. All the time.

But I kept going, mostly to Omnoi and Channel 3. It took me about six months to get comfortable with the hand signals. It was pretty overwhelming at first, and I lost money because I was just a small fish. The other gamblers saw I was green and they loved it.

The gamblers all stay close to each other. You have direct access only to the gamblers in your immediate area, and there are clumps of gamblers all over the stadium. Someone might have a notebook, and he'll take notes on who owes what, but for the most part, you keep track of it mentally and you exchange money after every fight, often after each round. Of course, I always want to see a KO. That means I can get my money faster and move on to the next fight. 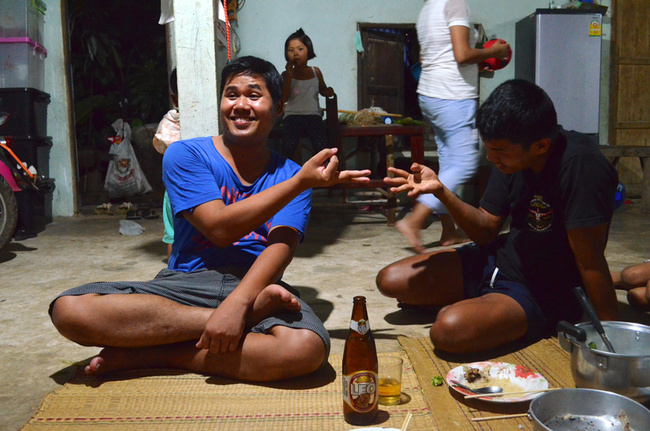 Mr. Fat and his cousin Boom show each other some gambling signals.

We start off by deciding who wants the Red Corner and who wants Blue. Someone will call out the odds, like 5-4, 3-2, something like that. The guy who announces the odds is what we call the "Big Legs." He's always a rich guy, and always well known.

Now, the Big Legs will call the odds depending on how the rounds go and who is winning. The odds will change nearly every round. It's difficult to explain how odds are determined, and often you'll look around the stadium and see the other Big Legs calling out different odds for their own section of gamblers.

I'd like to be a Big Legs someday. You have to do time in the local gambling community, probably at least five years. You also need money. The Big Legs are basically "the house;" you need to bring at least 200,000 baht (US $6,250) in cash to each fight as your starting sum.

I pretty much never see foreigners gambling in Bangkok. Foreigners only seem to know Muay Thai as an art; they don't understand it as a professional business for gamblers. Sure, I love Muay Thai, but I love gambling more than the sport. I can't imagine foreigners being able to break into gambling simply because I doubt they'd be interested in the business aspect of Muay Thai, or that they'd want to spend the kind of time needed to learn the gambling system. 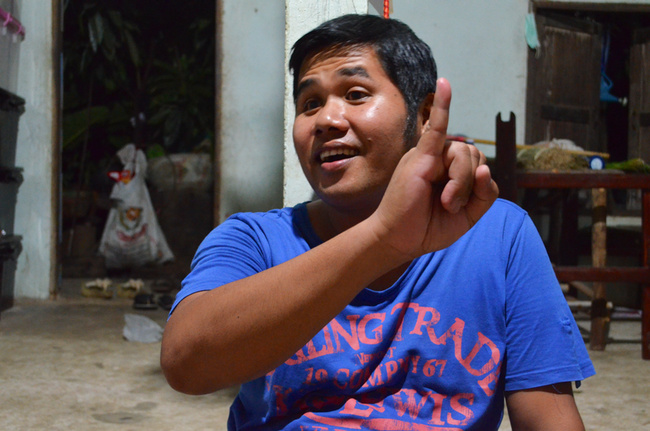 Thai women in gambling, well that's another story. There are tons of female gamblers all over the place, but they're mostly in the smaller cities and the countryside, not so much in Bangkok. But let me tell you, the women are just as good at gambling as the men.

Female fighters, on the other hand… Well, I don't bet on female fighters when I'm in Bangkok. Most serious gamblers I know usually don't bet on women because they just don't fight enough. I'll see a particular woman fight maybe once or twice, and then never again. Since I can't follow their careers, I don't feel confident betting on them. I do my research when I can, but if someone's an unknown entity, I'm not going to take that chance.

I don't ever bet on an unknown entity. I read all the Muay Thai magazines, like Muay Siam and Muay Champ, and I follow the fighters and their careers. I'm not big on technical fighters; I don't value beautiful technique as much as forward-moving aggressiveness. Also, I look for hard fighters, and by that I mean conditioned fighters who can check a hard kick and not even flinch.

My favorite age group is 23 to 24. At that age, they've probably been training in Bangkok since they were 17 or 18, so they've had a few years to get their shit together and make a name for themselves in the capital. I don't bet on kid fighters because they're too young, too much of a wild card.

All things being equal, I like to put my money on Isaan fighters, simply because I think they're tough, and because I grew up in Isaan. I guess it's a bit of regional pride. I also have local gyms I favor. But hell, I'll bet on anyone I think will win. 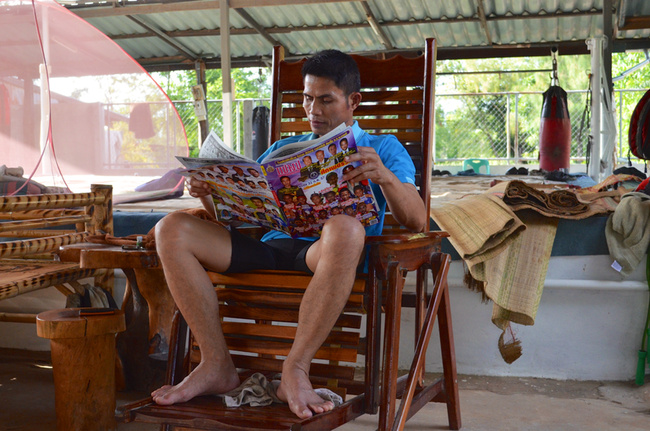 Gym owner Dit reading one of the stats magazines.

People always ask, "How do you know they'll pay you?"

Well, this community is strong and we all know each other, so it's self-policing. I've never had a knife or anything pulled on me, nothing crazy like that. It's pretty safe to gamble, at least physically safe. The only real danger is losing all your money, which can happen if you're unlucky, or just stupid. The smart ones, though, can put a bet on Blue and also on Red, and still walk away ahead because they know how to play the game.

I'd love to use gambling to take care of my family, but I realize it's just a dream. Everyone comes into the stadium wanting to win on every fight, but that's never how it happens, of course. At the end of the day, everything is 50-50.

But things like that are rare. It's hard to make a decent living as a gambler, no matter how much research you do. I have a wife and a new child now, so I've had to find more stable work at the local Toyota dealership. I still gamble, though. My wife is generally okay with it. If I come home with money, she's happy. But if she knows I lost a lot that night, the door is locked when I get home.

My wife gambles too, though. Not on Muay Thai, but on the underground lottery. It's not exactly legal, but the police are paid to look the other way. It's like the legal lottery that you'll see on the streets, but the tickets are cheaper and the odds are better because you don't need as many numbers to win.

I don't like the way she gambles. At least Muay Thai is 50-50, and you can research the fighters first. I think what my wife does is wrong. She puts down thousands of baht a month on those lottery numbers, leaves it all up to chance. I would never lock the door on her though, when she loses. She would kill me. 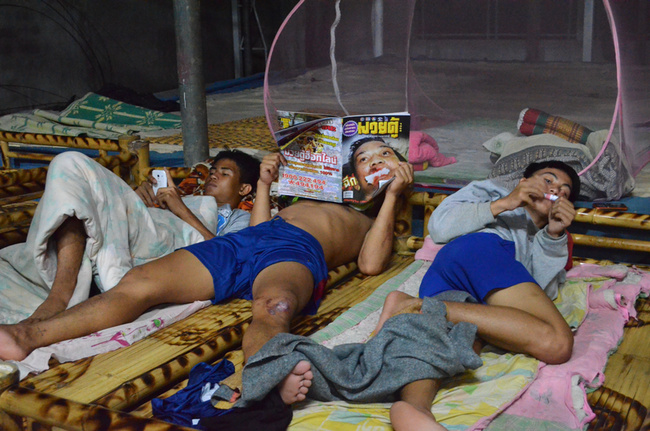 Special thanks to Boom and Frances Watthanaya for help with interpretation.