Conor McGregor and the Art of the New-School Call-Out 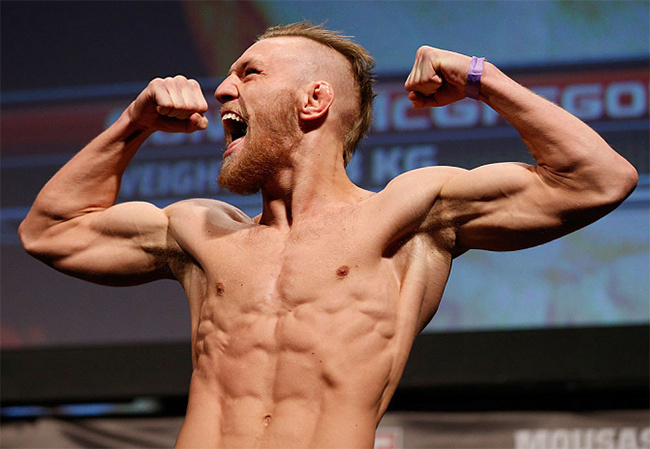 In fact there’s been something of an epidemic of fighters calling out Conor McGregor or responding to being called out by Conor McGregor in recent weeks, surprising considering the guy has exactly one UFC fight to his name. On April 29, both Cub Swanson and Dustin Poirier, two of the best and most-established fighters in the featherweight division, went round and round with McGregor on Twitter for an evening. McGregor sent out a feeler first, saying he’d like Dana White to line up Poirier and Swanson for him, which prompted Swanson to reply that though he liked the Irishman’s “spunk” he believed his own skills and those of Poirier’s would be too much for McGregor, “still a baby in this sport,”  to handle. McGregor, of course, disagreed. “You’d be lucky to escape the first,” he wrote.

All in all it was the kind of good-natured social-media ribbing that has helped the UFC differentiate itself as a marketing force from all other sports, capped off by Poirier in a memorable walk-on performance: “I don’t even know who this guy is …”

Then there was the curious case of Conor McGregor and Northern Irish lightweight Norman Parke. See, McGregor enjoys walking out to the cage wrapped in the flag of the Republic of Ireland, Parke in the flag of his native Northern Ireland. The Republic of Ireland and Northern Ireland have a rather long nasty history. So when Dublin native McGregor went on The MMA Hour and called out Parke after beating brimage, his words were heavy with historical baggage:

“If an MMA site said I was UK fighter Conor McGregor, which does happen, I would write to them, 'I’m actually Irish.' I would write something like that, whereas [Parke] considers himself British, so when people say he’s Irish he should come on and say, ‘No, actually I’m British.’ Maybe he should do that. That would be one thing: Have respect for where you’re from.”

Parke responded the way you’d expect a man who’d been raised in an environment of constant religious and sectarian strife would respond: with extreme caution and suspicion.

Flash forward to yesterday and you get this, the latest chapter in the extremely short and exceedingly strange UFC life of Conor Mcgregor:

That's Swedish featherweight Akira Corassani challenging McGregor to a fight in Boston in August via homemade YouTube video. Countering McGregor’s dapper bowties with his own jaunty fedora, Corassani holds up a crudely rendered contract and signs it in marker, “to let people know I’m for real.” (Check “yes” or “no.”) Corassani then gives McGregor 48 hours to respond to his challenge--preferably via Twitter, of course.

With the UFC’s policy of encouraging their fighters to lead active lives on social media, and with the proliferation of homespun videos and basement blogs, the art of the call-out in MMA has reached a level of shambolic populism that blends the sophistication of high technology with all the charm of a grade-school courtship. Mirroring the sport’s rapid technical and aesthetic evolution and its spirit of "fuck it" improvisation, the Twitter/YouTube/blog call-outs are another example of mixed martial arts securing its reputation as the sport best able to adapt to the world. For every Jon Jones pushing the boundaries of the sport with spinning elbows inside the cage there’s an Akira Corassani using the tools of an increasingly democratic and unregulated world to make his name outside the cage. These days MMA fighters are like kids at play in a world of their generation’s making, using new toys to make their careers and secure themselves a little taste of the spotlight. The two phenomena--MMA and social media--are growing up together.

As Uncensored as It Gets