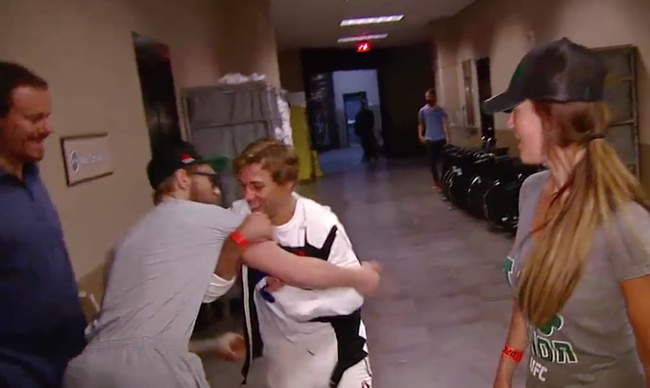 Following what most fans have already deemed the greatest night of mixed martial arts ever, the UFC has announced its picks for the next two coaches of its reality show, The Ultimate Fighter: U.S. vs. Europe. The twenty-second version of the series will feature sixteen lightweight hopefuls, which is interesting because Conor has been talking about moving up a weight class for a while.

These choices may come as a surprise to some fans, but we all saw glimpses of a budding rivalry between Conor McGregor’s Straight Blast Gym, and UFC 189’s last-minute replacement Chad Mendes’ Team Alpha Male.

Chad and Conor exchanged some pretty heated words during their pre-fight media obligations, but the most intriguing bit of conflict was caused by the main alpha male of Team Alpha Male, Urijah Faber, when he created a playful altercation with Conor backstage of the weigh-ins last Thursday.

Past dueling coaches have included Fabricio Werdum and Cain Velasquez, B.J. Penn and Frankie Edgar, and Ronda Rousey and Miesha Tate. The new season could happen as soon as next year.