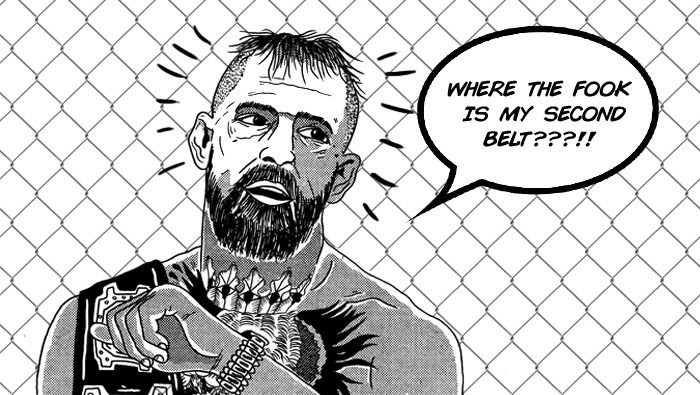 Conor McGregor was annoyed. He resembled a man whose blood sugar was plummeting and heard the kitchen forgot to fill his order. He wasn't wearing the look of a man satisfied with the history he'd made, and it was because of something else he wasn't wearing. "Where the fuck is my second belt?" McGregor shouted into Joe Rogan's microphone. "I’ve already got this one [around my waist]. Where’s the second one at? Cheap motherfuckers—four-point-two billion this company was sold for. Where’s that second belt? Go backstage and grab that fucking belt somewhere."

The interview got a little further before the absence of a second piece of gold returned to the fore. "Look, what’s next for me, Joe—I wanna get that second belt, where the fuck is it? They should’ve had them two belts ready, spit-shined for me."

McGregor had just done the unprecedented in the main event of UFC 205, the promotion’s debut at Madison Square Garden: he won the lightweight title and, as the incumbent featherweight champion, became the promotion's first fighter to hold championships in two divisions at once. He did it by knocking down former lightweight king Eddie Alvarez over and over, putting him on the canvas for good with a four-punch combo in the second round. There was nothing flukey or controversial about the finish, no case for a lucky punch or for benefiting from an opponent rolling in with an abbreviated training camp. McGregor made one of MMA's last remaining first ascents with flair and devastation, and he was livid that the optics didn't match his vision of the moment: a belt hanging off each shoulder.

Of all the things the UFC staff could have botched on Saturday night, this was a big one. A belt signals significance, but two belts on the same fighter are without parallel. Forgetting the extra hardware was either an enormous mistake or a petty gesture aimed at undermining a pay-per-view king who, at the post-fight presser, demanded an equity share in the UFC. McGregor has more power than any other fighter in the sport: he has two divisions at his beck and call, a million-dollar history in a third, and he's only grown more brazen the more he finds out how much money he actually makes for the company.

"I’ve ridiculed everyone on the roster," he said, deep into his post-fight interview with Rogan, "and I just wanna take this chance to apologize—to absolutely nobody! The dual champ does what the fuck he wants!"

Mid-rant, UFC president Dana White sidled up and slipped him the second belt. 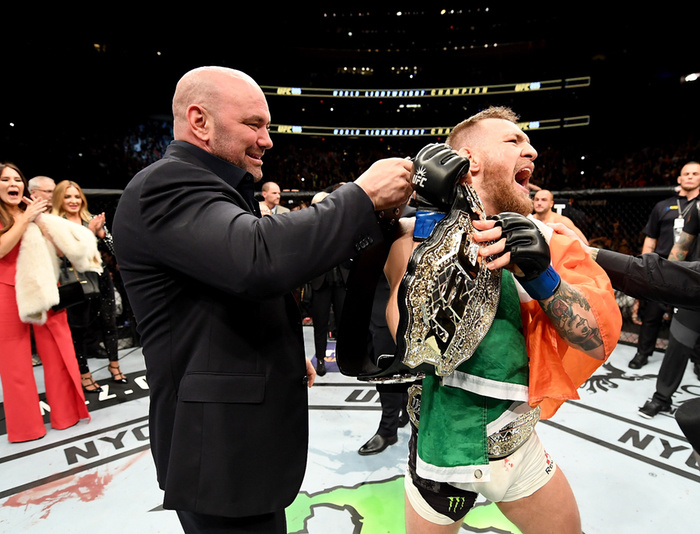 It was a loan from Tyron Woodley, the welterweight champion who'd retained his strap with a controversial majority draw with Stephen Thompson at UFC 205. That Woodley would make a temporary donation in service of fulfilling the vision of McGregor, who sowed the seeds another rivalry in another division by freaking out at Woodley for no apparent reason in the lead-up to fight night, shows his good character if not necessarily his happiness.

"I'm a professional at the end of the day, and it's obvious that the majority of the crowd is here to see Conor McGregor," Woodley said after the fight. "He's built this mystique about himself that everybody wants to watch him fight and watch his antics, so it's silly for me to go out there and try to turn the crowd on my side when I know 99.9 percent of the people were here to either watch Conor win or lose."

At the post-fight press conference, White said the belt lapse was Conor's fault. "Just for the record, I’m not supposed to bring his belt," White said. "He’s supposed to bring his belt. He’s yelling at me because I don’t have his belt. I’m like, 'No, you’re supposed to bring your belt.' I give you the new belt." That seems like a pretty important detail to not lock down ahead of time, but okay. (It wouldn’t be the first high-profile misstep of the weekend: White said the appearance of Ronda Rousey's tantrum-y exit after a staredown with Amanda Nunes at the UFC 205 weigh-ins was a production team error.)

Give it a year and this backstory will be forgotten, but the images of White's delivery and McGregor slinging two belts over his shoulders will survive. "This is what I dreamed into reality," he told Rogan. It only took a few punches and a scavenger hunt to make it so.

How Conor McGregor Killed Another King