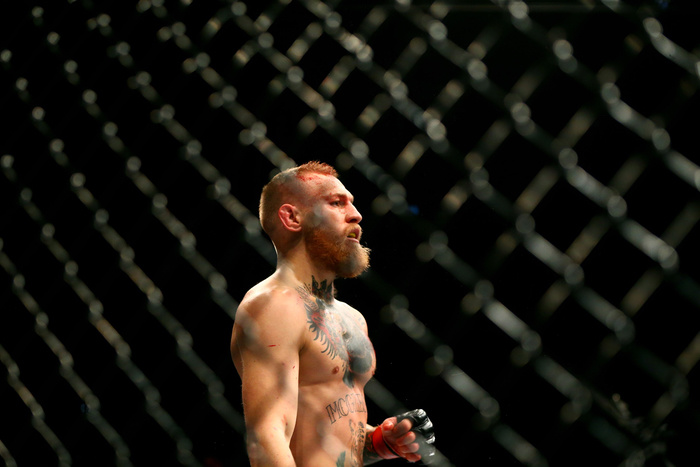 Conor McGregor really wants you to believe that he's angry at WWE. Maybe at its fans, but definitely at its wrestlers. The Irishman was set to be the next big thing in MMA after Ronda Rousey lost her title and her spark—until, of course, he lost to Nate Diaz after jumping weight classes. McGregor has been working on his next move ever since, loudly if a little less loudly than usual.

Part of that, apparently, involves McGregor calling the WWE roster a bunch of "pussies", before taking to Twitter to state that 1) it wasn't the average wrestling fan he had beef with, but 2) that he really would kick the hell out of any wrestler he matched up with. Since Twitter is the home of weirdos, irony addicts, the meme-damaged, and keyboard badasses of all stripes, it only makes sense that a postmodern gentleman fighter of UFC's golden age would double down there, 140 PR-overseen characters at a time.

Wrestlers were incensed, of course, though how much was artifice and how much was real is impossible to parse. The responses ranged from the sublime: 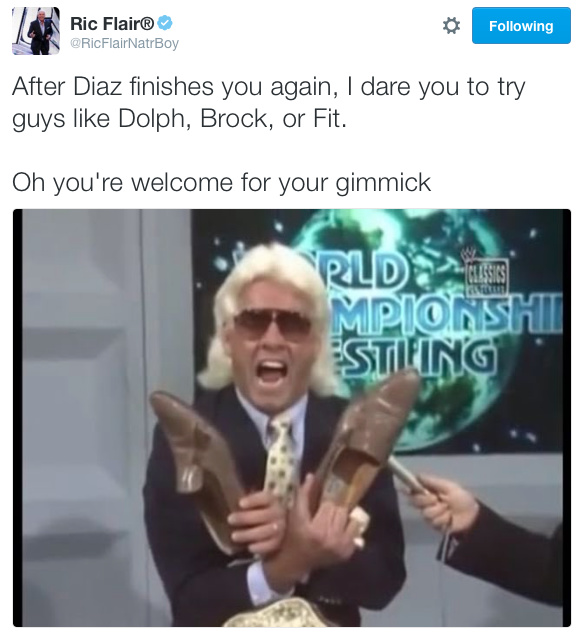 The spoiler, of course, is that this is all a work, and remains so despite the handful of pro wrestlers who take McGregor's shit-talk seriously. McGregor's hyping himself and a possible future WWE appearance every bit as much as Flair showing off his alligator shoes, Jericho telling the crowds to shut the hell up, or Reigns doing that weird arm cock thing. The wrestlers chomping on this bait do so because the game is played on a hazy field, where you have to believe, at least a little bit, that it's all more real than not. But they're not the only ones: UFC lives in a world tinged by a bit of fairy magic make-believe, too. If McGregor seems custom-built for WWE-style shenanigans, the bulk of the credit has to go to his extremely large personality. But the lessons of his former workplace sure don't hurt.

It's easy to forget, but two decades ago, UFC was far closer to pro wrestling's cartoon reality than not. Today, it's serious business, a comparatively buttoned-up, nu-corporate quest for respectability featuring branded black tights, big buyrates, and multimedia stars. Once upon a time, however, it was defined by mustachioed ninjas, sallow-chested karate masters fighting burned-out sumos, and dominance by a clan of diminutive Brazilian jiu-jitsu masters who ended up opening a global chain of stripmall self-defense dojos. For lack of a better term, old-school UFC was fucking weird. It modeled itself on Street Fighter II.

No wonder crossover between UFC and WWE got started early, and barely slowed as time went on. There was Ken Shamrock, blown up to impossible proportions, screaming his head off because he couldn't cut a promo in a normal voice. He was followed by Dan Severn, a Freddie Mercury lookalike with a soft voice, willing and able to make a kayfabe armbar look like he was going to rip an arm out of its socket.

Ronda Rousey showed up at Wrestlemania 31, flipped Triple H and promptly disappeared, with only the promise of a return left behind. Brock Lesnar quit wrestling, went to UFC, won gold, nearly died, came back to WWE, then went to UFC for a steroid-fueled one off with WWE's sanction. CM Punk, retired from pro wrestling, is now lashed to UFC in a make-or-break bid for non-wrestling stardom.

Lesnar's recent match is the most instructive in trying to figure out the strange and symbiotic relationship between the two promotions. In an instant, his credibility as both a UFC boogeyman and WWE's largest, meanest draw could've been destroyed by a loss. McMahon risked it because he needs UFC, and because UFC needs pro wrestling.

And this is why they call it "the beautiful game." Photo by Joshua Dahl-USA TODAY Sports

The dirtiest secret in pro wrestling is that its most successful proponent and resident overlord, Vincent McMahon, hates it. It's why he leaned on celebrities to hedge his gamble on the first Wrestlemania when Hulk Hogan, one of the biggest stars in the world, was fully capable of managing the burden. It's why he fastidiously avoids the words "wrestling" and "wrestler", opting for "sports entertainment" and "superstar." His thirst for mainstream legitimacy isn't enough to get him to drop the carny act, but can bring him to sink millions of the family fortune—money made on the fake sport he so disdains—into Linda McMahon's doomed Republican Senate campaigns.

The legitimacy and realness McMahon craves can be found in spades in MMA. And MMA stars need only look across the divide to see in pro wrestling what they lack in their own sport: longevity and fame. Reality is a fine thing—or, anyway, a non-negotiable one—and UFC stars make big money, but they're not able to parlay that into hosting the ESPYs, as John Cena did, or into a truly huge movie career, a la the Rock. They must see Undertaker still getting big paydays at 50, or Triple H and Shawn Michaels remaining relevant to the business well into their 40s, and wonder just what they'll do once they're done at 38. That's without squinting and peering deeply into UFC, and realizing that pro wrestling probably didn't look much different in 1915 than MMA does now: increasingly showy, with a whiff that something is not quite what it seems, even as the whole thing hasn't hit the realm of scripted television drama just yet.

This is how it has been for a long time. Pro wrestling and MMA orbit one another, tugging at each other, sometimes strongly and sometimes less so. You can see it in the way Japan blurs the lines between real and false by leaning on MMA language and styles to obfuscate what's actually happening. There are also the tales that Paul Heyman, upon selling ECW and joining WWE, wanted to launch a show centering on a worked shoot—read: fake but heavily underpinned by reality—style of wrestling cribbed from UFC.

Given all that, it only makes sense for Conor McGregor to throw his name out there. He's one of many, following a line of high-profile strongmen and raconteurs stretching all the way back to the circus shoot fighters who bilked the audience, using shoot-fight reality as a chip for fame in pro wrestling's quasi-reality. Like those who came before, McGregor will move from one seedy, carny world to the next, and maybe back again. Just don't ask if it's real.