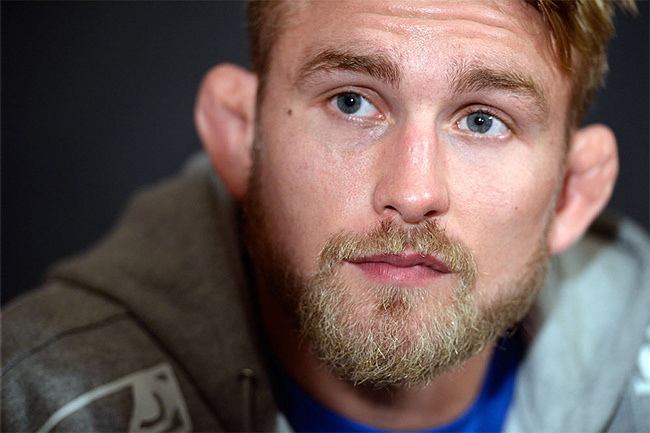 We’re now less than one week away from perhaps the most important election of our lifetime, and as with all elections our choice in candidates says much more about us than it does them.

Because on paper there’s nothing wrong and everything right with Georges St-Pierre and Alexander Gustafsson, the finalists in the UFC Cover Vote, an eight-round tournament in which UFC fans get to choose which fighter will join light heavyweight champion Jon Jones on the cover of the next EA Sports UFC video game. After his victory over Johny Hendricks two weeks ago, GSP is now the winningest fighter in the UFC. He’s also the promotion’s longest-running champion, biggest money-maker, and most famous man. GSP is the UFC and the UFC is GSP, and if ever a man deserved to be on the cover of a video game, it’s him.

Then there’s Gustafsson, who, though far shorter on accomplishments than GSP, is still a brilliant fighter with a bright future, the first man to give Jon Jones a real challenge, and the new face of European MMA. GSP may be the present but Alexander Gustafsson is the future, and if ever a man deserved to be on the cover of a video game, it’s him.

Still, I have to say that I’m a little disappointed in us. Given the 16 fighters we were allowed to choose from, the fact that GSP and Gustafsson made it to the finals indicates a depressing lack of imagination in the UFC voting public.

GSP is the easiest of all possible choices. Like Hillary Clinton in 2008, there’s an air of inevitability about him, like he’s the heir to a throne. GSP, like Clinton before him, is the guy with the big money and the big name and the well-oiled promotional machine behind him—the easy choice and the fine choice but the dull one. And all it takes is one Barack Obama-like transformational figure to come along and shake up all the inevitable candidate’s well-laid plans.

Unfortunately Alexander Gustafsson is no Barack Obama. True, he represents the next generation of MMA, and his nationality and skillset make him transformational in his own way, but at the same time he may be perhaps an even more conservative choice than GSP. Because at least any rivalry between GSP and Jones exists entirely in the realm of the theoretical. Their battleground will never be the Octagon; instead, they’ll have to fight it out in the minds of MMA fans and the forever-shifting determinations of posterity. Their clash is a fantasy. Alexander Gustafsson, on the other hand, is actually Jon Jones’ rival. Their fight back in September was the first indication that Jones was actually a human being, capable of real weakness, so Gustafsson is the more obvious, probably the most obvious, choice for fans voting for candidates to stand next to the champion on a video game box.

But a Gustafsson victory would betray an unfortunate literalism and dishearetening shortsightedness in MMA fans. I don't understand: In the entirely imaginary world of video game wars, why shouldn’t we give voice to our wildest notions and wings to our most impossible dreams? What, we can spend an entire Sunday afternoon arguing about pound-for-pound lists, dreaming about fights between Jose Aldo and Fedor Emelianenko, but when it comes time to make the all-too-important decision to decorate a video game box, we all become literalists? Where’s the fun in that? Why did we let Anthony Pettis fall to GSP in round 3 when Pettis is, like Jon Jones, the real future of the UFC? Why didn’t flyweight champion Demetrious Johnson even make it out of the first round? Is it because he isn’t deserving or is it because we, as educated MMA fans, couldn’t abide the visual: a light heavyweight squaring off with a 125-pounder? That it would have looked too ridiculous or given weight to a fantasy world too impossible to imagine? And why did Miesha Tate lose in round 2 to Gustafsson? She’s just as big a name as the Swede, and surely if there was one giant leap forward for the UFC this year it wasn’t the rise of a Scandinavian contender but rather the advent of a women’s division. How much more momentous would it have been if Tate had made the cover alongside Jones in the same year women finally made it to the UFC?

It seems to me that in our age of fantasy sports leagues, fan-published sports blogs, and Internet voting, the time was ripe for a truly fascinating and revolutionary move in the world of video game box cover ornamentation, and we MMA fans blew it. We had the chance to do something interesting and we took the safe road instead.

Shame on us, I say. Shame indeed.