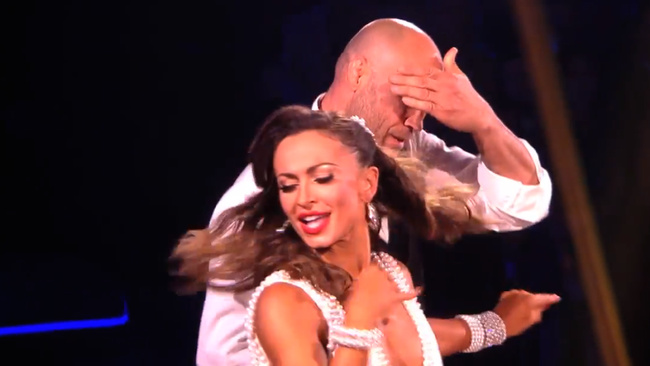 UFC legend/ Hall of Famer and burgeoning action star Randy Couture took the world of televised dance competition by storm on Monday night when he performed one hell of an assured and charismatic foxtrot with his partner Karina Smirnoff on the premiere episode of the nineteenth season of Dancing With The Stars.

Couture’s extremely competent performance probably shouldn’t come as that much of a shock to anyone who’s followed his storied career in MMA. A world class athlete with that kind of background in wrestling and boxing is bound to have some skill in the areas of coordination and footwork, after all. For the uninitiated, though, Randy’s Ali-meets-Astaire dance was a revelation for two reasons:

1.  Most dance and reality TV fans probably still think of mixed martial arts as a giant, no-holds-barred human cockfighting ring in which monosyllabic dudebros in t-shirts with chains and skulls all over them cheer on other monosyllabic dudebros who randomly hit each other with very little technique or finesse.

2.  Dancing With The Stars’ first introduction to MMA was a fairly sloppy affair that didn’t do a whole lot to dispel those stereotypes.

Five years and ten(!) seasons ago, you see, Couture’s fellow UFC legend and former rival, Chuck Liddell, became the first mixed martial artist to compete on Dancing With The Stars. Although he charmed the judges and viewers with his awkward semi-enthusiasm, he didn’t exactly leave the best impression with his efforts.

To really appreciate how surprising Couture’s performance was for non-UFC people, let’s take a moment to pit the pair’s foxtrots against each other. I like to think of this contest as Liddell vs Couture 4.

If you had any remaining doubts about the lack of intersection between the worlds of DWTS and UFC, Tom Bergeron’s pronunciation of Wanderlai Silva should put them to rest.

After informing us that Chuck’s last victory came over some guy name Wand-ur-lay “The Axe Murderer” Silva, the show gives us a brief overview of Liddell’s training camp with his pro partner, Anna Trebunskaya. Anna spends a lot of time emphasizing how scary and dangerous Chuck is. Chuck spends some time beating on a heavy bag and a lot of time beating on his choreography. He also punches a window while wearing what I can only assume are his formal four ounce gloves.

The dance itself is pretty much exactly what you’d expect after watching the intro package. Chuck seems amiable enough throughout, but he never fully commits to the dance. There’s a stiffness, a (dare I say?) Iceman-like quality to his whole demeanor as he stomps through his basic footwork and tosses his partner around in a way that was probably meant to capitalize on his manly strength but really only emphasizes how hopeless an Eliza Doolittle Chuck is to Anna’s Henry Higgins.

The whole spectacle looks like one of Liddell’s famous flurries of haymakers minus the conviction and potentcy. Or like the “Puttin’ On The Ritz” scene from Young Frankenstein.

Even if it’s technically terrible, though, it’s not without its charms. Chuck maintains a goofily earnest smile throughout the performance, and the judges really do their best to let him down easily. They damn him with a lot of faint praise before going to town on his footwork and timing, but you get the sense that they’re pulling for him. Even if they have to give him a measly but accurate 16/30 score.

Chuck and Anna survived for a number of weeks before being eliminated 5th on October 13, 2009. Noted singer/ Mormon and the best ever Joseph to don the Amazing Technicolor Dreamcoat, Donny Osmond, went on to win that season.

Randy’s intro begins a lot like Chuck’s, emphasizing his macho-ness and initial clumsiness with the steps, but that’s where the similarity ends. On the dance floor, Couture is what Liddell might have looked like with a little more skill and a lot less self-consciousness. Throwing himself into the role with a big movie star smile, Randy navigates a fairly complicated choreography (certainly more complex than Chuck’s) with a champion fighter’s knack for precision and attention to detail. His dips are assured graceful, and downright sexy if that’s your kind of thing. All together, Couture and Smirnoff’s performance is a genuinely lovely affair that recalls the less silly parts of Steve Martin and Gilda Radner’s famous Dancing In The Dark skit from SNL, even if some of Randy’s “lines” as the DWTS kids call them, are a little lumbering or Young Frankenstein-y.

The dance gives all four of the judges the vapors. Most of their analysis is a breathless and rambling jumble of giggles and lactation jokes, but they do manage to sneak in the occasional kind word about his footwork and actual skill, as well as some fascinating tips about shoulder placement that should help him look even less hulking in future episodes.

Once the judges were done swooning like extras in Bye Bye Birdie, they awarded Randy and Karina a  31/40 for their dance. The pair easily made it through to the next round on last night’s results show. Randy also earned an enthusiastic hug from his fellow dancing star, Tommy Chong, for his efforts.

In other words, Randy Couture's foxtrot quite effortlessly and obviously defeated Chuck Liddell’s. We might even go so far as to call it a technical knockout. Does that mean that they’re officially even now?