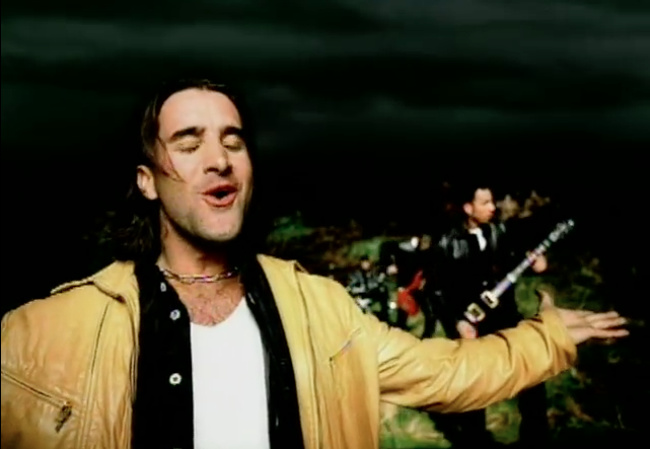 The trailer for Creed, the new film from the Rocky-verse that focuses on Apollo Creed’s son, inspired a generally positive reaction when it debuted on June 30. And rightfully so. There’s a lot of promise packed into the trailer’s 2:44 running time: Michael B. Jordan (Fruitvale Station, The Wire, Fantastic Four), who plays the titular character, continues to be one of the best and most charismatic actors of his generation. The training scenes appear to be choreographed by people who understand basic boxing concepts like the difference between orthodox and southpaw stances (which is more than we can currently say about Southpaw). And Sylvester Stallone is also there, being Rocky again.

But there is one demographic that isn’t quite willing to accept the Creed movie with arms wide open: fans of the band Creed. As AUX and FACTMag reported earlier today, a Change.org user named Nick Robinson has started a petition which urges MGM Studios to change the name of the boxing film because he’s concerned that its current title will harm the ability of the “Creedmunity” to discuss their beloved band’s mix of pseudo-Pearl Jam grunge and Christian rock.

“The movie CREED about the son of Rocky Balboa's deceased trainer's son, is making it difficult, if not impossible, for the still-vital online Creed fanbase to exchange thoughts and discussion regarding band developments, song interpretation, rumors, non-erotic fanfiction, and deeper insights into the expanded Creed universe. MGM has completely disrespected the Creedmunity by using the name of the still-popular band for their non-Creed related movie and have been stifling conversation by flooding social media hashtags and searches with non-music Creed discussion. MGM should have consulted Creed experts and online leaders before titling this movie. The Creedmunity will not be silenced,” Robinson writes.

Lest you think that he’s overreacting, the confusion has already started!

To prevent this madness from going any further, he also provides a helpful list of alternative titles for the film:

“• Rocky's Creed
• Boxer Creed
• Son of Creed (although, this was the title of a rare 2002 leak of studio demos, the title was never officially used by the band, and thus is not considered canon)
• Apollo Creed's Son
• Rocky: Son of Creed (while this makes it look like it's a reveal that Rocky was Creed's son, this is just an idea and MGM's marketing department can make it work somehow)
• Rocky: The Next Generation Creed (not the band)”

And goes on to imply that, if MGM fails to listen to the concerns of the Creedmunity, they will basically be creating their own prison in which no Creed (the band) fan will ever considering seeing Creed (not the band): “I can guarantee that if MGM does NOT change the title that no self-respecting Creed fan will EVER see this movie, not even on bootleg!!!!!!!!!!”

Although Robinson clearly wrote this petition with his tongue somewhere in the general vicinity of his cheek and most of the current signees appear to be responding in kind (the Community-inspired Creedmunity graphic is particularly inspired), I can assure you, as a music writer who has been on the receiving end of Creed fans’ wrath, that his tone is eerily realistic. And there’s a very good chance that the actual Creed fans could embrace the cause and take this fledgling petition higher at any moment.

Creed is scheduled to open on November 25. If you are a member of the Creedmunity, or simply an ally who wants to help Creed (the band) fans enjoy their non-erotic Scott Stapp/ Trish Stratus fan fiction and “What’s This Life For?” lyrical analysis safe from the online hype that is starting to surround the film, you can sign you name to “Change the name of the movie Creed” here.

Watch the Trailer for the 7th Rocky Film