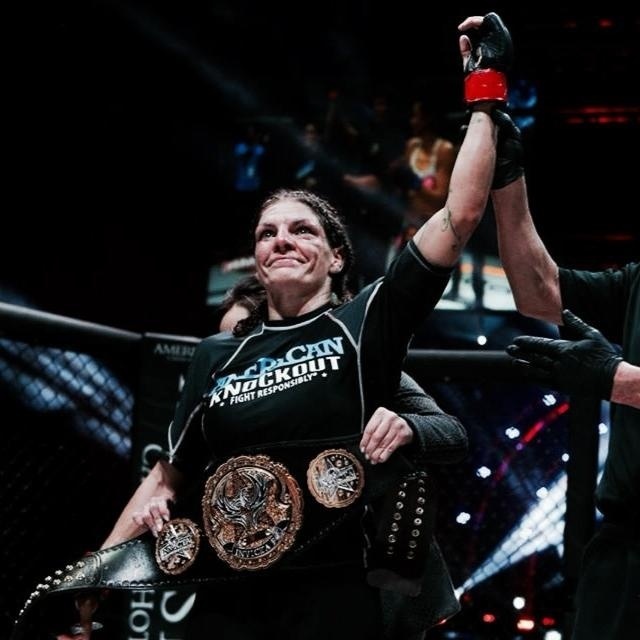 When I saw the news the other day that Cris "Cyborg" Justino was kicking around the idea of trying to get down to 135 pounds so that she could fight Ronda Rousey, I filed the information away in the back of my mind along with all the other stuff that is occasionally fun to consider but silly to hope for or expect, and went about my day.

Yesterday morning, though, I woke up to my Internet exploding. I saw lots of articles titled things like “Cris Cyborg plans to drop to 135 and retire Ronda Rousey” and “Cris Cyborg calls out Ronda Rousey ‘I’ll kick your ass at 135’” and I thought it was all just more of the same as what we’d heard a few days back. Then I saw a different title, one that contained a piece of pertinent information missing from the headlines of the rest. “Cris Cyborg plans to challenge Lauren Murphy at 135 in the summer, then Ronda Rousey in December.”

I scared the shit out of my dog leaping out of bed to run for my phone. Lauren has been one of my best friends since we were teenagers. I was there when she was in and out of rehab, hospitals and jail, when she randomly tried jiu-jitsu a few years ago though she had no athletic background at all, when she proceeded to beat everyone in our home state of Alaska, and when she won the inaugural Invicta bantamweight belt late last year. I contend that I retain the title ‘Lauren’s biggest fan’ despite the fact that her husband and her mom probably think it belongs to them (sorry, Joe and Jenni).

Lauren has fought for Invicta twice on the same card as Cris and because I’ve never yet missed one of Lauren’s fights, I have twice seen Cris fight in person as well. As you can imagine, she is fucking terrifying. I’ve never seen any human be so scary, so devastating, and yet so humble, kind and soft-spoken. Aside from Lauren, Cris would have to be my favorite female fighter, or at least she was until yesterday morning, when I found out she'd challenged my best friend. In order to adhere to her doctor’s advice, Cyborg said her plan is to fight only three times at 135: “First, to win the Invicta belt, the second time to kick your [Ronda’s] ass, and the third time to kick your ass again so that the world can see it wasn’t luck.”

I've had so many conflicting reactions since hearing this news I can’t even sort them all out. I can only say that not a single one of them has been positive. I imagine the inside of my head looks like one of those industrial strength trash compactors down in the basement at malls. It’s making similar noises, too.

I’m freaked out because Cyborg scares the fuck out of me and I’ve always been thankful that she and Lauren weren’t in the same weight class. I know that Lauren isn't scared to fight Cyborg. As a friend, I guess I shouldn't worry at all. Can she win? Absolutely no question. Lauren is tough as hell, well-rounded, has the heart of a lion, and is as strong as an ox. Kaitlin Young recently said in an interview that Lauren has been her toughest opponent so far because her movement is so unorthodox that she is very hard to time. All of this means that if Cyborg thinks she can walk through my friend, she has another thing coming. But dear god it almost killed me to watch Lauren fight Kaitlin, Sarah D’Alelio, and Miriam Nakamoto, each a more frightening opponent than the last. If she has to fight Cyborg, someone is going to have to carry me out of the stands on a stretcher.


My devotion to Cris as a fan has really been rocked by all this. Obviously in part because she wants to beat up my best friend, which I understand comes with the job, but also because she's being so presumptuous. She presumes Lauren can't stop her, that Lauren is just a speed bump on the way to Ronda. She presumes to cut in front of the women currently at 135 already waiting to challenge Lauren for the belt, and to do so without having to fight in a contendership fight first. She presumes that she can drop down a weight class and fight for the Invicta bantamweight belt before defending the featherweight belt she already has at least once. Then she presumes that Invicta will hand her over to the UFC, that the UFC will take her with only one fight at 135 on her record, and that they’ll give her an immediate shot at the title in the bantamweight division ahead of all the women who’ve put in their time.

That isn’t how it works, or shouldn’t be at least, even if you are arguably the baddest woman on earth. Jose Aldo has beaten pretty much everyone in the featherweight division. Did he toss around the idea of dropping down a weight class to beat up the smaller guys? Of course not. He talked about going up a weight class to fight the larger guys in order to challenge himself. Dropping down a weight class is what you do when you can’t manage to beat the people at in the class in which you already compete. So if Cryborg's intent is not to sweep a smaller division as well, but is just to get at Ronda Rousey, what does the Invicta 135 champion--my best friend--have to do with anything?

I realize that half the people reading this might call me out for being biased and presenting all these irrelevant arguments for why my friend shouldn’t have to face Cris Cyborg because I don’t want her to lose. To clarify, I think Lauren is in fact a pretty bad matchup for Cris because of her wrestling and extremely strong top control. I also don't think Cris can knock Lauren out, nor do I think she can avoid Lauren getting the fight to the ground. Whoever Invicta puts in front of Lauren is who Lauren should fight, and I whole-heartedly agree with that stance, but within reason. Allowing Cris to drop to 135 to challenge for a belt Cris has already admitted she never plans to defend, and then letting her move to the UFC to fight for another bantamweight belt she never plans to defend isn’t just bad for Lauren and me. It’s bad for Alexis Davis, who won last night and damn well deserves a title shot in the UFC. It’s bad for Cat Zingano who damn well deserves one also, as soon as she is physically and emotionally healed up from her recent tragedies. It’s bad for India Gomes, who has more than proven that she could pose a legit risk to Cyborg at 145. It’s bad for both promotions and both divisions, not to mention it’s probably bad for Cyborg. I watched her strip naked behind the towel to make 145 the last time she fought. With or without doctors and specialists, 135 is not where she was ever meant to be.

I know that in the end, no matter the results of the fight (if it even happens), it will be a positive outcome for Lauren because she is the kind of person who won't allow it to be anything else. If she wins, she'll have beat Cyborg. If she loses, it won't be without putting up one hell of a fight. In either case, she will be able to use it as a platform to show the world that it wasn't a fluke that she became the champ. Every time she's ever fought, she's trained her ass off and shocked everyone. Perhaps I should try to remember that Cyborg is just a human instead of making her out to be so much more in my mind. Let her underestimate Lauren. We'll see how well that works out for her in the end.