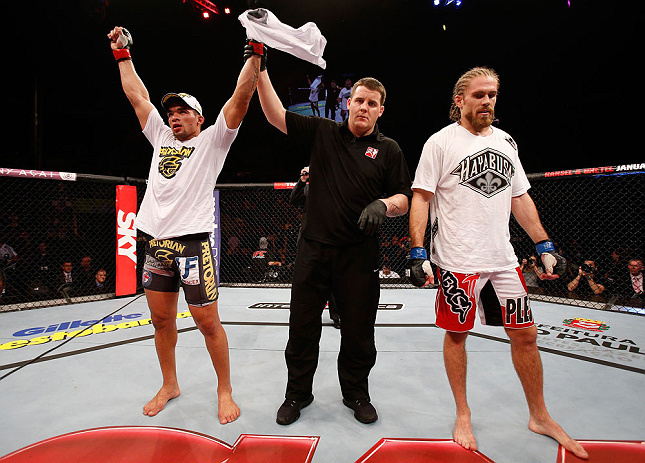 It was baffling. Craig had felt better prepared to face the Brazilian Ronny Markes than he ever had before a fight. He’d worked on his wrestling in Austin for months in preparation for the January 19 UFC on FX fight. But once the bell rang to open the fight, he fell into an old habit, a habit that turns one of his greatest strengths into a weakness.

“I have really good cardio, but I’ve just been afraid to use it until the very last round,” Craig says. It was a tendency that started back in his days with Legacy Fighting Championship in Texas when he started out slow against Bubba Bush in their April 2011 fight, ceding the first round to the Houston wrestler. But though he managed to outlast Bush and took him out with punches in the final seconds of their fight, the slow starts became a pattern.

“I think it was because for a while, that was how I practiced or got used to fighting because of my competition,” he says. “I don’t know if I started slow with Bush but he outwrestled me big-time. Next [Legacy] fight, it was the same thing, I got my back taken early.”

In his UFC debut against Kyle Noke Craig once again got his back taken early in the fight but went on to get the unanimous decision. Next, Rafael Natal beat him up in the first round before Craig conquered him with a head kick in the closing seconds of Round 2.

“It was always okay because I was able to come back in the second and third,” Craig says. “But [in the Markes fight], I just came back too late. It was a wake-up call as far as how to approach it from the opening bell.”

After the fight in Brazil, Craig wanted to cry, but instead he stood under the shower. The fight, all his mistakes, played in his head: I can’t believe I let this happen. He’d let down his fans, sure, and worse, his coaches and training partners. But mostly he’d let himself down. Still, after a few minutes he realized that losing for the first time wasn’t as painful as he thought it would be. Not receiving a second check for the win--that stung. But not getting his ass beat, not being knocked out or choked out or submitted–that softened the blow.

Craig emerged from the shower to a dour scene. For whatever reason, his locker room largely comprised defeated fighters–mostly Brazilians he couldn’t name. “It was like, ‘Oh look, another guy from our locker room lost,’” he says.

“We’ve got a pretty lighthearted locker room, so I think at first they were a little somber, walking on eggshells, but I think they quickly realized they couldn’t keep that up, and I couldn’t let them do that either,” Craig says. Finally, he cracked a joke at his own expense, and the relief was palpable.

That night, for the first time, Craig didn’t have a victory to celebrate. But he’d already planned to stay a week in Brazil after the fight, with a cousin who lives there acting as tour guide. There was no sense moping about the fight. Instead he spit his rudimentary Portuguese game at the beautiful girls of Brazil, hiked, hang-glided and binged at a churrascaria until he felt better.

“We ate so much, just terrible--meat just lodged in our colons,” Craig says. “Every cut of meat, chicken hearts, you name it. It was badass. You fill up your plate and then you weigh it. You pay by the weight. So we were having a pretty serious competition on how much actual poundage of food we ate.”

Still, the unanimous decision loss weighed on Craig, and that almost led him to another fuck-up. Hell-bent on not suffering back-to-back defeats and the likely cut from the UFC that would result, he rushed back into training 12 weeks out from his July 6 fight against Chris Leben. Of course, the more you train, the more susceptible to getting hurt you are, and Craig ended up tearing his MCL. This, coupled with a few other dings, limited his training to mostly boxing and hampered his cardio training, meaning Craig's victory over Leben was far from decisive. But it did feature his first strong start in years.

A Stranger in Strange Lands