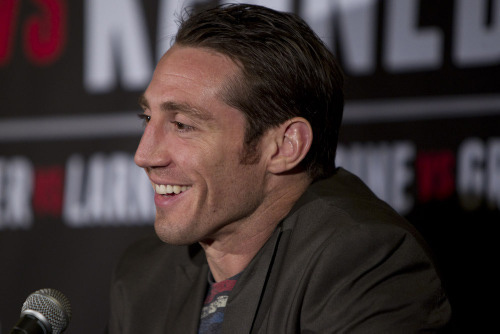 After 12 years as professional mixed martial artist, Tim Kennedy finally makes his UFC debut July 6 against jiu-jitsu savant Roger Gracie at UFC 162, but to hear him tell it, it’s just another fight.

“I’ve been fighting so long and for so many different promotions, ultimately all that matters is the dude standing across from me in the cage,” Kennedy says. “The shape of the cage, the color of the cage, if you’re in a ring, you know, those are all subtle nuances that I’m sure the fans appreciate. But anyone that’s been in a fight before, whether you’re fighting in a parking lot or fighting in a bar, it’s just a fight.”

Still, not every fight is created equal, and every fighting career has its moments of revelation, where things become clearer than they were before. Kennedy’s came with his very first loss, against Scott Smith at IFC: Warriors Challenge 15 in August 2001.

“Scott and I had fought like three and a half weeks before that, at the California Pancrase Championships, and I beat him,” he says. “So when they said, ‘Hey, you’re going to be fighting this cat at IFC,’ I was like, ‘Oh man, I just fought that guy. Cool. I’m excited.’ Their rematch took place at an Indian casino in the city of Oroville, located in the California Central Valley.

“Right off the bat, I closed the distance, threw an overhand right, pushed him up against the cage and threw a double-leg, turned the corner … I don’t remember exactly how, but he ended up in my guard and just blasted a bunch of punches," Kennedy says. He scrambled to sweep Smith or somehow get back to his feet but was unable, and the third or fourth punch got through. “It cut me wide open,” he says.

The ref stopped the fight and the ringside doctor quickly called it. He isn’t complaining about the stoppage now, but at the time, he was livid--at himself for his mistake, at the doctor for calling the fight, and at his own flesh for opening up. Kennedy says things took a surreal turn when he went backstage for medical treatment: “I had a really creepy Indian with a bone necklace stitch me up, with a cigarette hanging out of his mouth.” Kennedy still has the scar from the gash under his left eye.

The whole debacle served as a lesson, though. “I took it light,” he says. “I was like, ‘Oh, I’m gonna take him down, I’m gonna do whatever I want to.’ And he had the opposite mindset. He was like, ‘Dude, I already fought this guy. I need to go out there and blast him from the start. I don’t want to see the second, I don’t want to see the third round.’ He was in the right mind-frame and I was not.

“I’ve never made that mistake again, where I’ve taken someone lightly.” “

Three months later Kennedy was back in the cage, this time to meet Jody Burke at Warriors Challenge 16. Still burning from the Smith fight, Kennedy took his anger out his opponent. “I wanted to kill him,” he says. Forty-four seconds into the fight, Burke was tapping out to punches.

“It was the dark era of MMA,” Kennedy says. “I hit him in the direct back of the head.”