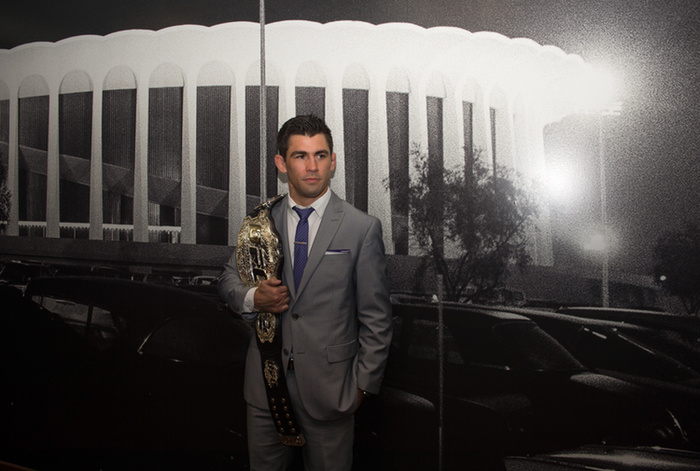 Dominick Cruz’s popularity has soared since his successful return to the sport after an unfortunate period that would have forced others to hang up their gloves.

The returning former champion’s victory over TJ Dillashaw in January was celebrated as one of the greatest feats achieved in the sport after his five-year spell of suffering career-threatening injuries.

It’s not the same Cruz that has returned, though. While his efficient movement and elaborate timing, hallmarks of his style, are still present, there is a new mentality to the bantamweight champion that is endearing fans to him more than ever. As impressive as it is that he has remained the top 135er in the world despite his absence, Cruz’s awareness of how the fight game works is the most notable string he has added to his bow.

An expert analyst on the sport, Cruz has been celebrated for his understanding of the subtleties of combat. However, it might the business behind the fight game that he knows best since his return.

“There is more to this sport than fighting, and you either understand that or you don’t,” said Cruz at the UFC 199 media day earlier this week. “If you don’t then I promise you the guys that are worth money don’t want to fight you because you don’t get it.”

As Cruz sees it, there are two prime examples of how you can rise to glory in the fight game:

“With that (approach), it doesn’t matter if I win or lose fights. I’m still famous and I’m always going to get the big fight because the media wants to see it. So there are two different approaches you can take.

“I respect Demetrious Johnson’s approach and I respect Conor McGregor and Ronda Rousey’s approach, but I think the best in the world, as the sport continues to evolve, will be able to find a happy medium between both.”

The bitterness some of the UFC’s roster hold for Sage Northcutt was evident based on social media following his first loss under the banner. Even though Cruz understands their mindframes, he is adamant that any fighter can build their fame based on the stage that UFC gives their athletes.

“I can understand the bitterness, but it doesn’t necessarily do you any good to be bitter. You have two choices, you can take what you’re given or you can build with what you’ve got. I choose to build with what I’ve got because I’ve still been given a stage. I still have cameras in front of my face when I want them and I plan to run with it.

“I’m not going to sit and be sad about what other people are getting because that doesn’t get you anywhere in life except sitting and crying, right where you are, like TJ Dillashaw.”

Cruz also noted that his growth during his time out was one of the keys to his emphatic comeback. The champion claimed that he embraced the fact that he was going through hardship knowing that it would make him a better person for coming through the other side of it.

“Going through these surgeries and the bad fortune I’ve gone through has made me realize one thing; you have to accept the bad things and make a great thing out of it because you will actually bask in it and enjoy it if you take it for what it is. It will make you a stronger person.

“I took those injuries and I grabbed on to them and I said, ‘you know what, this is going to make me better, I’m not going to allow this to hold me back any longer’. I didn’t want to put a freeze on my career and have other people saying ‘Dominick could’ve done this if he wasn’t hurt. That didn’t happen.”

“All those years I was gone, I used them very well. I used them efficiently to become a stronger person, mentally and physically. I evolved with those experiences.”

Cruz’s star will shine even brighter if he manages to claim the decisive victory in his trilogy meeting with Urijah Faber on June 4 at UFC 199. And given his eye for business, a victory could set up a super fight with ‘Mighty Mouse’ Johnson, who will want to get revenge for his sole UFC loss at the hands of ‘The Dominator.’

How Dominick Cruz Killed the King