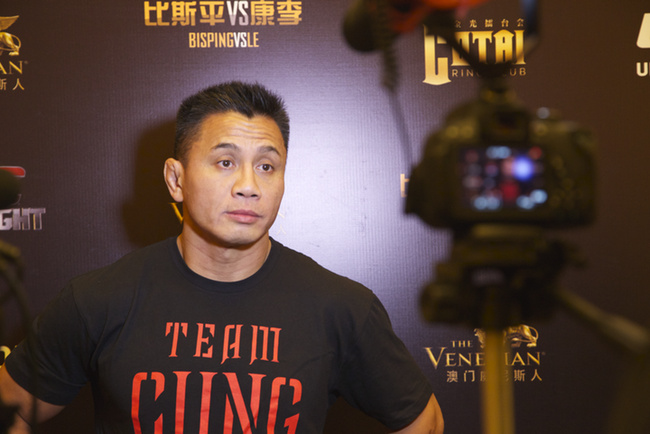 Cung Le loves to talk about food. Candy bars mostly. He told reporters in Macao for UFC Fight Night 48 that he and his BJJ coach Javier Gonzalez wrestled over a candy bar on Thursday because Le “just wanted to sniff it.” Back in the day, Le would have popped the snack into his mouth and gone about business, but now, after almost 20 years of professional fighting, Cung Le and his camp have discovered the wonders a tweaked diet can perform on an old man’s body.

“Trust me I do feel my age, I do feel I’m 42,” said Cung Le. “But I’ve been taking care of myself for a long time. The only thing I feel bad about really, was that in the past my diet was horrible. I felt like I could be 20 forever, and I felt like I could go and eat double, triple cheeseburgers, and a milkshake and still train.”

Cung Le has had problems with injuries and conditioning throughout his career. He had a cracked rib going into the Wanderlei Silva fight, and was chubby for most of his others fights, including the Cote and Franklin fights. Some of the injuries—to his foot, knee and elbow—led to sympathy gorging that just made matters worse.

“I was bummed out that I couldn’t train how I wanted (due to injuries), you know, you get sad, you get upset, you get depressed, so you start feeding yourself chocolate and then you’re like holy shit, I’m 15 pounds overweight.”

“After the Rich Franklin fight... I realized I can’t keep putting this wear and tear on my body, I’m going to have to change up my diet, change the way I train, and I have to change up my philosophy. So I found this personal trainer named Matt Allen, he got on my diet, he got on how I lifted—God, I didn’t realize I was lifting weights wrong—and he worked on my strength and conditioning, making sure that every meal was weighed out. The first two months were horrible for me, but once I started seeing the results, seeing the fat burn away, I realized that it all came down to diet.” 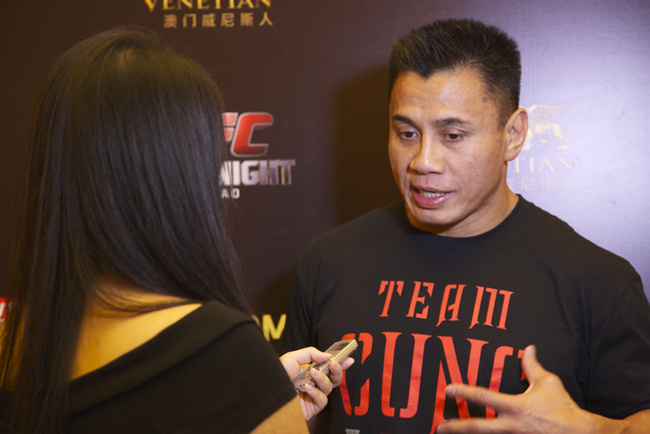 It took about six months before the diet really kicked in, building lean muscle and cleaning up years of bad habits, but by then Cung Le had a ten week fight camp to look forward to, and he was already in much better shape than he had been for the Franklin fight. During strength workouts, Le and his team placed a lot more emphasis on resting his body, on exploding up into bench presses to better simulate real fight situations, isolating and combining muscle groups, and alternating between slow- and fast-twitch muscles. Getting up and doing cardio first thing in the morning, before breakfast.

“In Vietnam I spent ten days out there, and every workout was only one hour and, just by being in the heat, I was losing 6 1/2 pounds every time I worked out,” Le said. “Of course I put it back on, but by the time it was almost over, I was so shredded.”

The results are evident in an Instagram shot that made the rounds on the Internet. When people saw how ridiculously jacked this 42-year-old man was, they started pointing the finger at PEDs of some kind. Michael Bisping got into it, telling reporters that he “hoped [Le] had done it the old fashioned way,” and before long the UFC decided to give both fighters enhanced blood and urine tests before Saturday’s fight.

“I’m in fight shape, you know,” Cung Le said. “People can talk all they want, there are other pics, one where I have this vein in my neck—I’m veiny. And none of this happened over night... this is over a year of me training strength and conditioning, rehabbing, and dieting. So trust me, I feel guilty with my pizza, or chocolate. Man if I eat chocolate, even if it’s just one cube, I’m in the garage doing cardio. People can say whatever they want, but they should just get off their asses and go work out.”

So you’re ready to take any tests?

“I’ll pee right now for them.”

Scott Sheeley, who coaches Matt Brown and has been running Le’s camps since the Cote fight, pushed Le to get a bunch of injuries fixed up after the Franklin fight—surgery on two elbows and rehab on his knee—and that’s what he credits for the marked improvement in Le’s fitness. With the injuries taken care of, Le could put in more work and focus more on functional strength conditioning, and some wrestling work that was put to the side before the rehab.

“I feel [Cung Le] is the best he’s ever been,” Sheeley said. “He’s in the best shape technically, strength-wise, mentally. He’s 42 and I see what he’s doing to guys in the gym and I he can definitely compete at this level. “

What’s up with old man strength?

“It’s intelligence really,” said Sheeley. “When I was younger it was about drive, you know, just train train train. And now it’s about intelligence. You know, recovery is just as important as training, diet is just as important as working out. It’s just a matter of getting everything dialed in, nutrition and training, and not just training harder but training smarter.”

Cung Le does seem like a wise old lion, in the prime of his life, enjoying every moment of his first big fight in almost two years. The Chinese fighters love him, and he treats them like his kids; his camp has been with him for 20 years, so they have a studied comfort about them. Cung Le’s BJJ coach Javier Gonzalez said the chilled out vibe of the team is a reflection of who Cung Le is himself, a very easy person to talk to and hang out with. Like your friend’s cool ass dad—veiny and shredded—who’s also prone to drop a few wise nuggets when you least expect it.