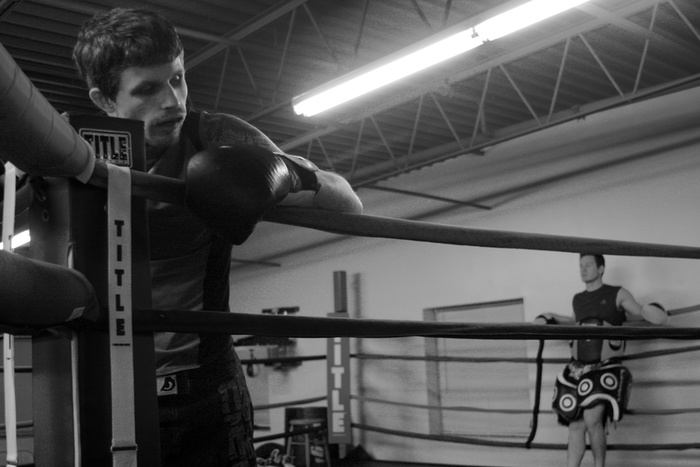 Derek Varin after a training session with Chris Cichon at the Cellar.

Legacy 51 in Hinckley, Minnesota is, above all, Brock Larson’s farewell party. Last time he was in Hinckley, Larson lost in front of his students and hometown fans to a tough kid from Texas. Now he’s back to avenge his loss and leave the competition part of the sport in front of people he’s trained and grew up with his entire life.

Brock Larson might not be a household name for most fans of the sport, but there is not a single mixed martial artist in Minnesota who doesn’t know and respect him as a foundational member of the community. He fights out of the Minnesota Martial Arts Academy, but his own gym is in St. Cloud, a city few hours north of the Twin Cities famous for nationally ranked wrestlers coming out of St. Cloud State. At Brock’s gym, the Performance Compound, young fighters learn how to blast a double leg, carry their opponent over to the corner, and beat them into submission. Or, if the opportunity presents itself, use Larson’s trademark kimura to end the fight.

That’s what northern Minnesota martial arts is really all about: desperate trench warfare in a confined space as two fighters wrestle for position. Brock is from Brainerd and his longtime training partner Jacob Volkmann is from Fergus Falls, both frigid flat farming towns on I-94W heading north toward Fargo and ending at Canada’s Lake of the Woods. Here northern European migrants drove out the Natives and created communities based around church, state, and wrestling.

This is where Dana White and Matt Serra will be tonight as well, looking for a fight in the middle of the frozen north. They’re not here to watch local heroes Brock Larson and Jacob Volkmann though, that ship sailed years ago. If anything, they’re rooting for Volkmann’s opponent, Antonio Trócoli, a Brazilian mixed martial artist on a tear through the regional promotions of both his home country and this one. 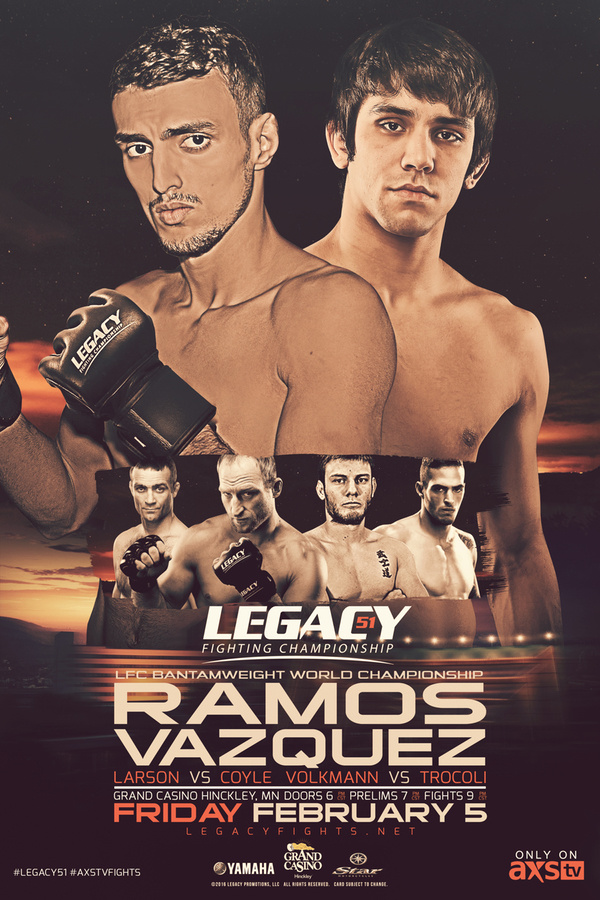 Trócoli’s countryman Ricardo Ramos will face Manny Vazquez for the Legacy bantamweight belt Thomas Almeida left behind when he stepped up to the UFC. Do either of these fighters have the potential to follow in Almeida’s footsteps? Dana White and Matt Serra are here to find out.

Or maybe they’re interested in a battle of two former refugees, Sudanese fighter Kuchlong Kuchlong and Liberian Nate Togbah Richardson. This is also a fight of two gyms, the Academy versus the Cellar, in a Twin Cities rivalry that flows from promotion to promotion across the Midwest. Richardson escaped ahead of Charles Taylor’s armies in the early 1990s and made his home in the Twin Cities, alongside 60,000 of his countrymen, and found refuge in the wrestling world. He’s explosive and just starting to flow under his trainer at the Cellar, Chris Cichon, who will also be coaching Togbah on the US Kickboxing team. I sat with him at the Cellar and we laughed about how the promoters put two refugees against each other for this card, Did they know what they were doing?

“I don’t know man, but they probably hope there’s going to be fireworks,” Nate said. “And there will be, trust me.”

Asplund is a slab of concrete out of South Minneapolis who looks like a bar room brawler, like a throwback to the old UFC days when skill hadn’t yet caught up with grit and heart. I watched him spar at the Cellar one evening and his boxing is slick and relaxed, fun to watch: the type of slip and tag you'd expect from a man who’s been fighting for more than 15 years. If you’ve read the book Thrown, then you have an idea of the kind of fighter Kevin is: last second call-ups to fight ringers, able to take a ton of punches, thudding power in each hand. But after brutalizing heavyweights on the Midwest regional circuit from 2002 - 2011, Asplund had a streak of losses: eight of his last nine from 2012 to April of last year.

Derek Varin is a northern Minnesota boy who braved the city for the last few months getting ready for his first fight since September of 2014. He is fighting a former gym mate Billy Christianson on this Legacy card.

“It doesn’t matter,” he said a couple weeks ago when he learned Dana White would be in attendance. “I just want to get back in there, fight again, you know? Be on the same card as Brock for what’s probably his last fight. That’s really what it’s about.”

It's a sweet deal for Varin to be on his mentor’s last card. Now all of the time away from his guns, boats, and four wheelers, which resulted in a much better striking game under Chris Cichon’s tutelage, will be worth it. Another Minnesota stand-out, Derek Getzel, won’t have the chance to dazzle the big boss of the sport tonight. His fight with R’Mandell Cameron is off the card. Getzel beat both Varin and Christianson and is probably in the top five welterweights in Minnesota. Hard to know when he’ll have another chance like this.

And yet, there might be some fighter right now doing his pre-fight ritual who will wow the crowd in Hinckley and raise eyebrows among the big-whigs who are here with their scouting reports and cameras, someone out of the blue who just feels it tonight and puts on the performance of his life. Will it lead to UFC fame and cash like it did for Randy Brown out of New York or Sage Northcutt out of Texas? Or will it be a flash of light on the tundra, destined for the Midwest fighter lore book and nothing more?

Guess you’ll have to tune in to the next episode of the UFC’s “Looking for a Fight” to find out.

The Muscle Shark Lives On: Catching Up With UFC Vet Sean Sherk