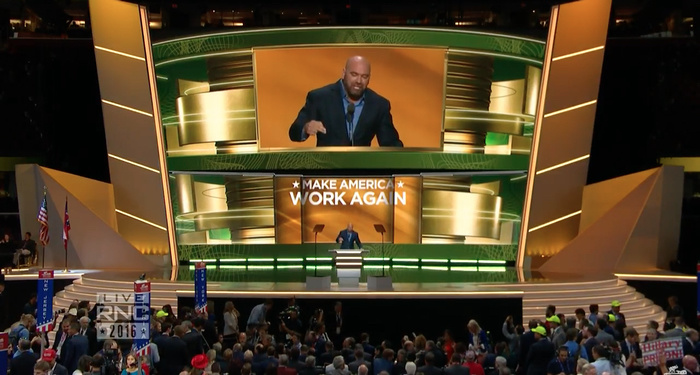 As Melania Trump’s Republican Convention speech plagiarism controversy metastasized yesterday into yet another national story about the questionable competency and seriousness of her husband’s presidential campaign, long-weary Republicans, faced with yet another news cycle dominated by an unforced Trump error, were looking for anything to buoy their spirits. Lucky for them, salvation came early on day two of the convention, and in an unexpected form: a four-minute, way-before-primetime speech from a professional mixed martial arts promoter who started his speech by admitting he has no political interests. Say what you will about Dana White’s presence at the Republican convention, no one could ever accuse him of plagiarizing anything, and that’s exactly what Republicans needed after the nightmare that day one had become.

Saved by the brash, apolitical sincerity of a cage-fighting promoter. Who would have guessed?

The reason I knew White hadn’t plagiarized anything was that his speech was so purely Dana White. 100% unfettered and unfiltered Dana White, minus the curse words, of course. Anyone who’s spent any time following MMA over the last decade would have recognized the content and delivery blindfolded. Actually, the speech was even more than 100% Dana White, as the UFC president shouted his speech at the small audience gathered in the Quicken Loans Arena, thrusting the words out of his huge barrel chest, muscles larger by a magnitude than anyone who would take the podium over the next three days, as if he were threatening people, daring them, to challenge his opinions about the character and loyalty and business acumen of Donald Trump. This was the angry-at-the-media Dana White we MMA fans all know and tolerate turned up to 11. It was Dana White as archetype.

White told the small early evening (and perhaps confused) crowd that it was Trump and Trump alone who had supported the UFC in the early Zuffa days, when White and his partners, the Fertitta Brothers, had just purchased what was for all intents and purposes a national disgrace (a “blood sport,” as White called it) and a money pit that no one in his right mind wanted to be affiliated with — giving the struggling promotion a shot by putting their first two events on at his Taj Mahal casino in Atlantic City, granting it an early legitimacy and opening it up to the mainstream success it enjoys today. “DONALD WAS THE FIRST GUY THAT RECOGNIZED THE POTENTIAL THAT WE SAW IN THE UFC AND ENCOURAGED US TO BUILD OUR BUSINESS,” White shouted. Trump even attended those first events, White continued, and even sat in the front row, turning the mogul’s need for the limelight and lust for the most expensive things in life into proof of character (an argument Trump must have adored and might even steal before this election is over). “YEAH, HE’S THAT GUY,” White continued. “HE SHOWS UP.” The speech was passionate and heartfelt. It was thunderous and muscular. It was deafening.

Which makes me think that White was protesting a bit too much, that his volume was a symptom of his ambivalence, that as a self-confessed apolitical being, he may find Trump’s beliefs reprehensible, but out of personal loyalty to the man he felt he had to pre-emptively defend himself as forcefully as possible against the inevitable attacks that will come attempting to smear White’s affection and color him and his company with Trump’s demagoguery. So his speech was free of any mention of platforms or policies, sticking instead to clichés about American toughness and strength delivered in booming tones. “LEMME TELL YOU SOMETHING,” White said. “I’VE BEEN IN THE FIGHT BUSINESS MY WHOLE LIFE. I KNOW FIGHTERS. LADIES AND GENTLEMAN, DONALD TRUMP IS A FIGHTER, AND I KNOW HE WILL FIGHT FOR THIS COUNTRY.”

But White is a smart guy, and he must know that in an election such as this and with a candidate such as Donald Trump any affiliation with the real estate mogul will be seen as a political act. Which is why, battling through any squeamishness he might have about the mass deportation of undocumented immigrants or unconstitutional bans on Muslims, he went out on the stage at the Oracle Arena, grabbed onto the podium, and roared his speech to the world in an act of defiant self-hypnosis, to convince himself as much as anyone that you can in fact separate your personal loyalty to a man from his reprehensible political views, and to show the world that he would tear into anyone daring to try and tell him different. It was classic Dana White, and it was just the kind of bullying brashness Trump loves.

Anyway I hope that’s what was going on.