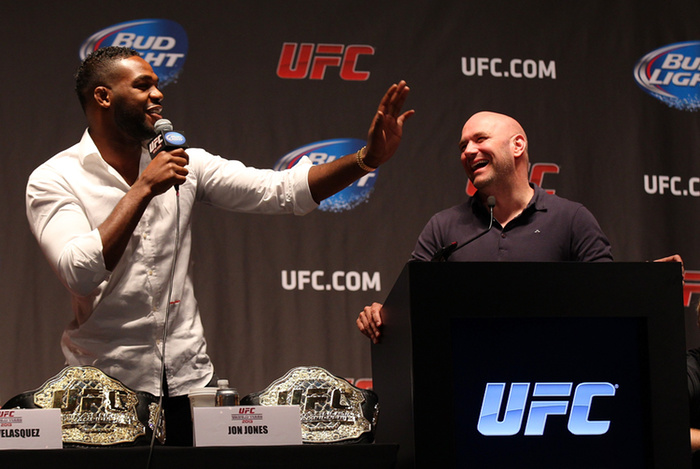 The epic unraveling and re-raveling of the career of Jon “Bones” Jones never runs out of twists and turns. Just when you think the former UFC light-heavyweight champion is gone for good and the door shut on one of the greatest but most disappointing careers in MMA history, UFC President Dana White lets you know that things may not be as clear as we thought they were.

Yesterday during interviews on ESPN and The Jim Rome Show White confirmed the “announcement” made by Jones earlier this week on Instagram that he could be returning to the Octagon “really soon” and that he was getting “lots of really good news” regarding the failed drug test that led to his being kicked off the main event of UFC 200 in July.

"He's not wrong," White told ESPN SportsCenter. "Things have taken a turn, and it's looking a little more positive than that. … It came out that he had tested positive for something that you get on when you come off of steroids, but that might not be the case now."

On July 8, one day before Jones’ scheduled main event title fight with Daniel Cormier, USADA, the UFC’s anti-doping enforcer, announced that Jones had tested positive for banned substances as part of an out-of-competition drug test administered on June 16. Those substances—Hydroxy-clomiphene, an anti-estrogenic agent, and Letrozole metabolite, an aromatase inhibitor—are often used to counteract the negative side effects of anabolic steroid use. The fight was called off, UFC 200 was a bungled affair as a result, and Jones’ reputation as a once-in-a-generation athlete with the self-control of a teenager was solidified. Not even a tear-filled, apologetic press conference in which Jones repeatedly protested his innocence could do anything to halt the narrative that Jones’ fighting abilities were no match for his talent for self-destruction.

But yesterday White told Jim Rome that it looks like Jones’ story—that he never knowingly took the banned substances—might have been true all along, and that all our long-cultivated skepticism about Jones’ protestations was misplaced.

“It’s coming back now that it looks like that he did not take the supplement that everybody thought he took, and we will see how this thing plays out,” White said. “I don’t even know if this is public. I don’t know if I can talk about it. Normally, I talk about anything, but when it comes to medical stuff you can’t do it, but it’s looking like Jon Jones did not do, take the drug that everybody thought he took. It looks like it’s something else. So I’ll let this thing play out, and that if that’s true and that’s what USADA and the Nevada State Athletic Commission says happened, it could look good for Jon Jones.”

Not that this gets Jones off the hook, of course. It’s a fighter’s responsibility to make sure the supplements he’s taking aren’t tainted and his job to report everything he ingests to USADA, neither of which the former champion, who should either know better or pay people to know better for him, didn’t do. Which means while he may not get a two-year suspension, he likely won’t get off scot-free either. As White pointed out yesterday, a sin of omission is still a sin, both in the eyes of the Catholic God and the ledger book of USADA, especially when the sinner is Jon Jones, a man who’s already come dangerously close on numerous occasions to ruining his career over nothing and squandering the goodwill of MMA fans in the process. Best not, then, to play the victim.

“He definitely didn’t get a bum rap,” White said. “Where he doesn’t come off clean is you have to tell USADA everything that you put in your body leading up to the fight and he did not.”

Still, White admitted, Jones “has, like, 12 lives. It's unbelievable."

Jon Jones Expects to Be Back in the Octagon "Really Soon"