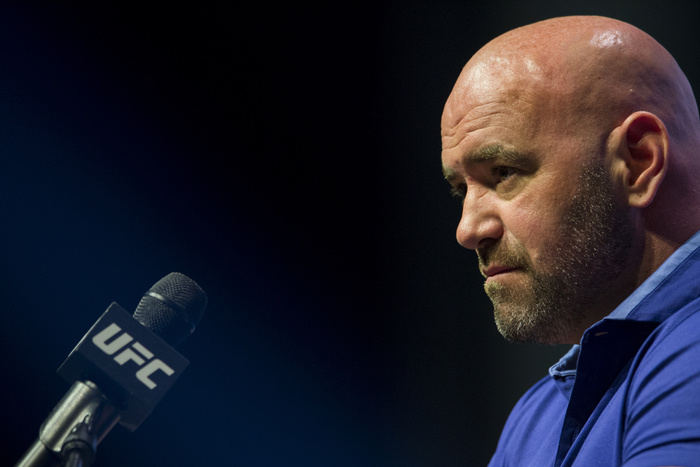 Earlier this week we reported that a former UFC press flack had been hired by Donald Trump to run his presidential campaign’s rapid-response operation. Well, today in uncomfortable political/MMA dovetailing news, it looks like UFC President Dana White will be speaking on Trump’s behalf at the Republican National Convention next week. Which is one giant step for White, one huge leap for mixed martial arts, and one depressing kick in the teeth for those of us hoping MMA was growing into a civilized member of society.

According to the New York Times, which obtained the still-unofficial speaking roster and confirmed it with “two people with direct knowledge of the convention planning,” White’s speech is just one small part of a four-day extravaganza of racial paranoia, political conspiracy, rabid nativism, B-list sports personalities, scandal-mongering, and sex obsession. The convention will kick off Monday night with yet another look at the Benghazi disaster, followed by a speech by a U.S. senator who has said his only problem with the prison at Guantanamo Bay is that “there are too many empty beds,” and over the following three days will feature a presentation detailing (again) the sexual misconduct of former President Bill Clinton (which will go nicely with the anti-porn plank of the Republicans’ new party platform) and speeches by NFL washout/famous prayer Tim Tebow, professional golfer Natalie Gulbis, several rabidly anti-immigrant/anti-Muslim politicians, and just about every member of Donald Trump’s family.

White, who opens night two of the convention, “economy night,” has a relationship with Trump that goes back 15 years to the early days of the Zuffa-run UFC. Back then it was Trump who gave the UFC and its fresh-faced new president a chance by opening up his Trump Taj Majal hotel and casino to the promotion, which at the time was hemorrhaging money and sinking under the weight of public disgust. With Trump’s support the UFC was able to make moves to bigger venues and begin the long climb into cultural legitimacy. Fifteen years later it looks like Trump is calling in the favor, like Don Corleone telling Bonasera to clean up Sonny’s bullet-riddled corpse in The Godfather. Good for Dana White. Friendship and loyalty are wonderful things, as are devotion to civic duty and active participation in our American democracy. Public speaking is also a nice thing. The economy is good too.

But while White and Tebow and Gulbis are relatively big names, the Republican convention schedule may actually be just as notable for which sports figures aren’t speaking. Last month Trump told a crowd in Richmond, Virginia, that he was looking to turn the convention into a “winner’s evening” featuring “some of the great sports people who like me a lot,” including NFL quarterbacks Tom Brady and Ben Roethlisberger. Sure enough, two weeks later Bloomberg Politics was reporting that the campaign had lined up such sports luminaries as former Chicago Bears coach Mike Ditka, former college basketball coach (and choker of teenagers) Bobby Knight, NASCAR CEO Brian France, and Mike Tyson (though no Brady or Roethlisberger). Apparently none of them made the cut, or were available, or felt they could express their love for Donald adequately within the confines of a convention speech.

But perhaps the most disappointing speaker to not find on the list was Don King, or “Big Don King,” as Trump calls him. At a rally earlier this month Trump said he had asked the boxing promoter and convicted murderer to speak at the convention because he “beat the system, and he’s a friend of mine.” How perfect would a speech by the irrepressible, poetical, expository, felonious Don King have been at this year’s Republican Convention? But alas, King is nowhere to be found, replaced perhaps by astronaut Eileen Collins or a small gang of border control agents. Maybe Trump decided that one fight promoter was enough.

So next week we’ll get Dana White and not Don King speaking at the Republican National Convention, which is either further proof of the rise of MMA and the decline of boxing in the American popular imagination or evidence that boxing, for all its troubles, is still wiser in the ways of the world than the still-young MMA and better at keeping its distance from black holes of misery and despair.