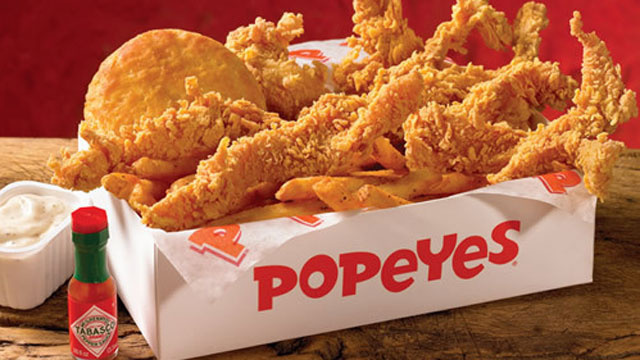 Last Wednesday, when Rashad Evans’s bum knee had Daniel Cormier bummed out at the prospect of not fighting at UFC 170, Cormier walked up to the counter at a Popeyes Louisiana Kitchen franchise to feed his depression. Apparently he'd spent the last months training and dropping all kinds of weight for nothing. He had a hunger for four pieces of chicken and Cajun rice. He also had tears in his eyes. “Am I crying because I didn’t get to fight, or am I crying because I took my ass to Popeyes?” Cormier asked an audience of reporters recently when recounting the experience, before answering his own question: “Both.” Cormier said the meal was as good on the lips as it was hard on the stomach, but by the next day, he had a new opponent in Patrick Cummins and a compelling reason to get down to 205 pounds for the first time in his MMA career.

So what kind of damage did he do with one meal? According to Popeyes's own nutrition facts, the combined calorie count of four pieces of Bonafide Mild Chicken (wing, leg, thigh, and breast) is 1090 calories with 3040 milligrams of sodium. We’ll assume Cormier got the large Cajun rice, which has 510 calories and 1590 mg sodium. All told, Cormier could have had around 1,600 calories and 4,630 milligrams of sodium in a single sitting. For what it’s worth, the United States Department of Agriculture recommends adult males limit caloric intake to 2200 calories a day, and the American Heart Association recommends a daily intake of 1,500 milligrams of sodium or less. Whatever disclaimers you want to throw in about the caloric needs athletes have that desk jockeys don’t, that’s a lot of crappy food to have pulsing through your veins.

One call to his nutritionist, three consecutive gallons of water, and seven days later, Cormier says that moment of weakness has been purged from his system. Nonetheless, he’s tentatively planning a return to Popeyes after he leaves the cage. “Probably Sunday,” he says. Gastrointestinal distress be damned.

Alex Karalexis and the Art of the Weight Cut