Danny Garcia Is Ready to Make Some Noise as a Welterweight 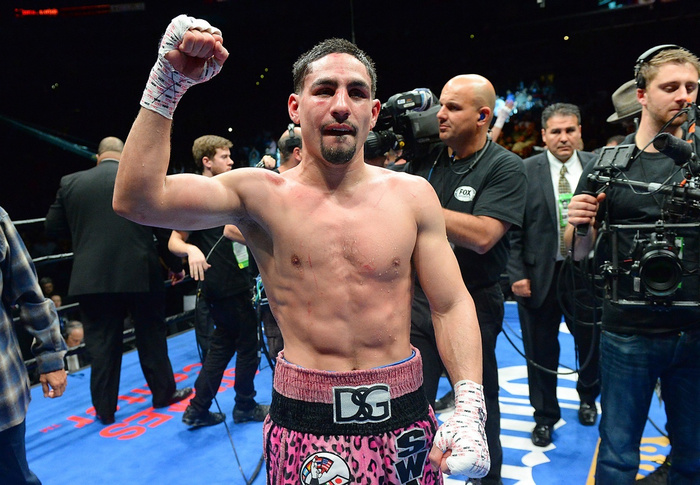 For nearly 20 years, Angel Garcia has taught his son, Danny, the finer points of boxing inside and outside of the ring. The partnership has worked out about as well as anyone could have hoped, and Danny Garcia is currently the undefeated WBC welterweight champion. But while the younger Garcia listens to his father, he hasn't adopted Angel's flamboyant style. In fact, the two couldn't be more different from a personality standpoint. Danny Garcia is mild-mannered, determined, businesslike, and happy to let his results speak for themselves. Angel is...not that way. HIs own son calls him "Crazy Angel," and many others in boxing have called him much worse.

Last Saturday night, though, their partnership was perfect. Danny Garcia channeled some of father's showmanship to hype what is shaping up as one of the fights to watch for 2017. After a decisive seventh round TKO victory over Samuel Vargas, Garcia climbed each corner of the ring at Temple University's Liacouras Center and raised his arms to an exultant hometown crowd. NBA Hall of Famer Allen Iverson and rapper Meek Mill, both Philadelphia royalty, escorted Garcia to the ring and watched as he dominated what most boxing heads considered a tune-up for what will likely be the biggest fight of Garcia's career.

That was the fight that Garcia was screaming about when he came through the ropes and directed a brief and pointed message at Keith Thurman, who was doing color commentary for the Premier Boxing Champions bout on Spike TV. Thurman, the undefeated WBA welterweight champion, didn't back down from the verbal sparring session, and the two have already made a date for their fight. But Garcia (33-0, 19 knockouts) and Thurman (27-0, 22 knockouts) aren't scheduled to fight until March 4. That their trash talk has already begun suggests that things could get awfully noisy by the time the two get in the ring—and perhaps that a little bit of Angel has rubbed off on his otherwise low-key son.

"I said he's next and prepare himself for his ass-whoopin'," Garcia said. "That's all I told him."

The two picked up the verbal fisticuffs in the ring after the fight. "Hey, Philly," Garcia told the crowd. "If ya'll want to see me whip this guy's ass, make some noise."

After the fans went crazy, Thurman returned the favor with a knock against Garcia and Vargas, whom he considered a weak opponent. "I'm of a different caliber," Thurman said. "I'm not no cherry. I ain't no easy pickins, boy."

It's worth noting that less biased parties than Thurman have made this criticism of Garcia. The Vargas bout was Garcia's third since he jumped from junior welterweight (140 pounds) to welterweight (147 pounds), and he's been criticized for not challenging himself since moving up. He scored a ninth round TKO over Paulie Malignaggi in August 2015 and won a unanimous decision over Robert Guerrero in January to win the WBC welterweight title, which Floyd Mayweather had vacated last September when he retired.

Angel Garcia said his son should have started fighting as a welterweight after what was arguably the biggest win of his career, a unanimous decision victory in September 2013 over Lucas Matthysse. Garcia won two of his next three fights at junior welterweight via majority decisions and had trouble making weight for all of them. "It was time to move up [after Matthysse], and we didn't move up," Angel told VICE Sports. "I was being stubborn."

Garcia is seen here not getting punched. Photo by Jayne Kamin-Oncea-USA TODAY Sports

Those close calls haven't shaken Angel's faith in his son. During a news conference two days before the Vargas fight, Angel was vocally upset with Garcia's place in The Ring magazine's rankings, which have Garcia seventh in the welterweight division. He called out Oscar De La Hoya, whose company owns the magazine; Golden Boy Promotions, which De La Hoya also runs, represented Garcia until January 2015, when Garcia moved on to Al Haymon.

"Tell Oscar to throw that magazine away," Angel Garcia said. "C'mon, man. Oscar, are you serious right now? He should be number one in the world, brother."

As of now, that point is debatable, particularly considering Garcia is in a stacked welterweight division that includes Thurman, Manny Pacquiao, Kell Brook, Timothy Bradley, Shawn Porter, Amir Khan, and Errol Spence, Jr. And then there's Mayweather, still unbeaten and restless enough to hint at a comeback whenever the mood strikes him. Garcia said his dream matchup would be against Mayweather, but he's willing to fight anyone.

"When I moved up to 147, I just wanted to unify the titles, whoever was the champion," Garcia said. "I unified 140. I wanted to do it again at 147. I want to put myself in the history books as a great Philadelphia fighter. Unifying another division is gonna put me in that league."

Garcia took a step in the right direction on Saturday, albeit against an opponent hand-picked to serve as a tune-up for March's Thurman fight. The fans chanted his name and got the victory they came for, but Garcia barely broke a sweat.

With 18 seconds remaining in the second round, Garcia landed a right hand to Vargas's face that sent Vargas falling to the canvas and flipping over. Vargas got up a few seconds before the round ended. Although Garcia didn't knock down Vargas again, he dominated the rest of the fight. When Garcia connected on a right-left combination that had Vargas reeling against the ropes, referee Gary Rosato finally called the fight with 43 seconds left in the seventh round, giving Garcia the TKO victory. "He wanted an easy fight," Thurman said when it was all over. "He got an easy fight. I ain't no easy fight."

Garcia admitted he had trouble concentrating solely on Vargas leading up to the fight. Thurman was on his mind, too.

"I can't lie," Garcia said. "There's a couple times I woke up in the morning and I was just thinking about both fights, fighting them in the same night. I felt that adrenaline in me."

After a short hiatus, Garcia plans to pick up his training again shortly after Thanksgiving. For the next three-plus months, he will be preparing for Thurman. A victory in that bout would help silence Garcia's critics, but it might also announce him as a different type of fighter than he's been to date. Garcia normally doesn't respond to trash talk, let alone instigate it. If his zealous smack talk after dispensing with Vargas was an attempt to promote his matchup with Thurman and prove he's someone casual sports fans should keep an eye on...well, it's hard to see how he could have done that any better, either.

His father then interrupted him.

"It's like Donald Trump says," Angel Garcia said, "It's about change, brother."

Is Heather Hardy’s Move to MMA the Beginning of the End for Boxing in NY?