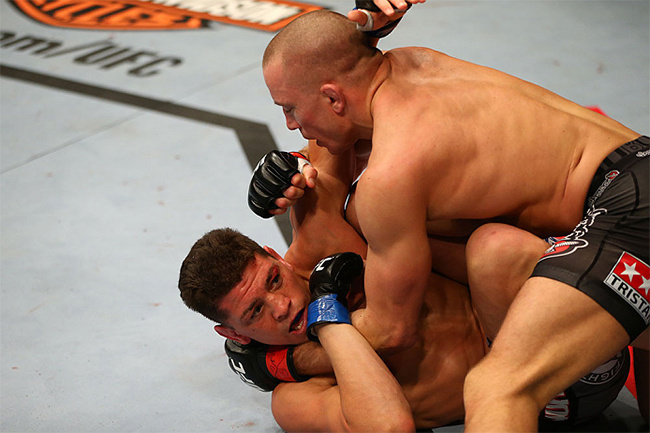 Last week, before UFC 159 in Montreal, I rhapsodized about the sublimity that is UFC welterweight Nick Diaz at a press conference. This has always been the case with Diaz but it was particularly true when the target of his verbal attacks was Georges St-Pierre, who’s that particular kind of human being who prides himself almost entirely on his ability to stay unruffled by the twists and turns of life. Diaz, of course, is the exact opposite: He embraces (or at least resigns himself to) the chaos of existence. I think the reason Diaz’s trash-talk against GSP was so effective (at ruffling the champion’s feathers, if not actually pushing him off his gameplan) had less to do with the content of the words than with the way in which they were spoken. GSP’s whole life (from his training to his marketing strategies, to his "passive income") is a study in straight lines, in hospital corners. Anyone with a friend who lives at such compulsively right angles knows the best way to get under that person’s skin isn’t to question his manhood or talk about his mother but to leave a banana peel on the kitchen table. Nick Diaz’s rambling, shambolic, catch-as-catch-can verbal attacks on GSP weren’t effective because they made GSP doubt himself; they were effective because they were rambling, shambolic, and catch-as-catch-can.

Now that the two longtime rivals have fought their fight, and GSP proved once and for all that he is the most eerily unflappable man to ever fight inside a cage, I worry a bit about Nick Diaz. I fear that without an antagonist, he’ll be a man without purpose. Facing life without the great white whale that is GSP, without that perfect target for his particular kind of verbal abuse, could leave him dangerously unmoored. Like Al Pacino in Heat, all Nick Diaz is, is who he’s going after.

You saw it after the fight was over. The first thing Diaz did after losing was announce that he’ll most likely retire. He looked humbled; he congratulated St-Pierre. All was wrong with the world. Then, 20 minutes later, during an interview with Ariel Helwani, that wonderful patented Diaz blend of antagonism and paranoia resurfaced. Diaz had excuses (he slept too much, the time change conspired against him), accusations (the GSP camp used illicit press photos of Diaz’s training camp to devise their strategy), trash-talk (“He hits like a woman”), and sudden bluster (“I want a fuckin’ rematch!”). All in all, it was the kind of wonderful, bizarre show we’ve come to expect from Nick Diaz.

Things seemed less amusing at the post-fight press conference, however. There, Diaz’s braggadocio felt unhinged from reality, like the loss had knocked him off his equilibrium, leaving him lost in space. Sure, he still captivated the media by trying to bait GSP into a rematch and making vague threats about retiring. But there was no life behind it this time, and if you couldn’t see the sadness behind the madness, you were blind.

“But you know, I could sit out here and make a million reasons why I didn't do well, but ... you know, I was trying to time this whole, you know, hours delay between the US and here (Canada), and I was so confused. I just wish I woulda had some kinda coach telling me 'Listen, you're gonna have to go to sleep dude!' Cuz I was like 'Should I stay up? Should I go to sleep?'”  -- Nick Diaz

“I've never paid taxes in my life, I'm probably gonna go to jail. That's not because I don't have, that's not because - what, nobody wants to hear about that, nobody wants to hear about that kind of talk, or what's really going on with me. But I might as well just be a kid, you know, I've had fight after fight after fight after fight, you know. You don't know what that does to someone who didn't graduate high school. You don't understand. Everyone has to take that - well, nobody has to do shit, but you can take that into consideration for a second, think about what three fights a year will do to you your whole life.”  -- Nick Diaz

As I said last week, it’s hard to know with Nick Diaz how much of what he’s saying is real and how much is designed to maintain an image. But for the first time ever, I felt nothing but depression listening to him speak. It’s one thing to pride yourself on the fact that you (unlike your opponent) aren’t pampered, that you aren’t “buttered-up” or paid attention to. That you’re hated. For Diaz, that kind of embittered victimhood is fuel. It’s another to admit to the world that you’re a child who can’t take care of himself, that you need someone telling you when to go to sleep, that you haven’t paid taxes (and will probably be hearing from the IRS now that you mentioned it on television). Diaz didn't sound like a victim anymore; he sounded lost and alone.

Diaz is right, of course: We had never considered the effect a life spent fighting could have on a mind that hadn’t developed past high school. We had never thought to equate that kind of mind with that of a child. We had never seen the consequences. Maybe we just did. How depressing.