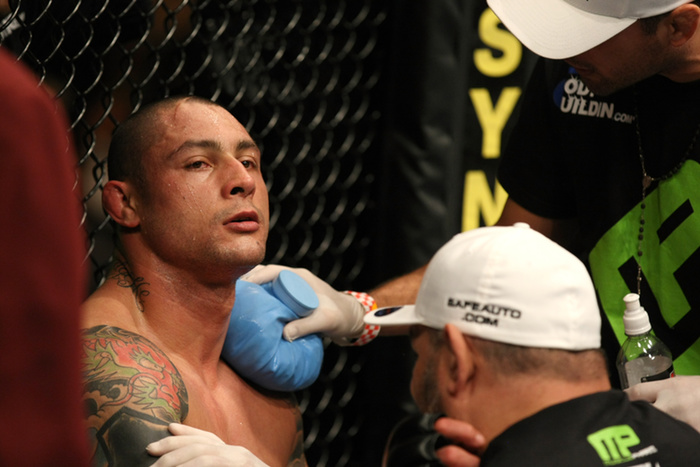 Watch enough MMA fights and eventually you become numb to all the terror and violence at their heart. You start to see past the tattoos and shaved heads and bloody noses and world-lashing anger and begin to recognize the technique and the art behind the madness and the human beings behind the brutes. Soon you forget you’re watching fights at all. At this point in my life, a UFC event doesn’t feel much more like violence than a basketball game or a sketch comedy show.

There are always the exceptions, though, and every MMA fan has their bugbears, their bogeymen, their fighters that seem to tap into some primordial fear in them. No matter how many fights you watch these fighters in and no matter how many interviews they sit for, you never quite lose your fear of them. They tap into something both deep in your psyche and early in your MMA-watching career, when every fight seemed like the most terrifying/thrilling thing in the world and proof of the fragility of human civilization.

Thiago Silva was that fighter for me. Despite the fact that he was never the best fighter in his division, much less the UFC, something about him resonated with me on a primal level, like he had anger and violence in him that went far deeper than the sport, far deeper even than fighting. He seemed capable of true, deep-down, sinister violence, murder even. He horrified me and captivated me at the same time. Compared to him, better fighters like Georges St-Pierre and Anderson Silva seemed like pretenders to the world of violence, athletes and artists playing at being killers, tourists in the world of causing pain. Thiago Silva, however, always seemed steeped in pain, both feeling it and causing it.

My fears seemed to be confirmed back in September, 2014, when the longtime UFC light heavyweight was arrested on charges of attempted murder and aggravated assault with a weapon after allegedly storming into a jiu-jitsu gym in Florida with a gun and then barricading himself in his home, resulting in an armed standoff with a tactical SWAT team. Word spread of spousal abuse and death threats. Every suspicion I’d had about Thiago Silva seemed to be coming true.

But those charges were all soon dropped and Silva was allowed back into the UFC. Not two weeks later, though, Silva’s estranged wife published video footage of the fighter in his home holding a gun and another seeming to show him high on cocaine, and once again Silva was out of the UFC, left to tumble down the ranks of the minor leagues, first losing via TKO to Teddy Holder in the World Series of Fighting and then, this last Friday night, to journeyman Marcus Sursa in something called the Gladiator Challenge. Just two years after knocking out Rafael Calvalcante in the co-main event of a UFC card in his home country of Brazil, Thiago Silva, MMA’s scariest man, star of my nightmares, primeval Thiago Silva, was getting laid out by a fighter I’d never heard of in some small town in Missouri.

Prize fighting is a cruel game. We all know that. A couple of bad knockouts or a failed drug test or simply the ravages of time and aging, and a former champion or world-beater or walking terror is reduced to a shell of his former self, tossed aside by indifferent promotions and fickle fans and opportunistic opponents, left to haunt the shadows and dark corners of the fight world in small shows in tiny towns for no money. When darkness falls on a fighter it falls hard and it falls for good.

That Thiago Silva may be gone, laid low in some lonely cage in St. Charles, Missouri, but his legacy lives on, a bridge to a darker, more dangerous, more frightening MMA era that is—in the age of Reebok and Sage Northcutt—no more.

The Agony and the Ecstasy of the Fighter's Wife