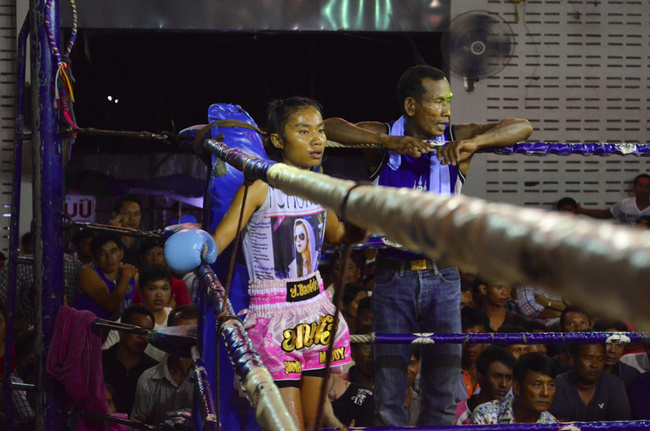 [On a Saturday fight night in Isaan's Maha Sarakham Province, I watched a skinny teenage fighter named Joy emerge the victor against a decidedly heavier opponent. A few days later, she was training again at Giatbundit Gym in preparation for her next fight. After a warm-up run through the rice fields with the gym's other fighters, Joy slipped into the ring to hit pads with her father, a sinewy trainer and former fighter named Comb. What follows is part of Comb and Joy's story, drawn from conversations we had during local fight nights and over dinners on the floor of the gym.]

Joy: My father is the reason I am a Muay Thai fighter. He used to be a fighter when he was my age, and now he's a trainer at Giatbundit Gym here. He used to tell me stories when I was a kid about how he'd travel around to all these different places to fight. It sounded amazing, and I wanted to experience that too. I remember when I was little, he would tell me Muay Thai was good because it was an art you could use to protect yourself.

Sometimes people ask me if my father pressured me into fighting because he was a fighter when he was younger, but it's actually the opposite—he tried to discourage me. I started training with him when I was 14, and at first he kept telling me I wasn't good enough to fight, said maybe I'd never be good enough. We just kept on training together, though. He said it was my perseverance that changed his mind. I've fought about 12 times in the last year since he started allowing me to fight. I'll be 18 soon, and I'm in my last year of high school, so I fight in addition to being a full-time student. 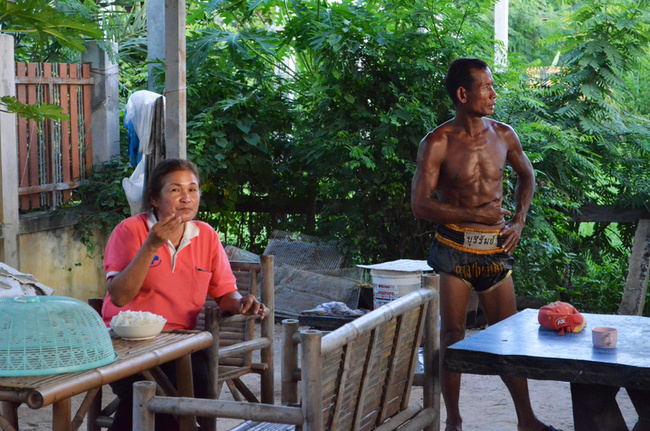 Comb: You want to know the real reason Joy is allowed to fight? Because her mom can't say no to her! Joy gets whatever she wants from her mom. One day she told her mom she wanted to start fighting, and her mom gave in. Luckily, she'd already been training a while at that point and was doing well, so I agreed to it. She was never one to give up; she's too tenacious for that.

A few years ago she came up to me after training and said, "Okay Dad, I want to fight." I used to be a fighter so I was happy to hear it, but I warned her that fighting hurts a lot, but if you don't train, it's going to hurt even more. This didn't discourage her at all.

I think most female fighters in Isaan fight because they actually want to fight, not because someone's pressuring them. It's just generally not a common path for women. For a lot of boys, I'd say the drive to fight is about half personal motivation, half coercion from the family. Many of the boys who fight are brought up in this Muay Thai life and don't actively want to do it, but just learn it passively because it's part of the lifestyle. Kind of like how you learn the language of the household in which you're raised. 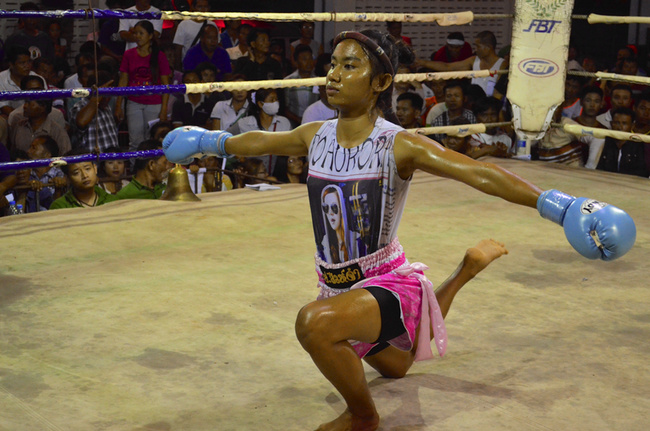 I wasn't surprised when Joy said she wanted to start fighting. I've known she could be a fighter since she was a little kid. She's the baby of the family. I would watch her beat up on her older brother, and he'd just kind of put up with it. Now her brother is 21, and she still beats him up on him whenever he comes home to visit.

As far as technical strength goes, Joy's knees are her specialty. But it's her personality more than anything that helps her win fights. She's pretty fearless and she doesn't back down or give up, and that's what could take her far in the Muay Thai world. I have a lot of confidence in her. She says she wants to go to college and become a nurse, and I support that. Even if she wanted to focus solely on Muay Thai, I would support that too.

Joy:  I am definitely going to college to be a nurse. I plan to keep fighting while I'm studying at university, though. I want Muay Thai to be a part of my life forever, but I'm not sure in what form. Dad wants me to be a champion, he says. And yes, I want to be a champion too; I love fighting. Another reason I fight is because I'm trying to save money for university. If I win the fight, my dad tips me out about 1,000 baht or so (US $31) from his winnings on the side bet. That always makes me fight harder, knowing my dad placed a bet on me. I want to make him proud of course, and I also want to earn us extra money!

Comb:  I got no problem betting on my daughter, but only if her training is going well, and if I know a little about her opponent. Conditioning is important in this game; as her trainer, I need to make sure she's conditioned properly and ready for the fight mentally. 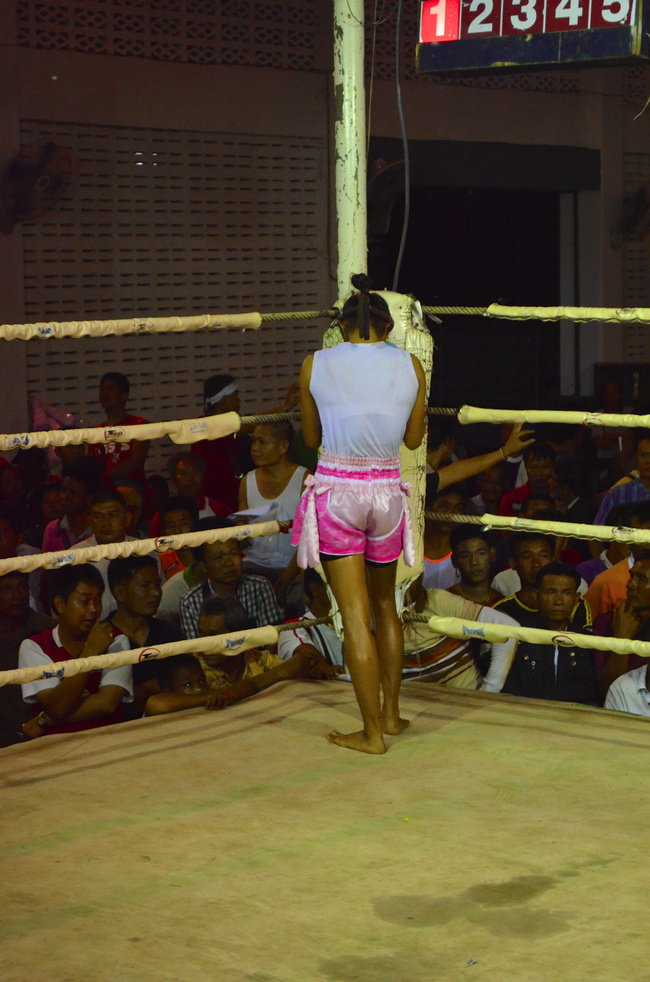 [A few months after the original interview, I followed up with Joy to see how things were progressing. The following stories were related to me privately when her father was not present.]

Joy:  My last fight was rough. The first two rounds were slow but already I was feeling overwhelmed. In Round Three my opponent came out hard and aggressive, landing every shot. My father stormed off during this round, just left my corner, left me.

Halfway through the third round, I returned to my corner because I got something in my eye. That's when I realized my father wasn't there, and one of the other fighters from my gym had to wipe my eye for me. I didn't know what happened to my dad. No one told me anything; there was no time. I tried to jump back into the fight but I just couldn't do it. Barely another minute went by before Mr. Dit, my gym's owner, came up and stopped the fight.

When I walked out of the ring and my father wasn't there, I knew I had let him down. It is was weird, seeing Mr. Dit there for me at the end of my fight instead of my dad. I was scared Mr. Dit was going to be furious that I lost but he said it was okay, that I did well considering the other girl was much more experienced. After the fight, I started thinking about everything that happened, remembering all the arguments I've seen between my father and Mr. Dit. I don't want to be the cause of their conflict.

My mother helped me shower and get changed after the fight. I didn't see my dad for another hour until he finally came back. He didn't want to talk much. I was worried about everything. About what the gym would think, about the money we'd lost on the side bet, about letting my father down. 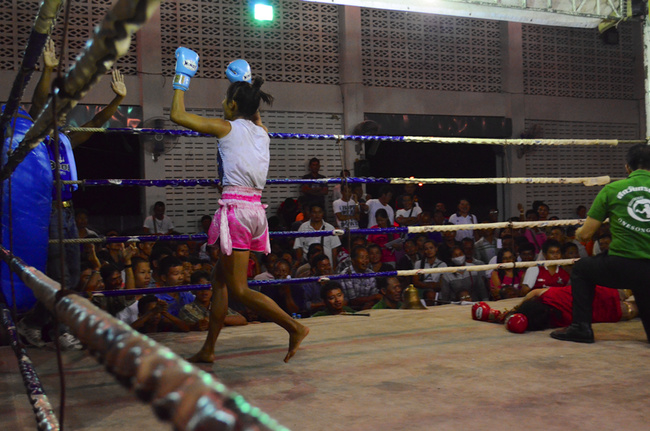 A few days later, I went back to the gym because I have another fight coming up soon. Since I've been back, I've been hitting pads with other trainers. Normally I'd train only with my father, but now things are changing. I'm not sure if I like it, to be honest. I've signed with Giatbundit Gym for eight years, and I overheard some of the trainers talking, saying that Mr. Dit is happy to keep me contracted here at the gym, but that my father needs to relinquish some control if he wants me to keep training here.

I don't know what to make of all of it sometimes. I love training with my father; I trust him, I know his motives, and he pushes me and takes care of me. But when my trainer, my father, is having conflict with others in the gym, especially the managers and the gym owner, what am I supposed to do? How can I keep training as usual?

I feel torn. He is my trainer, but he is also my father so I have to listen to him. He has a temper and says whatever's on his mind. Training at home, where it's just the two of us, is so different than training at the gym, where we have to think about keeping the peace with the other trainers and the owner. I know my dad and Mr. Dit were good friends, but now they're arguing over my fights. I can't say anything so I just keep quiet and hope for everything to be okay. 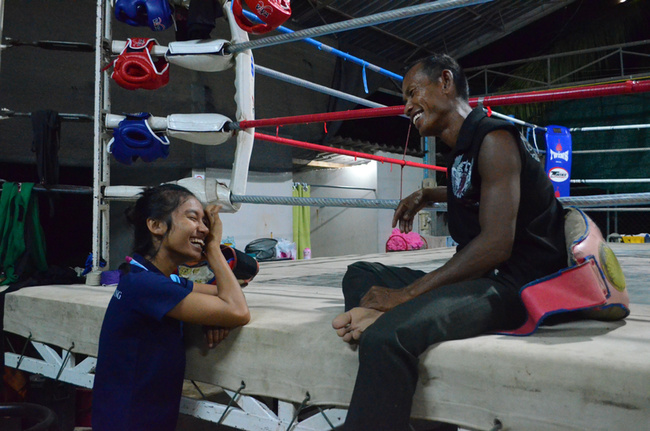 This last fight wasn't the first conflict they've had over me. A while ago, just after I'd beaten an experienced opponent, my father was fighting with Mr. Dit, saying I didn't get paid enough, even though my purse was more than any of our gym's other fighters on that same card. Mr. Dit said I'm not ready for bigger, higher-paying shows and that I need to gain experience first on these smaller shows. It turned into a huge argument.

Mr. Dit wants me to work with other trainers now but it feels awkward when my dad is there too. Everyone tells me something different and it's hard to process it all. I like training with my father the best. I trust him and I feel comfortable with him. He is all heart, and as his fighter, I have to give him everything I have in training. If you don't meet him halfway, you can't work with him. He's one-hundred-percent in it all the time, so you have to give him your all too.

But it can be scary. My dad wants me to be a champion, and I want that too. I love fighting, but it's a long way to go.

In Old Issan: The Genesis of a Muay Thai Gym Owner