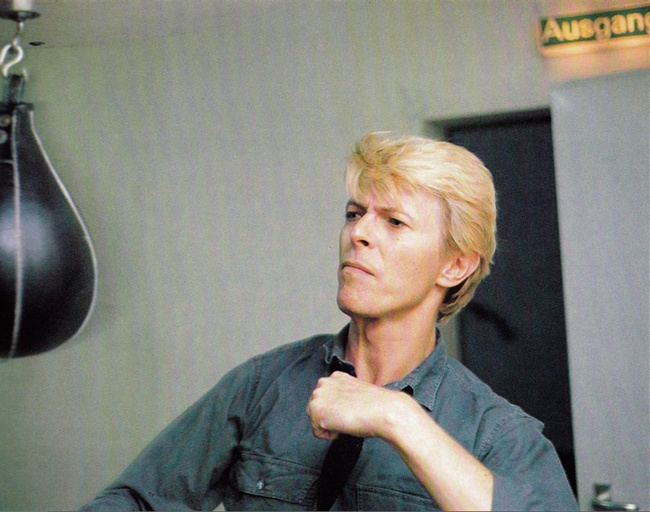 Austin, Texas is a city so steeped in cultural history that even its most beloved boxing coach, Richard Lord, has a musical connection. It might not mean much to the devout boxing fans who continue to train under the former pro—they’re fare more interested in the time that he spent working with famed boxers Jesus “El Matador” Chavez and Anissa “The Assassin” Zamarron. But for the local college population and the music lovers who flock to Austin year after year, Lord is impressive for an entirely different reason: he taught David Bowie how to box.

The chameleonic rock star was no stranger to pugilism when he recorded his fifteenth studio album, Let’s Dance, and prepared for the subsequent tour in Dallas. He was a fan of the sport and its influence on him occasionally crept into his work, most notably when he donned a pair of bright red boxing gloves during the Diamond Dogs tour in 1974. He’d also been on the receiving end of a fairly well-trained punch as a teenager.

In a story that should earn the sympathy of anyone who’s fought or sparred in MMA gloves, Bowie sustained a lifelong pupil injury when his longtime friend George Underwood (who went on to do cover art for Bowie) punched him for winning the affections of a girl they both liked and accidentally gouged him in the eye. 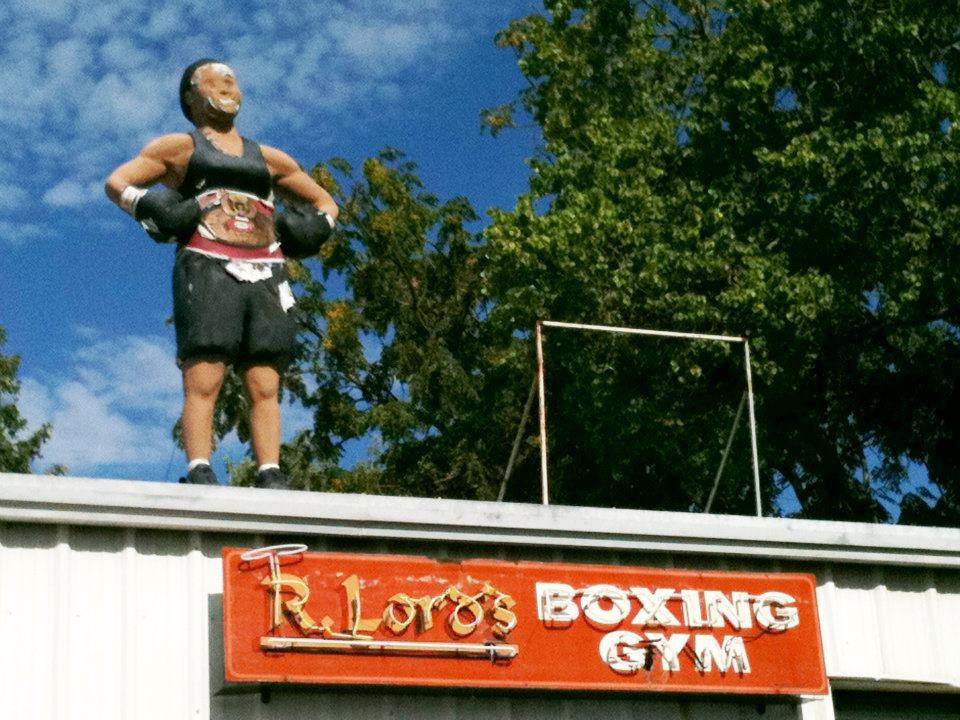 “I remember the day because my father came home very agitated and told the story of one of his pupils hit the other one and there was a fight or something and I heard that [Bowie] had to be taken to hospital but that’s all I knew I didn’t actually see it happen,” schoolmate and fellow musician Peter Frampton told CNN in 2013. “But the unfortunate thing is that as well as teaching art my dad also taught boxing and George was in his class so I think my father felt rather responsible!”

But it wasn’t until 1983 that Bowie seriously learned to fight back. Eager to get in shape to face the grueling demands of a world tour and disinterested in most forms of exercise, Bowie turned to the sweet science. And when one of his Texas handlers told him about Richard Lord, a local Golden Gloves boxer who trained by running up and down the steps at the University of Texas stadium, The Thin White Duke knew that he had his man. 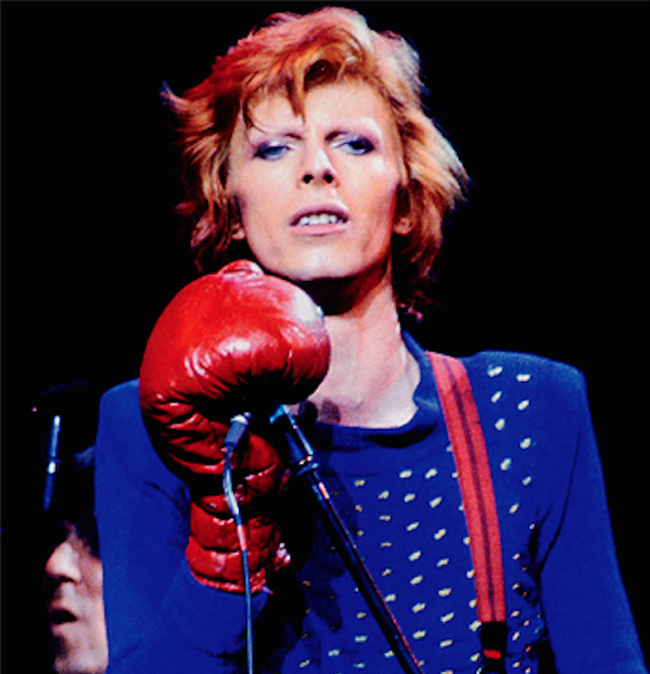 Richard Lord had been a local legend since his own days as a student at the University of Texas in the mid to late seventies. When Lord wasn’t studying, he was busy competing as an amateur boxer, winning the 1979 and 1980 Golden Gloves Championships. He turned pro soon after that. Both during and after his professional boxing career, Lord trained everyone from elite fighters to hobbyists on the side. As long as someone expressed a genuine interest in the sport—whether it was a champion like Jesus Chavez, a pioneer like women’s boxing star Anissa Zamarron, a curious child, or a larger than life rock star—he was willing to give them a try. Lord was also instrumental in helping to establish and organized the first all-women boxing match sanctioned by United States Amateur Boxing in 1993. For a period of time, he ran a pizza shop in South Austin. Guitar hero Stevie Ray Vaughan was a big fan of the carrot cake that Lord baked and sold there.

Bowie wasn’t aware of the man’s baking prowess at the time, but he was impressed enough by the rest of his resume and his training regimen to give him a shot.

"When Ziggy Stardust called Lord, the trainer nonchalantly agreed to take the rocker under his wing, and the two trained together for a couple of months. Bowie ran the steps and then worked the heavy bags at an old gym on 12th and Jefferson streets in downtown Austin,” Adam Pitluk writes in the book Standing Eight: The Inspiring Story of Jesus “El Matador” Chavez. “Bowie developed such an affinity for boxing that he even tried his hand at sparring. ‘I’m one of the few people that punched David Bowie in the face and didn’t get the shit beat out of me for it,’ Lord said. Bowie was photographed for the cover of his Let’s Dance album wearing boxing gloves and striking a pose that was quite similar to the stance Lord used when fighting on the pro circuit.” 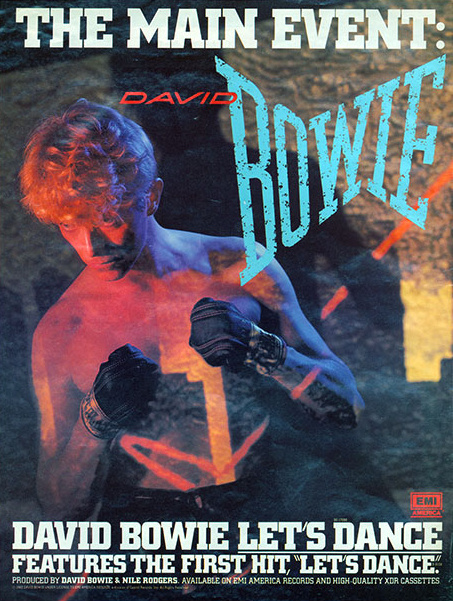 Lord occasionally hung out with Bowie’s band during their downtime, including a guitarist that Bowie had hired to play on both the album and the tour named Stevie Ray Vaughan. “As the band rehearsed one day in Dallas, Vaughan spotted Richard and announced that the fitness expert made one outstandingly decadent carrot cake. Soon Richard was baking treats for members of the band,” W.K. Stratton writes in the Anissa Zamaron biography Boxing Shadows.

Although Bowie and Lord parted ways when the former hit the road in support of Let’s Dance, the Thin White Duke never lost his appreciation for the discipline. He continued to train on and off for the next couple of decades. “I quite like boxing,” Bowie told music journalist Clark Collins in the August 2002 issue of the dearly departed Blender magazine. “But that’s only because I use it as a training method. Just recently I’ve started again. You look at yourself and think [pat stomach] that could go. And boxing’s not so boring as pumping bleedin’ metal all day, which bores the shit out of me.”

He may or may not still be training, depending on which reports on the increasingly elusive icon’s health you believe.

Lord continues to take on all comers at Lord’s Gym in Austin. The current state of his carrot cake production is unknown.